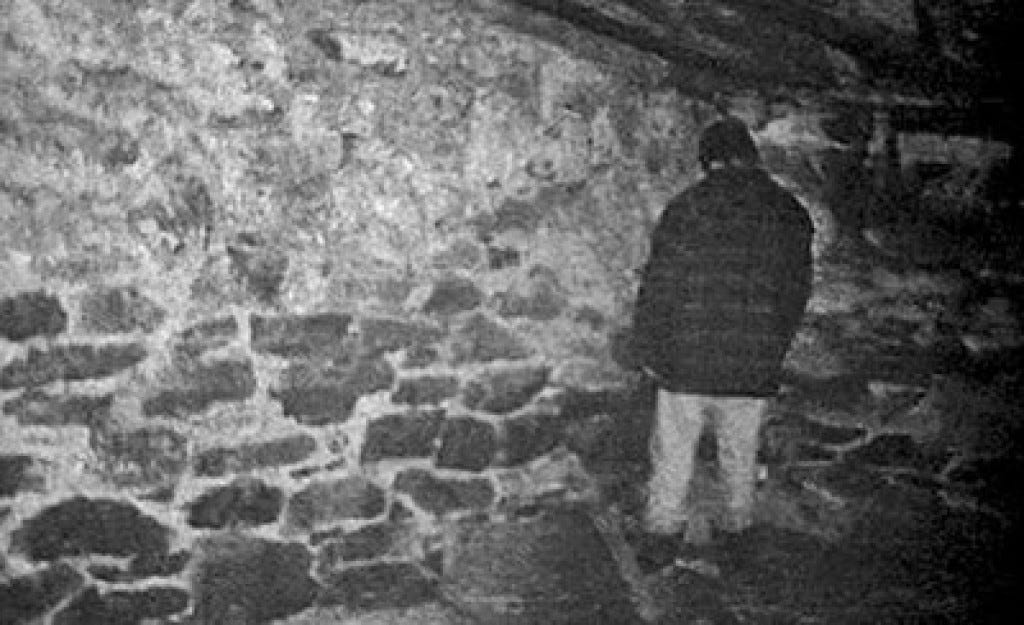 EW- The 1999 horror faux-doc about three college students — Heather, Michael, and Joshua — searching for the fabled Blair Witch in the Maryland woods was always supposed to end unexpectedly. The image is iconic now. Michael faces the corner of an abandoned house while Heather screams hysterically and drops the camera. “When we came up with that ending we had been agonizing over making sure there was a pay-off,” says The Blair Witch Project co-director Dan Myrick. “We didn’t want to lead the audience on this entire build-up and then just cut to black; there needed to be some kind of what-the-f–k moment at the end, but at the same time we didn’t want to see a person in a bad witch costume come out and grab them.”

However, that unexplained element caused some problems come test screening time. “When we screened it, people were overwhelmingly confused,” says Myrick. “However, when asked if they were scared, 19 out of 20 hands went up.” But the distributor, Artisan, was spooked in a will-this-movie-flop kind of way. “They wanted us to do something more definitive,” says Sanchez. And so they sent Myrick and Sanchez back to the trees to film several possible endings, which included Mike hanging from a noose, crucified on a wooden stick man, and with a bloodied chest. “We went back to that house with a skeleton crew and basically just shot all the endings that Ed and I threw out when we were dreaming up the script,” says Myrick.

While they were at it, the directors also shot an interview to explain Mike’s wall stare-down. “There was one additional pick up,” says Sanchez. “We shot an interview with a guy where he explains a little bit of the mythology of the killer Rustin Parr; how he would make one kid stand in the corner while he killed the others. We felt that if we stuck it in early in the movie there was going to be some audience members that would connect it to the ending.” When they took footage back to executives, the directors expressed their preference for the original ending. “What makes us fearful is something that’s out of the ordinary, unexplained,” says Myrick. “The first ending kept the audience off balance; it challenged our real world conventions and that’s what really made it scary.”

It’s not every day that an ending with college kids being hanged and/or crucified on some True Detective shit is the less scary of the possible endings. But I think that is the case here. I’m not a big scary movie guy. I’ve watched some of the classics or more popular ones like The Shining, Scream, and others so I didn’t look like a bitch when other people wanted to watch them. But the truth is I am a big pussy when it comes to things like that. I was petrified of Freddie and Jason as a kid and barely even fucked with Gremlins, which sucks because Gizmo was cute a fuck. Simply playing Resident Evil in the dark with dogs jumping through windows and those scary doors opening frightened the shit out of me. Watching people get gutted like a fish fucked my whole world up.

But I did make my way to see the Blair Witch Project. Granted, I knew it was fiction going into it. I think I had seen the actors from the movie on TRL right before I left for the theater. I remember cracking jokes in the beginning of the movie and thinking how everything was funny since the movie was meant to be a “Is it real or is it fake” type thriller. But once it got dark and weird, my soft ass shut up REAL quick. And then the ending is what really fucked me up. Just a dude standing in a corner, basically setting up his friend to get murdered. Just adding that screenshot above and the video from the house is going to give me Latvia-level night terrors tonight. Sorry Wifey.

Real scary shit (at least to a big pussy like me). Sometimes less is more and I think the ending for The Blair Witch Project is proof positive of that.