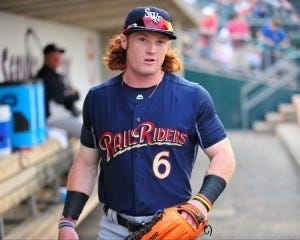 Waldman made the whole thing up and called Clint to apologize. It’s absolute bullshit that the media keeps trying to find problems with Clint when all he wants to do is play baseball. I wouldn’t be mad if she was gone for this.

Suzyn Waldman told Joe Benigno and Evan Roberts today that Clint Fraizer asked the Yankees “Do you ever un-retire numbers?” because he wanted to wear number 7 when he gets called up. For those of you who don’t know, 7 was worn by Mickey Mantle, one of the greatest baseball players of all time. This is not a good thing.

After spending camp with the big league team and around legends like Derek Jeter and Alex Rodriguez you can’t wonder if you can wear 7. After Reggie Jackson take you to get frozen yogurt in your full Yankee uniform, you can’t ask if they’ll un-retire a number a number for you. The Yankees may go over the top with some of the retired numbers but Mickey Mantle is one even Carrabis couldn’t make fun of.

This is all word of mouth coming from Waldman still, but as a Yankee fan you have to hope a guy without a single MLB at-bat and a boatload of talent, wouldn’t make this mistake. If incidents like this continue to come up, and the Yankee need a starter, Clint may find himself trading his blue pinstripes for black ones and dodging bullets on the South Side.

PS: Did Waldman really need to put this out there? As much as Clint makes young mistakes at times, the media does nothing to help him.