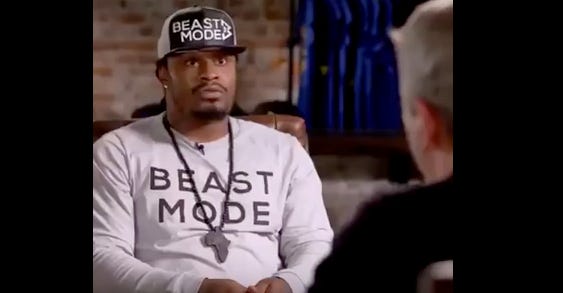 When partying around the earth, with numerous groups of humans. You build up quite a rolodex of friends from around the globe. With that being said, I have ears on the ground everywhere. I have a pal from Oakland who just told me that Beast Mode is officially in the Raiders practice facility chatting with team officials. The dream union of The Oakland Raiders and Marshawn Lynch is right on the fucking fringe of happening.

Could you imagine one of the toughest/explosive/elusive/hilarious dudes of all time playing for his hometown team before they bus off to Sin City? The Black Hole was the most incredible atmosphere I ever played in. I CANT EVEN FATHOM the addition of this guy.

When it got mentioned a few weeks ago, I immediately thought it was the perfect fit for each side. With Marshawn Lynch in the backfield, Derek Carr under center, Khalil Mack rushing the passer with Bruce Irvin, a stacked O-Line, and 1 of the best punters in the NFL controlling field position. The Raiders are primed for a championship run, excited for the fans of The Oakland.