Things can get overstated on the internet, it’s what we do, but I agree wholeheartedly with everything said in this video. When you’re a hockey fan it’s everything, it’s in your veins and your blood and your heart. Every sport you played you “grew up with,” but hockey is just a little different. You braved storms, got up at 4 AM, spent countless hours driving across the state with your dad, ripped open your hands tying skates in biting weather, put on wet, cold gear before the second of a back-to-back at a tournament, built camaraderie with teammates in locker rooms where other sports only had rumors about what actually goes down in there. Every sport you played had a part in creating the man you are, but hockey was the one who actually raised you. Hockey was the constant parent, every other sport was a fun uncle.

That’s why, in my opinion, nothing matches the passion of a hockey fan and nothing matches the passion of the NHL playoffs. Everything in life is just better with playoff hockey. The weather is warmer, early season Red Sox games feel more important because they’re lumped in with the electricity coming from Causeway, the beers are colder, and the sundresses are flowier. Spring of 2011 was the best season of my life because of playoff hockey and I’m ready to fall in love all over again. This video was a good start. It’s got my heart fluttering and I’m hearing wedding bells for the first time in a while. I’m feeling feelings again, goddammit, and I couldn’t be happier.

Playoff hockey is back in Boston and if we’re doing tears of joy then I’m here for it. I didn’t need this video to get me all the way amped, but it sure as fuck didn’t hurt.

PS – Who threw these skates for this shot? Dangerous job. 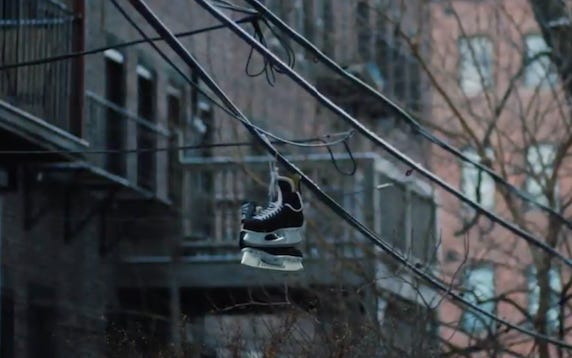