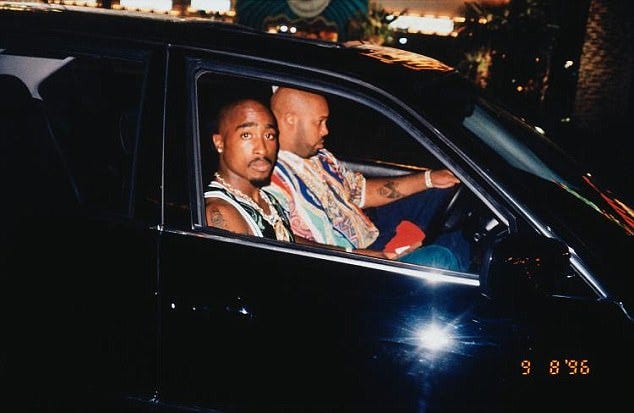 The Source- Suge Knight has claimed that he was the real target of the 1996 drive-by shooting that killed rapper Tupac Shakur, and that his ex-wife and former Death Row Records security chief were behind it. In a signed affidavit, Knight’s attorney Thaddeus Culpepper reportedly wrote that the record producer has known “for many years that Reggie Wright Jr. and his ex-wife Sharitha were behind the murder of Tupac and attempted murder of Knight”. Culpepper added that Knight has also alleged details of Wright’s involvement in the shooting of Shakur’s nemesis, Christopher “Notorious B.I.G.” Wallace – in 1997. The former CEO of Death Row Records was with Shakur on the night that he was killed in Las Vegas in ’96.

Knight, who is currently behind bars awaiting a separate murder trial, has always refused to reveal the identity of the person he believed was responsible for Shakur’s death. He is apparently speaking out now after hearing the “salient points” in the new documentary Tupac Assassination: Battle For Compton, which was directed by Richard Bond and Michael Douglas Carlin.

What kind of shit is this? All I have been taught my entire life is that snitches get stitches only to have the hardest dude in the world point a finger at Tupac’s killer while also saying he played a role in Biggie’s murder. What the fuck Suge? I thought jail was supposed to harden someone, not soften them up. Am I supposed to believe the Suge read a couple of “salient points” from a documentary and completely turn on everything he believes in? I’m pretty sure Suge think salient points are a type of bullet. The only thing I can think of is that Suge is now looking for his own documentary deal. Or better yet, he has figured out a way to strong arm the people that made the documentary into paying him a hefty royalty fee just because that’s what Suge Knight does. This is all just a way to get people talking about the doc that he has equity in. Because you don’t go from the Boogie Man to a snitch just because you wore orange for a while.

As for Suge being the main target, I don’t think I can live in a world where Suge Knight knows the people that tried to kill them and he let them live. That goes against everything I have ever learned about Suge Knight. And regardless of whether it’s ture or not, making a story about Tupac’s murder about yourself sure reminds me of someone else…

Oh yeah and Tupac is definitely alive and living in Cuba. Everyone knows that.

*This blog will likely be deleted by me if/when Suge Knight gets out of jail just to be safe.