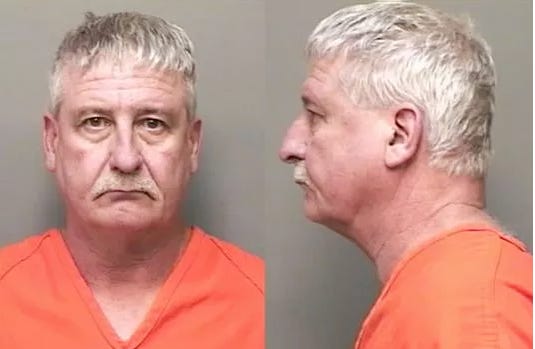 A man wearing a bra threw water balloons at a Tennessee state trooper and then led him on a high-speed chase, reaching speeds of 100 mph, on Sunday according to an arrest warrant.

Alan Brian Prisby, 57, of Decatur was arrested and charged with evading arrest, driving under the influence, implied consent violation, reckless driving and speeding.

According to the warrant, Tennessee Highway Patrol Trooper Julio Lasalle was checking the Welcome Center when he saw a maroon Jeep Wrangler parked in the commercial vehicle parking area.

“When I approached the open car door the subject was wearing a white bra and he removed a second water balloon and tried to bust it on the ground near my feet,” Lasalle wrote in the warrant.The balloons had been in the man’s bra, he said.

Talk about a cocky move. First of all, wearing a water balloon-laced bra isn’t a big deal. I imagine that the water balloons on your tits makes you feel nice and cool. Spring days in Tennessee can get pretty warm. Even those most novice of meteorologists knows that. If you need to use water to cool yourself, I’m not gonna knock that, but don’t get all huffy when the police are doing their jobs. You can’t throw water balloons at a trooper’s feet. Everybody knows that. Did he do more, though? Was that all our pal Brian did to get arrested? Let’s take a look.

“The subject appeared to be under the influence. When I went back to call dispatch, the subject (backed) up and entered the interstate.”

Lasalle followed with his lights and sirens on, but the man began driving more than 100 mph, straddling the center line at times and passing other vehicles on the right, almost causing a crash.

The man exited at Exit 4, turned right onto West Field Court and finally stopped in a business parking lot, the warrant states.

Lasalle, with help from Clarksville Police, took Prisby into custody.

He had slurred speech, red watery eyes and smelled of alcohol, the warrant states.

Lasalle wrote that Prisby refused to perform a field sobriety test or a blood test.

The trooper searched the car and found an open bottle of Bailey’s Irish Cream in the car.

Ah, the delicious nectar of Bailey’s Irish Cream strikes again. One minute you’re spiking your coffee just a little bit and the next thing you know, you wearing a bra filled to the brim with water balloons and speeding down the highway at breakneck speeds. Sometimes you get the Darty and sometimes the darty gets you.