Sports Illustrated- The Barkley Marathons consist of five 20-mile loops (although sometimes they tend to be longer) within Tennessee’s Frozen Head State Park. It’s arguably one of the toughest ultramarathons in the world and just 14 men had previously finished the 100-mile race under the 60-hour cut-off.

Participants have to locate pages from books that have been scattered throughout the park. This ensures that the participant followed the race map. Each runner is given a race number to correspond with the book’s page that they need. Competitors get a new race number and a new page requirement for each lap. There are no aid stations or markers so runners must follow a map that is provided the night before the start.

Gary Robbins, a runner from North Vancouver, B.C., was not so lucky. He reached the finish line just six seconds over the 60-hour cut-off time. He was unable to locate the finish and headed in the opposite director before he realized his mistake. Robbins collapsed at the finish line with all the required pages.

Oh, endurance sports. A gathering of the biggest hardos on the planet. As Kenny Powers said, “I play real sports. Not trying to be the best at exercising. Fuck this guy.” And this race is extra weird. You prove you ran the track by ripping out pages from random books along the way. 100 miles, climbing up mountains in the woods, 60 hours non-stop. The product of some sadistic old guy who found a map and started drawing random circles on it and thought, oh, a race!

Watching this video, I know that some of part of me is supposed to feel bad for him. Guy just had the worst weekend of all time. 60 hours of exercise in the freezing cold, rain, climbing up mountains and shit, doing the same 20-mile loop 5 times in a row. And he missed the “finish” deadline by 6 seconds! 6 seconds is nothing!! I’m not much of a “stamina” guy but I’m pretty sure I last longer than that.

But then you remember that he signed up for this. He volunteered to do something that humans should only do if they’ve just escaped from a P.O.W. camp in ‘Nam. Consequently, Gary Robbins, I have to say I enjoyed watching you collapse into a puddle of your own piss. Motor functions and dignity long gone, high-pitched child voice whining about how he has all his pages. Hey Gary, you went the wrong way moron! Good luck next year, maybe work on those nav skills.

[The one finisher] Kelly, 32 himself had a dramatic finish today. Conditions were bitterly cold and the runner ended up finishing the Barkley Marathons wearing a Walmart bag he found on the course. He also sported an orange hat that he picked up along the way.

He almost didn’t make it though. After finishing, he said that he passed out from lack of sleep. He doesn’t know how long he was sleeping but knows that it was within an hour and half to the cutoff. It was the frigid conditions that woke him.

Guy passes out, wakes up because he’s freezing, throws on some trash he finds in the bushes, and gets back on the course. Gary needs to take a page out of his book. That’s a winner right there. Although again, anyone who runs this thing is still a loser. 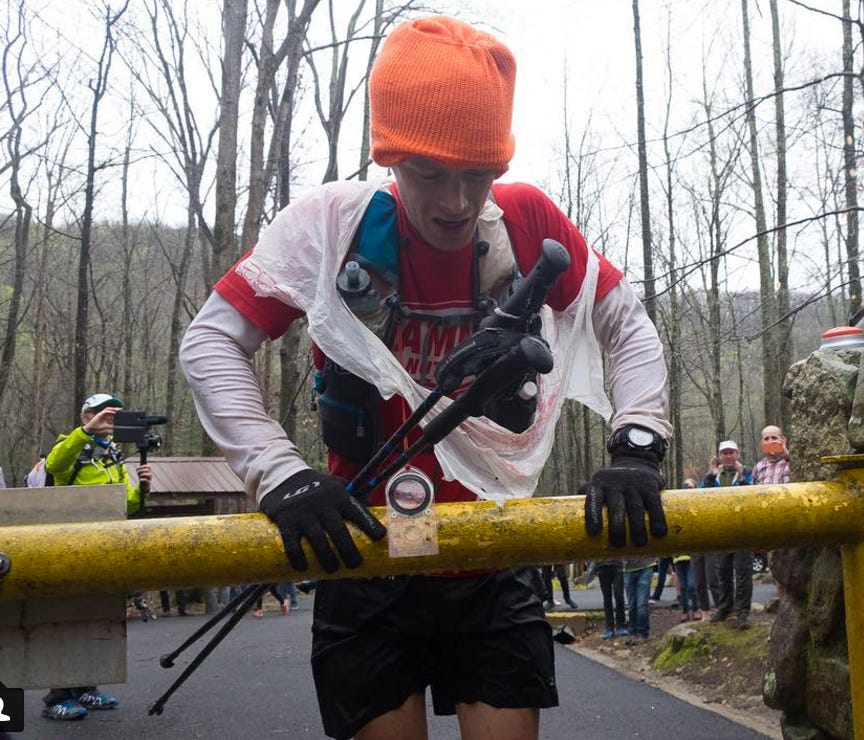