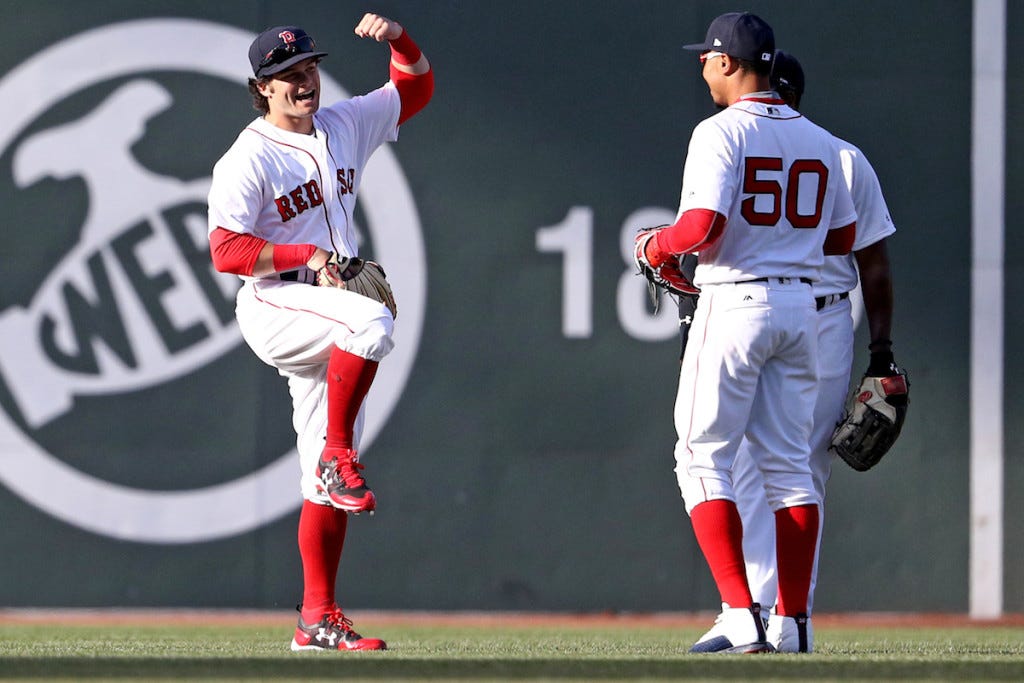 So, I’m listening to Barstool Radio this morning, minding my own business, and I hear Davey Pageviews himself on there saying something like how I’m only an X’s and O’s guy when it comes to blogging the Red Sox, and that he wants more knee jerk reaction-type stuff after big games. Dave…I didn’t stay home from Opening Day at Fenway Park ON MY DAMN BIRTHDAY to not post a knee jerk reaction blog after this game. I will, however, do the whole X’s and O’s thing tomorrow like usual, but I do have some quick thoughts after this game.

First thing that stuck out to me — the reaction that Pablo Sandoval got from the crowd during the pregame ceremony. They booed the shit out of this guy last year for showing up like a fat blob of shit, and then saying that he had nothing to prove. Red Sox fans are ruthless, but they’re fair. He trotted out there this year to cheers from the Fenway crowd today, which says a lot about how far he’s come, given how his season ended last year. That’s because he showed up in shape, said he has everything to prove, and kicked things off with a monster spring. I hope he noticed the fans giving him recognition for his change in attitude and work ethic. He also drove in the first run of the season by busting his ass down the line to leg out an infield single. New year, new Pablo.

Rick Porcello — one start doesn’t tell us the whole story, obviously, but one of the storylines coming into the season was which Porcello are we going to see this year, the dog shit one from 2015, the Cy Young award winner from last year, or somewhere in between? Today, he looked like the Porcello from last year. He gave you 6.1 innings over 96 pitches, five strikeouts to just one walk, and allowed three earned runs at the end there. Probably just ran out of gas, because he was cruising along all day. I’m rooting for this guy to prove the people wrong who think that he’s going to regress drastically. It’s not unfair to speculate that he’ll regress, but back to the point of where he was in 2015 is just way off.

Andrew Benintendi — this motherfucker BULKED up over the offseason, hence the Benny Biceps nickname. He projected as more of a doubles guy, but now I’m actually curious to see if he could eventually become a 30-homer guy. I don’t think we’ll see that this year, as it’s only his age-22 (and rookie) season, but I think he’s going to surprise a lot of people with the pop he’s going to display this year. I’d like to see him get up around 40 doubles and 20 homers this year. He certainly appears to be capable.

We’ll talk about the rest of the game tomorrow morning, as usual, but those were the things that stood out to me the most after the Red Sox first victory of the season here on Opening Day.

PS — The Red Sox got Chris Sale. He’s starting for them on Wednesday. Got a pretty decent ovation today (wicked fuckin’ loud, kid).