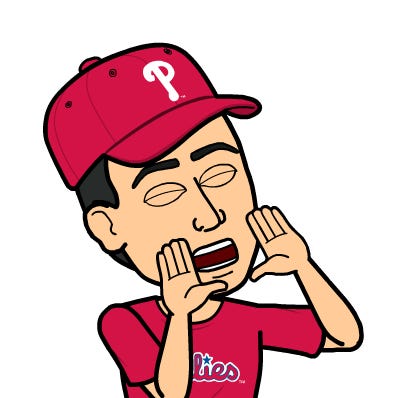 I remember just a few months back watching the Chicago Cubs in the World Series. I remember watching a team that looked as fundamentally sound as a team could be in just about every facet of the game. The first thing that came to mind when watching them play, was holy shit, the Phillies are like a minimum 10 years away from ever being this competitive again. It was a little terrifying. I lived through the late 90s, I don’t think I can handle this again. My depression was obviously at an all time low at this point. We were 5 years away from our last playoff appearance and we had just said goodbye to the last and biggest piece of our glory days, Ryan Howard.

But it’s 2017 now, baby. My trust in the front office skyrocketed after what I thought was a perfect offseason. They locked up Odubel Herrera, signed veteran Michael Saunders and traded for Howie Kendrick to lock down the corner outfield spots, while we give our 19 outfield prospects a few more months to develop. They signed two veteran arms to bolster a bullpen that was burnt out by the end of June last season. Sidenote, if Pat Neshek celebrating in the WBC didn’t fire you up for this Phillies season, well you, my friend are a heartless jawn. Oh, and we acquired Clay Bucholtz.

I’m pumped for this season. I think we have a serious shot to start turning some heads again. I’m also very biased. We have our entire farm waiting at the doorstep, we have the 2nd youngest roster in the MLB, we have plenty of money in the bank, and we have Clay Bucholtz. Gonna be a whirlwind boys and girls.

Ok, time for the nerds to bring us back to reality. 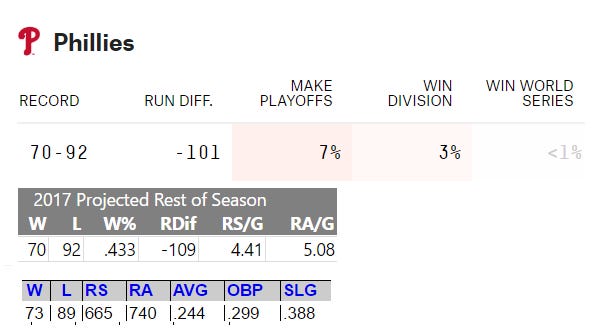 So the nerds at FiveThirtyEight, Fangraphs and Baseball Prospectus have spoken. The “experts’ at all the other publications have said their piece. I’m definitely in that camp as well. Too many variables this season in regards to the roster, we can’t really place much stock in win/loss totals. And the fact that we can’t get on on base, our power numbers will struggle, and our starters can’t get into the 6th inning, doesn’t help with those predictions either. To sum it up, this season will feel eerily similar to 2016.

Now the franchise goal for 2017 is to get to .500, which doesn’t really seem feasible if you look at the strength at the top of the division and the rest of the NL. The Mets are my World Series favorites and Dusty will manage the Nats to another first round defeat. Last season, the Phillies run differential was a laughable -189, which was the worst figure in baseball since 2010. Yet, they still managed to win 73 games. This season a projected number of around -100 really isn’t doing us any favors.

However, I think the Braves are in for a world of hurt given the miles on most of their 25 man roster and the tragic passing of Jose Fernandez unfortunately set the Marlins back for the forseeable fututre. Now the Marlins offense will be deadly this year and the bullpen will miss a lot of bats, but I think they have too many questions marks in the starting rotation. The Phillies were 30-46 against the NL East last season. If the weaknesses of the Braves and Marlins are exposed, the Phillies can gain 5-7 wins on that total and manage to land themselves in 3rd place and that coveted .500 record.

Jeremy Hellickson – 5-pitch arsenal which includes an above average curve and change. He throws strikes, stays healthy and is starting his 2nd consecutive opening day. A contending team will be lucky to have him at the Deadline.

Jared Eickhoff- He’s our horse. A throw in (according to some) in the Cole Hamels deal, has put up somewhat identical numbers to Hamels since the trade in terms of IP, ERA and WHIP. Gave up 30HR last season and Lefties smoked him.

Vince Velasquez – Saw the 7th inning just 4 times in 24 starts. Overthrows early in the game and his pitch count and stamina begin to suffer by the 5th inning (7.65 ERA in the 5th inning in 2016). Averaged 10.4 SO/9 and pitched great at hitter friendly, Citizens Bank Park with a 2.88 ERA.

Aaron Nola- He says his elbow is healthy. His spring training velocity numbers support that claim. But he is coming off a horrible spring and confidence in him is at an all time low. Prove us wrong. 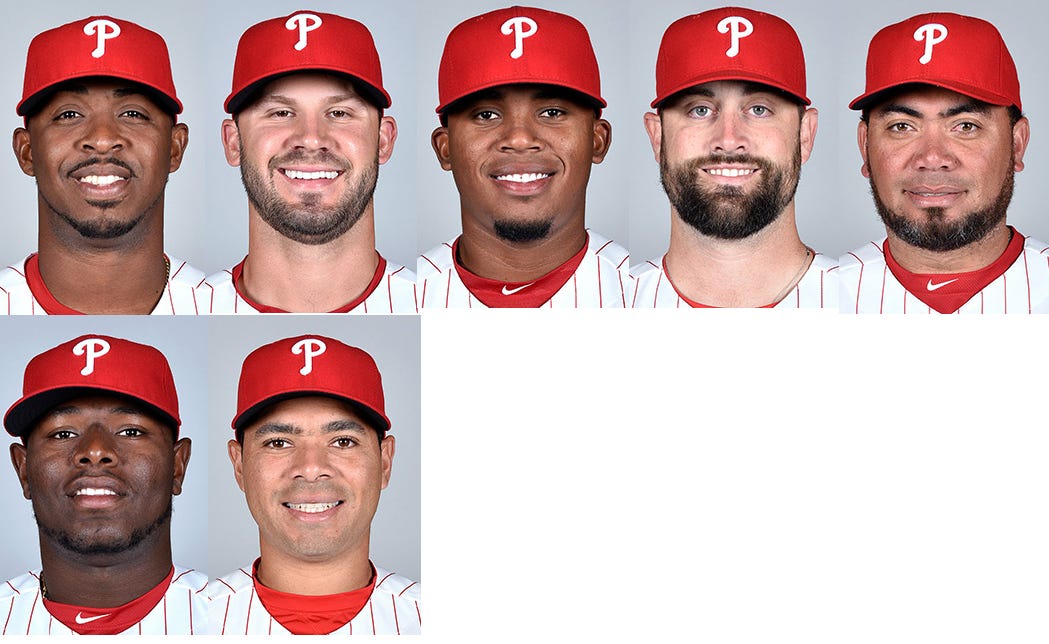 The Phillies bullpen struggled mightily in the second half last season. So let’s welcome this new cast of characters who can perhaps change that misfortune. Joely Rodriguez throws gas from the left side. A 95-97mph sinker with a wipeout slider. We saw plenty of Adam Morgan last season, but he earned this bullpen role after a solid spring. He’ll be used mostly as a lefty specialist. LHB hit just .257 against him last season. Righties smoked him. Edrubay Ramos throws cheese, tops at around 99mph. He averaged 9 SO/9 last season. Threw 80 combined innings last year in AAA and MLB. Expect that this season and maybe a chance at the closer role should Gomez struggle. Neshek and Benoit were great additions. They will each share the 6th and 7th inning, but can be used in every situation. Hector Neris developed a slider over the offseason giving hitters now a .33% chance to guess what he’s throwing. Batters figured him out towards the end of last season, but his devastating splitter/fastball combo still netted him 11.5 SO/9.
Jeanmar Gomez had 37 saves last season. Yes, he got hammered in September, but he still knows how to perform in the 9th. 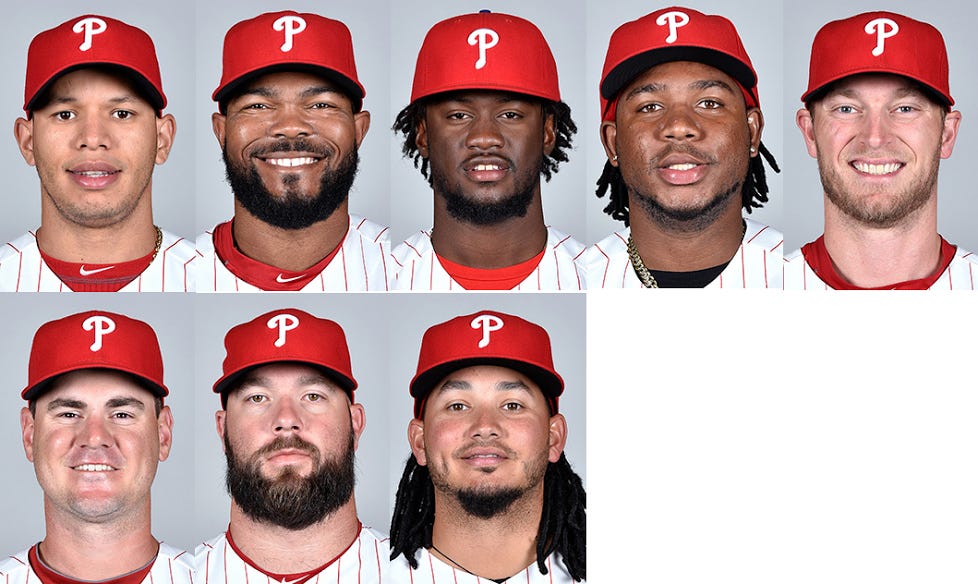 Cesar Hernandez – .371 OBP last season. Caught stealing 13 times in 30 opportunities. “You can’t have your base and steal it to.”

Howie Kendrick – Didn’t have a clear role in LA last season and it affected him at the plate. The Phillies .684 OPS in the the 2-hole last year was 3rd worst in the MLB last season. Kendrick’s career .289/.332/.417 slash line will be a vast improvement.

Odubel Herrera – Pete Mackanin says that he thinks Odubel can win a batting title. If Odubel remembers to show the same plate discipline he did in the first half (44BB), I believe him yo.

Maikel Franco – Hit .175 last season when he had 2-strikes. Needs to figure out how to hit righties and stop trying to pull everything. Let’s hope the Sophomore slump last season was just that.

Michael Saunders – Will hit for power against Right handed pitching, something the Phillies desperately need.

Tommy Joseph – Averaged a home run every 15 at bats last season. Ryan Howard is out, 1B is his and 35 HR is a real possibility.

Cameron Rupp – A place holder for Jorge Alfaro. The ball flys off Rupp’s bat when he makes contact, but he is a liability behind the plate. Catchers ERA of 4.76, 4th worst in MLB last season.

Freddy Galvis – According to fangraphs, the Clutch stat measures on a 2- (-2) scale a players ability to perform in high leverage situations. 2 being excellent, -2 being awful. His 1.92 rating was 2nd in all of the MLB last year. On top of that he was robbed of the gold glove last season.

Bench Player Mackanin Will Have a Hard Time Keeping On The Bench: Aaron Altherr
He did not perform as we hoped in 2016 after coming off a wrist injury late in the season. But, he he as healthy as can be now. The dude can mash, he can run, and can play every outfield position. Check out this 627 ft home run last week. Kendrick you are on the hot seat. 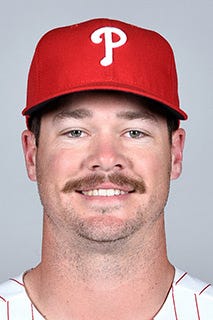 My Outside The Box Prediction:

The Phillies are head over heels in love with Freddy Galvis. He’s growing on me as well. Despite his putrid OBP last season, he really is a special player if you watch him closely. He plays gold glove defense, has sneaky power and his ability to perform in the clutch is tops in the MLB. But, he will be a free agent after the 2018 season.

All eyes are on JP Crawford this year. He is entering his 5th season in the minors and after a disappointing showing in AAA last season, this is a HUGE year for him. Although, he is just 22, I think the trade rumors will start to come full circle if he doesn’t perform at the level he is expected to this season. With Scott Kingery and Jesmuel Valentin knocking on the door and with Cesar Hernandez having 3 arbitration years left, Matty Klentak might have himself a little dilemma on his hands.