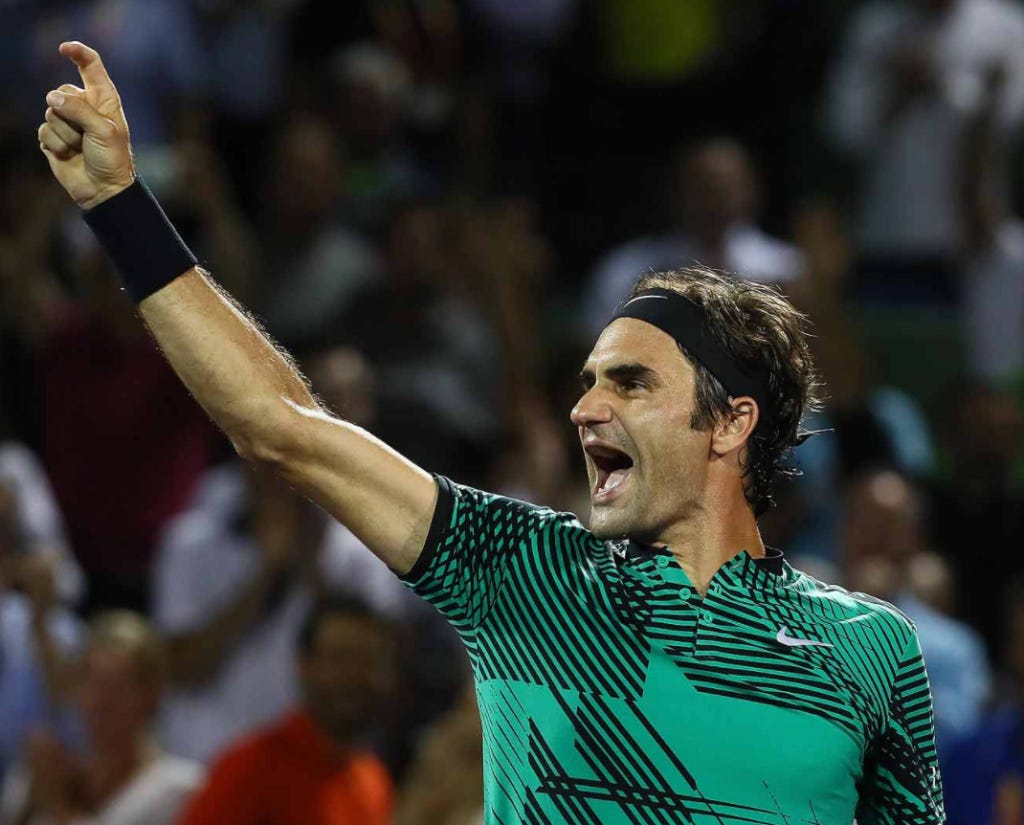 We need to talk about Roger Federer. What he’s doing at the age of 35 simply is illogical. I watched him lose in the 2015 US Open Finals to Djokovic and left with the defeated mindset he would never be able to win again. He didn’t have the winning mentality anymore. The killer instinct in him shrunk when it came to beating Novak or Andy. To kick off the 2016 season Fed made the Aussie Open semis only to fall once again to Djokovic. It felt like it was a lost cause with a sense of hopelessness whenever he stepped on the same court as the Serbian. He underwent arthroscopic knee surgery to repair a torn meniscus which sidelined him a few months. He went on to miss the French, his first withdraw from a tournament since 200, but managed to regain his health in time for Wimbledon. He was defeated in semis by Raonic in a match where he took an actual fall.

Soon after he would announce he was sitting out the remainder of the 2016 season, which included the Olympics as well as the US Open. Tennis felt… weird. The king of tennis was seemingly fading away from us and becoming a ghost. We know when an athlete gets older their body breaks down quicker and injuries become more frequent than in the past, but this was unfair. Oh, but he wasn’t done.

Rog decided to grab 2017 by the horns and make it his bitch. He finally won his elusive 18th major championship at the Aussie Open in a statement to everyone that he wasn’t going anywhere. But was it a blip on the map? And if it was we’d have no problem at all seeing Federer ride off into the sunset with #18 in hand. I mean the dude is 35 years old, there’s not much more we can expect him to give us right? Wrong. Dead wrong. Federer it appears has set out to regain his status as the best player in the world. Not all time because that’s already set in stone, but he wants to be the best player in the world at this very second despite being much older than anyone on the tour.

Fed decided to play in both Indian Wells and Miami in consecutive tournaments, otherwise known as the Sunshine Double. He ran through Indian Wells, dispatching players like Nadal, Jack Sock, and longtime friend Stan Wawrinka all in straight sets on his way to another Masters 1000 title.

Next up was Miami where it wasn’t realistic to expect a deep run, considering having no break at all between tournaments. Wrong again. After getting by Tomas Berdych in a tough three set match in the quarters, Roger ran into the Australian phenom Nick Kyrgios. These two were set to play in California the previous week in the quarters, but Nick withdrew due to sickness. Whether he was actually sick remains to be seen, but he was ready to play in Miami. This match was one of the best three setters I’ve ever watched in my life. Now I’m young, so excuse me if there are some classic McEnroe Jimmy Connors duels I’m forgetting, but this match was exhilarating for three full hours. I couldn’t take my eyes off the screen. Back and forth they went just absolutely smashing forehand after forehand. When Nick has his head on straight and can keep his focus he produces some of the best tennis on the tour, and against Roger on the big stage he rose to the occasion. Do yourself a favor and go to the bathroom today and just watch this ten minute highlight of their match. It’s incredible.

A fan yelling out during the 3rd set tiebreak did not sit well with Kyrgios late in tiebreak, as it shouldn’t have, and led to a mini-meltdown.

Nick’s aggressive second serve during the final tiebreak doomed him with a killer double fault, allowing Roger to close out the match on his serve.

With a day’s rest in his pocket Fed met Nadal once again in final, and for the fourth time in a row now, he came out victorious. In consecutive tournaments he’s dispatched his longtime rival, and great friend, in fairly easy fashion. Here’s Rog after the match reflecting on his journey to get back to this point.

So we turn the page to April, three months into the season and Federer has three titles. How is this possible? He’s getting better. A little over a year ago this wasn’t possible. Would Federer win another Grand Slam before Tiger won a major became a real question. Playing 11 matches in 21 days was a pipe dream because of his injury troubles. Now his eyes are set on Wimbledon and reclaiming that #1 ranking. Agassi holds the record of being the oldest #1 in the world when back in 2003 he reached that summit at the age of 33.

So now Roger will take a very well deserved break as we head into clay court season. He said he’ll probably only play in the French Open which is totally understandable, and extremely smart. Nadal is still playing exceptional tennis himself, he’s just running the buzzsaw that is the Swiss Maestro. He’ll run through the clay court season and regain his winning confidence heading into Roland Garros where Roger will hopefully be waiting at some point.

ESPN’s Brad Gilbert made a lofty prediction for who will finish the season #1, “Right now Fed’s got a better than 50 percent chance of finishing the year No. 1. When you look at how far Djoker and Murray are behind, I think it’s going to come down to Roger and Rafa.” One can dream…