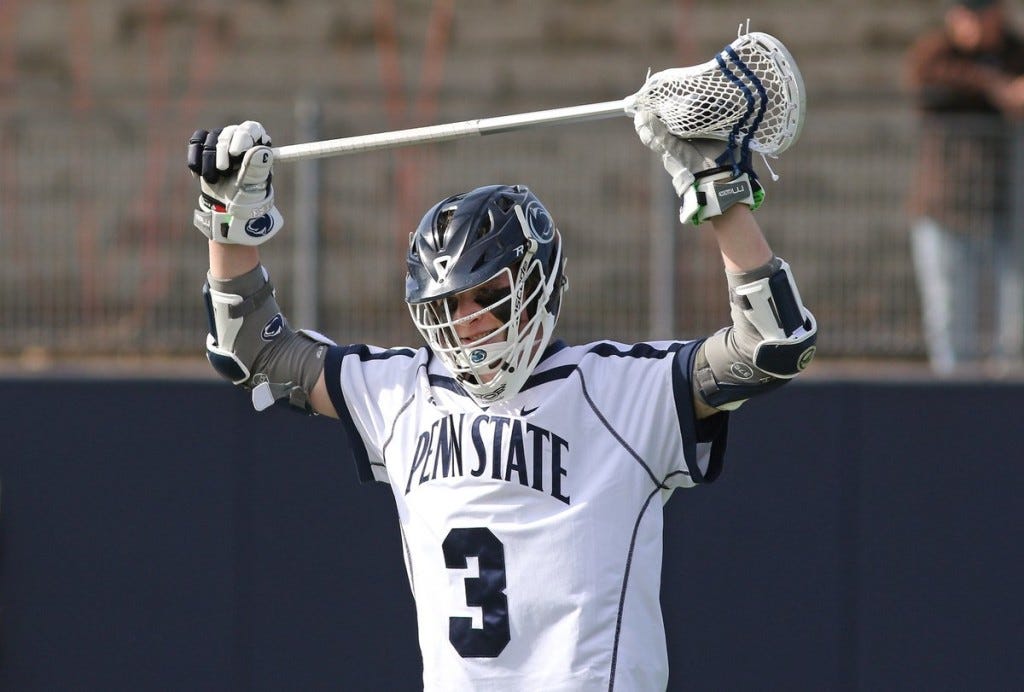 Another week down and another week where we have a new team sitting at #1 in the polls. While Penn State is still undefeated, Notre Dame’s win over Ohio State was enough to get them back to the top spot and I think this Ryder Garnsey goal alone was enough to justify the jump over PSU.

I mean, what do you even do if you’re the defenseman in this situation? You don’t give up top side. You keep him underneath. He hits what looks like an inverted question mark dodge before the step back to free up his strong hand, low-to-high rip and it’s in the back of the net. Again, if you’re the defender in this situation you’re just is to just make sure you don’t give him his left. But Garnsey is so fucking shifty that even if you sit upfield on him he’s still going to get his left free.

I said it last week and I’ll say it again. Ohio State is a team that matches up perfectly against Denver. It’s the reason why they destroyed them 2 weeks ago. Defensively they were able to win the 1v1 battles and never had to slide much which gave Denver’s offense nothing to work with. But Notre Dame’s offense is just much more dynamic and multi-dimensional than Denver’s. They have guys like Ryder Garnsey who can put their defenders through a spin cycle. They have guys like Sergio Perkovic who can bomb from range and put up 3 against the Buckeyes. Ohio State’s win over Denver wasn’t a fluke. It was just much better match up for them than Notre Dame is. So now ND has wins over Maryland, Virginia, Ohio State and a 1-goal loss to Denver as their only blemish. That’s a better resume than Penn State’s 9-0 and they are deserving of that 1 spot in the rankings. Here’s how the rest of the Top 20 looks heading into the weekend. 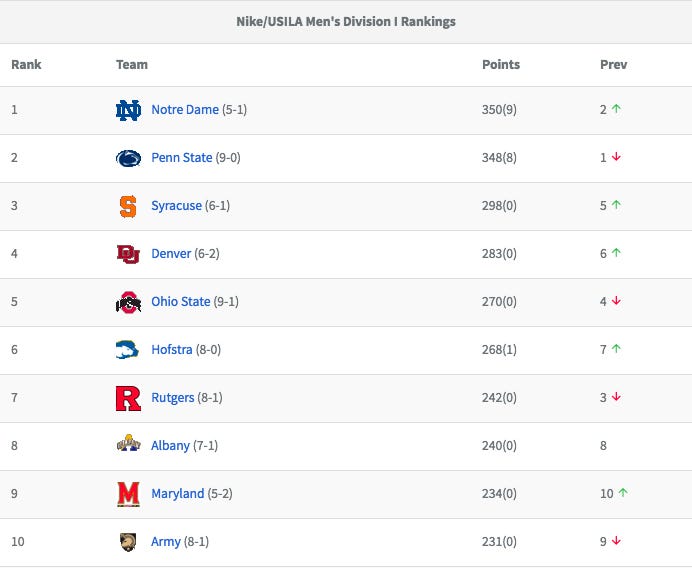 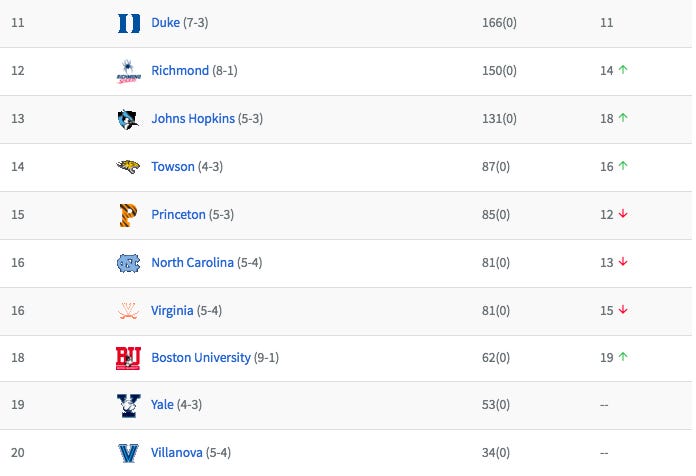 The Rutgers loss was a bad one. Going down 13-9 against unranked Delaware while the Media Poll had them at #1. Like I said last week, I’m just not sold on Rutgers being the best team in the nation let alone the best team in the B1G. Yes, a win over Army is big and a win over Princeton is good. But the Army win was early in the season and the Princeton win was a toss up because it was played in Siberian weather. I think it’s great that Rutgers is becoming a legitimate lacrosse school and think their success is huge for the game. But the Media Poll having them at #1 last week was laughable. They drop down to #7 and I think that’s exactly where they belong. They’re not elite offensively, they’re not elite defensively. They’re very good and top 20 on both ends of the field but they don’t have a single aspect of their game that they have a clear advantage in over any other team.

Unlike Albany, who I am sorry if I talk about too much but people need to start respecting the Danes. Because what they have is an offense that will score a million goals per game and a faceoff guy in TD Ierlan who will win a million draws per game. I’m echoing myself from last week but a highly efficient offense plus a highly efficient faceoff game is the #1 recipe to win games. You look at what they did against Harvard on Wednesday. A 15-13 win. That’s not a great game defensively. They got a bunch of big time saves by JD Colarusso in net but the defense as a whole was sloppy. But they have Connor Fields, who leads the nation in points with 55 (scoring damn near 7 points per game), quarterbacking the offense. And then TD Ierlan who went 26/32 in the faceoff X. So even if your team isn’t too hot defensively, scoring 16.9 goals per game and winning 75% of your faceoffs make up for that. They don’t have a top 20 win yet but that’ll come after the Maryland game on the 12th.

Not a ton of movement otherwise in the rankings aside from Cardiac Cuse jumping up 3 spots after ANOTHER 1-goal win. This time against Duke in OT.

The last 6 games for Syracuse have been a 10-9 win over Albany, a 14-13 loss to Army, a 14-13 win over Virginia, a 9-8 win over St. John’s, an 8-7 OT win over Hopkins and this 12-11 OT win against Duke. 6 straight 1-goal games and they’ve only lost 1 of them. While finding yourself in those situations time after time isn’t exactly the best game plan, being a team who regularly manages to pull out a win in those close ones shows me that the Syracuse Orange are a tournament ready team. We’ll see just how ready they are this weekend, however, when they head to South Bend.

Biggest game of the weekend right here. No team has gone more than a week as the #1 team in the country for the past 4 weeks. Can Notre Dame bring a little stability to the rankings or will Syracuse squeak out another 1-goal win to keep the crazy streak alive in college lacrosse. What’s working the best in Notre Dame’s favor is they have one of the best defenses in the nation. LSM John Sexton and pole Garrett Epple were both just named midseason First Team All Americans. D-mid Drew Schantz (Philly what up) was named to the midseason Second Team. And it’s not like Syracuse has a lethal offense. They just have a few guys on that team who come up clutch in clutch moments like Sergio Salcido. Notre Dame is holding teams to under 8 goals per game. It’s in South Bend. And the hockey team made it to the Frozen Four as a 4-seed so the Luck of the Irish is alive and well. Give me Notre Dame coming out on top and just for fun, let’s say Syracuse covers to keep the 1-goal games going.

There are still plenty of Penn State doubters out there. Even though they’re 9-0, they don’t have the strongest resume out there. They beat Villanova, who is now in the top 20, 17-12 but Villanova was 0-3 after that loss. They beat Penn 14-13 while Penn was a top 20 team but they’ve fallen off since which takes some of the strength out of that win. They got past a trap game against Fairfield and played Cleveland State last week. They went 9-0 in their out of conference schedule but now it’s finally B1G season. Ohio State looked great against Denver but we already talked about how much they struggled against Notre Dame. Personally, I like the combination of Penn State scoring 15 goals per game and going 70% in the faceoff X to give the Nittany Lions the advantage here. Plus it’s in Happy Valley. Ohio State only gives up about 7 goals per game right now but as long as Penn State can turn this game into a make-it-take-it situation, that defense is going to get a dent put into it. The X-factor in this one is how well Penn State is able to get Mac O’Keefe open against this Buckeye defense. The freshman leads the nation with 34 goals but he’s more of a finisher than a creator. He could run into the same issue that Denver did but I can see the kid popping off on the big stage.

O’Keefe will be spending his summer playing Jr. A box up in Canada with the Orangeville Northmen. Which is huge in terms of Americans starting to close the gap with Canadians in the box game. With NLL expansion rolling out in the next few years and the box game starting to pick back up here in the US, it’s a pretty big deal to send our best guys up to Canada to get this experience in junior.

Just want to give a quick shoutout here to the Richmond Spiders. They were a club team just a few years ago and this year they’ve been a top 20 program since the start of the season. Every week so far they’ve been in the rankings and their only loss on the year was a 9-8 loss to Duke. Tomorrow is their 3rd and final ACC game of the season. They had that 1-goal loss to Duke. They had a 6-5 win over North Carolina. And now they get Virginia tomorrow. They’re one of the newer programs in D1 lacrosse and they’re right up there with the best conference in the game. Their defense is only letting up 5.4 goals per game right now and a lot of that has to do with Benny Pugh being the best goalie in the nation. He leads the nation with a 0.698 save percentage and was just named a midseason First Team All American. This is a huge year for the Spiders and Virginia has been way too inconsistent for me to give them the edge over a hungry Richmond team. So give me the Richmond D shutting down Virginia and knocking them out of the top 20.

I know I spent a ton of time bashing Rutgers earlier but I think they get this one. I just think this Johns Hopkins team isn’t dominant enough to come off a huge 18-17 overtime victory and follow it up with another win to start off conference play. Meanwhile, Rutgers got embarrassed by Delaware and are in some serious need of a bounce back. Now I could be wrong. Maybe Delaware killed Rutgers, exposed some serious flaws in that team and Johns Hopkins can smell the blood in the water. But they smoked Hopkins 16-9 to start B1G play last year and I think they do it again this year. Maybe not a 7-goal win since they have to travel to Homewood on a Friday. But definitely a win.

All 4 of North Carolina’s losses this year have come against top 20 teams so it’s understandable how a 5-4 UNC team is still in the top 20. But they’re just not the same team from last year. All 4 losses have been at home too. So there’s no advantage there for the Tar Heels. Give me Danowski and the Blue Devils continue to climb back up the rankings.

So it was a rough week for my picks on the blog last week. I had Loyola -3 over Bucknell and they lost in overtime. I had Ohio State covering +2 against Notre Dame and they got throttled 12-7. Hopkins covered their +1.5 over Virginia and won outright in overtime, and Albany covered their -5.5 over UMass-Lowell, beating them by 10. So 2-2. Good, not great. However, I hopped on Lax Sports Net last Friday to do a prediction show with them and casually went 6-0 with my picks.

So yeah, not a big deal or anything. So anyway, let’s try to keep the hot hand rolling with this week’s picks…