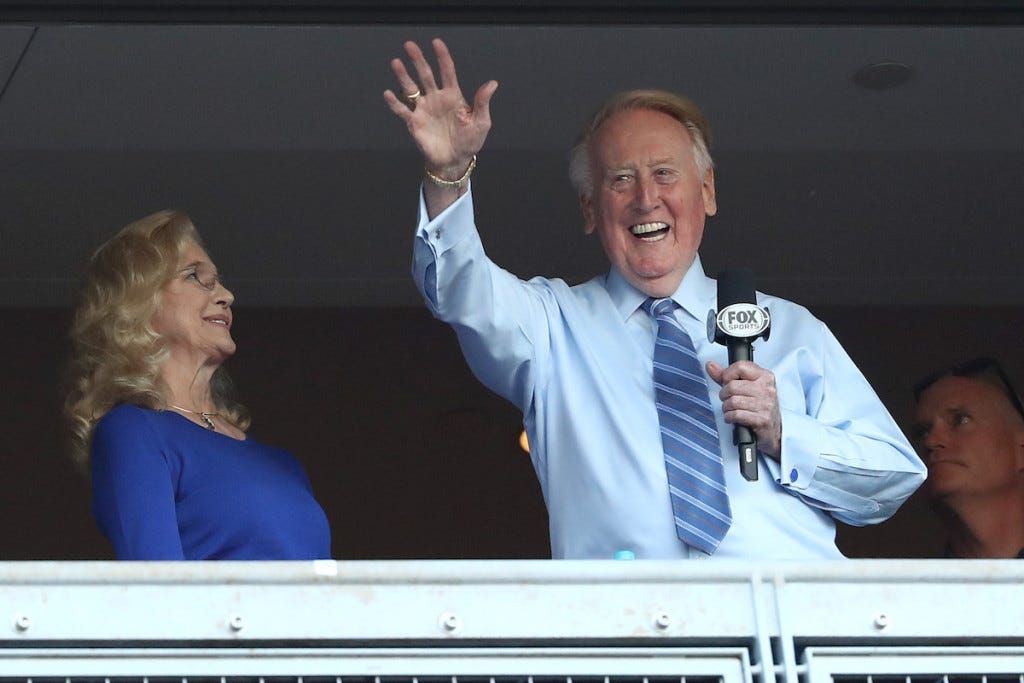 “It’s a day game. I’ll probably have things to do,” the famed 89-year-old announcer told The Associated Press from his home in Hidden Hills, California. “I might catch a piece of it.”

“During the World Series back around ’77 or ’78, there was a game at Dodger Stadium with the Yankees, and I went to the game as a spectator. Now, I hadn’t been as a spectator in a long, long time, and I felt somewhat restless that I wasn’t broadcasting,” Scully recalled Tuesday.

“I did not have the challenge of trying to describe, accurately and quickly, the way it should be done. I just sat there, and I was not happy, I’ll be honest. So I realized that although I love the game, what I loved more was broadcasting it,” he said.

I gotta be honest with ya; I’m not even a Dodgers fan and this rubbed me the wrong way. You could look at this one of two ways — you could cut the guy some slack, and say hey, he’s fucking 89 years old. He’s been calling Dodger games for 66 years. Let him do whatever he wants with the rest of his days. I know that sounds morbid, but let’s call a spade a spade here. He’s really old, and he’s dedicated a majority of his life to baseball. Maybe he wants to dedicate the rest of his time to other aspects of his life. Who could ever have a problem with that?

I think what rubbed me the wrong way was how he sounded so apathetic towards Opening Day. You “probably” have plans? You’re counting out even watching Opening Day on the off-chance that you might have something else to do? I mean, this is like a national holiday to baseball fans. Vin Scully is a big piece of the fabric that has been woven into baseball history. And to hear him be like, meh, Opening Day? I’m not going or watching because I’ll probably be doing stuff.

It’s like a little kid hopping off Santa’s lap at the mall, and then a half hour later seeing the old man who’s playing Santa on his lunch break, ripping cigarettes and sucking down nips outside of Macy’s with his fake beard hanging off. As a kid, you never expect to see that, and as a baseball fan, you never expect to hear Vin Scully sound so apathetic towards the start of a new baseball season. I feel empty now.

PS — What could an 89-year-old man possibly have to do at 1:10 PM on a Monday besides sit in their favorite chair and watch baseball on TV? That’s what 89-year-old guys do. I’m just lashing out now. I’m sorry. Santa’s still real to me damnit.