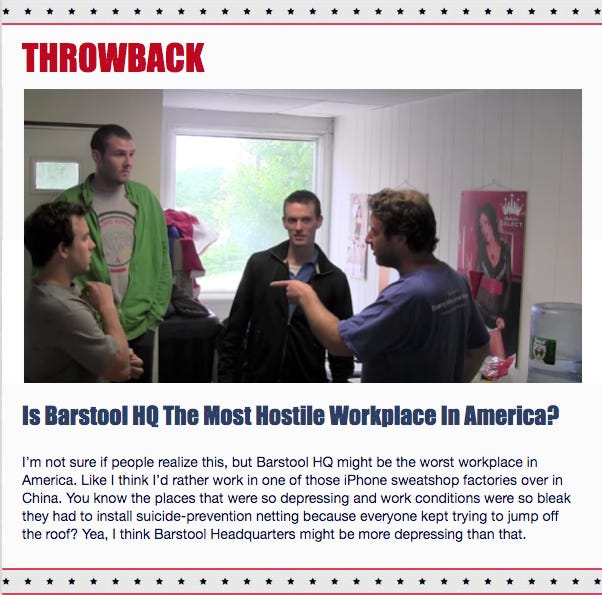 New throwback, every day, 5 days a week on the Barstool newsletter…

I’m not sure if people realize this, but Barstool HQ might be the worst workplace in America. Like I think I’d rather work in one of those iPhone sweatshop factories over in China. You know the places that were so depressing and work conditions were so bleak they had to install suicide-prevention netting because everyone kept trying to jump off the roof? Yea, I think Barstool Headquarters might be more depressing than that.

I think some people have this misconception like its Rob Dyrdek’s fantasy factory or some shit. Like the guys all just play air hockey and pop a shot and have fun all day. Like a frat house or something. For sure not. Its one of the most depressing, bleak places I’ve ever been. You walk in that office on any given day and you’ll see just as many depressed faces there as you will in any cube anywhere across corporate America. Just like any organization it starts from the top. Portnoy has his own office upstairs, separate from the rest of the employees. He blogs from up in his ivory tower and beneath him is literally a bunch of starving minions. Guys like Hank and Milmore like Oliver Twist trying to steal bread and shit. Then you got the rest of the guys – the veterans of the Stool. Dudes like Sales Guy and Feitelberg and now Louis and Delo and company. All good guys. All pretty friendly. And for some reason they all just sit there in complete and total silence staring at their computers. Surrounded by filth and squalor and tobacco spit – nobody saying a word to each other. You’d think they were all in a cancer ward getting chemo or something. Its unbelievably depressing. Like thats the sort of setting I was used to in the Cubes. People just miserable as the life slowly drains from their soul trying to avoid all interaction with any coworkers. But thats why I became a fucking blogger. Get away from that misery, man. One time I spent a whole work day there and I was chatting it up with the guys and shit. Throwing around the mini football. I was asking Hank his entire life story because he’s an International Man of Mystery. Louis turned to me and said “Thank God you’re not here every day I didn’t get anything done.” I swear its like Portnoy is running an internment camp up there. Head down, eyes forward, and the beatings will continue until morale improves.