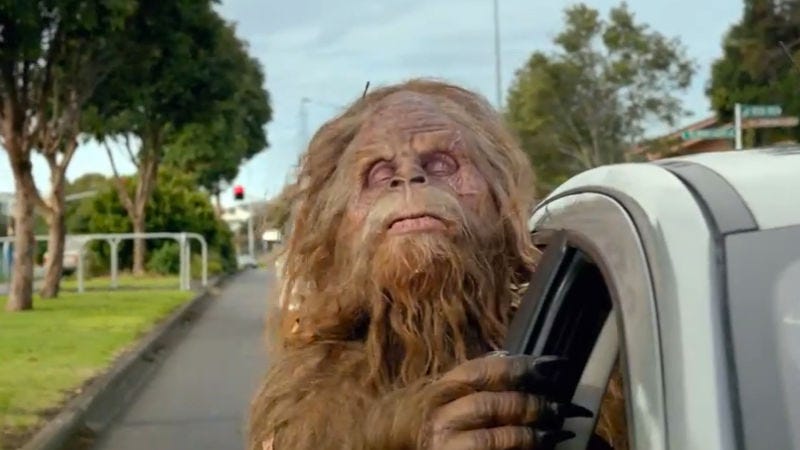 Yahoo- A northern Idaho woman told police she crashed into a deer because she was distracted by a sasquatch in her rearview mirror. The Moscow-Pullman Daily News reports (http://bit.ly/2n2zshf ) that the 50-year-old Tensed woman was driving south on U.S. Highway 95 on Wednesday when she struck a deer near Potlatch. The woman told Benewah County Sheriff’s officials that she saw a sasquatch chasing a deer on the side of the road while driving. She says she checked one of her mirrors to get a second look at the beast and when she looked up, the deer ran in front of her. Sheriff’s officials marked the incident as a vehicle versus deer collision but did not report any evidence of Bigfoot.

My real concern with this situation is not if the Sasquatch actually exists, but whether or not this woman is gonna get this accident covered by her insurance. How can you call yourself a self-respecting human if you can’t side with a woman who crashed her car on account of a Sasquatch? I know insurance agents are notoriously angry elves but c’mon. If guys like Sexy Rexy can get his stomach stapled in half on his insurance’s dime, this lady better be able to get a free repair on her auto insurance for seeing a Sasquatch sashay across the road behind her.

All you need to do is picture yourself driving down a dark road all by your lonesome at night. I’m gonna go out on a limb and assume there are 1 or 2 of those in the Land of Potatoes. You pan to left and see the ever-elusive Sasquatch. The Sasquatch, or Bigfoot, is the Ken Griffey Jr. of the cryptozoology game. There are other great ones- the Loch Ness Monster is maybe the Tom Seaver, the Mothman wishes he was the Nolan Ryan, but no one tops the Sasquatch. It is undeniably a first ballot Hall-of-Famer with the highest vote percentage in history. There is nothing else for you to do than stop and stare at that wiley beast, and if a car accident happens, it happens. It’s simply one of those things that comes with the territory of witnessing a rare cryptid, and nobody can blame the woman for it.