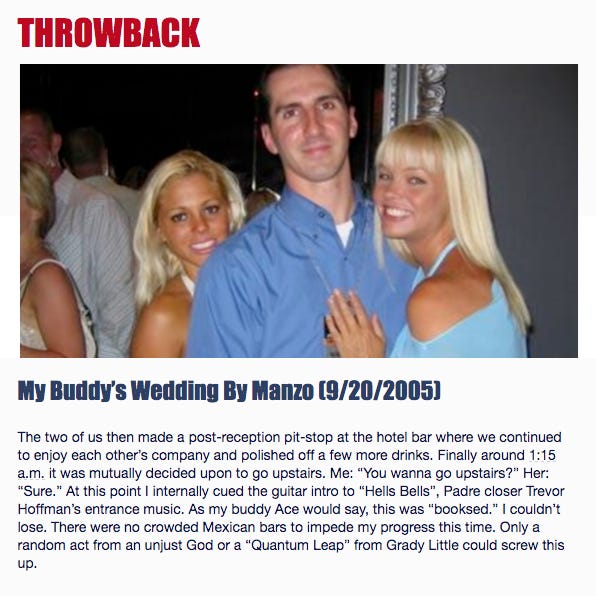 Warning: This story is intended for immature audiences only. There is no class, shame or redeeming quality anywhere. Proceed at your own risk.

So the Friday before the wedding, I was introduced to this brave soul while watching Oprah in the living room of the bride’s parents. “Pete, this is Nicole, you guys are walking together at the wedding and sharing the room Sunday night,” Heigel stated matter-of-factly. After shaking hands, the inevitable small talk ensued, and within a few minutes, surprisingly, some kind of “spark” was triggered during Oprah. Normally, I’d be brushed aside and the dreaded “B word” would rear its ugly head. But it did not – she was single, as was I. And I could’ve sworn she was flirting with me. VERY interesting. If you mentally fast forwarded to Sunday night like I did, you couldn’t help but envision a post-wedding celebration in the hotel room and hear the chorus of the Billy Idol classic “White Wedding” playing in your head. “….…..START AGAAAAINNN!!”

At the rehearsal dinner Saturday night, it was more of the same as we sat side by side and talked the entire meal. She mentioned how her dad used to be an NBA ref and instinctually I questioned if he ever called a travel on Patrick Ewing’s drop-step. Shortly after the main course was cleared I was presented with a pair of red, white and blue USA boxers as my wedding-party gift. Yes, like the ones Apollo gave Rocky before Balboa/Lang II. (“Prediction?…PAIN.”) After a few more drinks, we exchanged “See you tomorrow’s” and parted ways for the night. Honestly, I’m not sure Bill Walsh could’ve scripted a better start than this. Everything was set up perfectly for tomorrow night.

During the post-wedding reception the following day, as planned, Nicole and I trotted out together to Usher’s “Yeah-Yeah” song and “raised the roof” with our free arm. The open bar was serving its purpose and more chit-chat transpired during dinner where I managed to inhale 2 full portions of the Filet mignon. After dessert I put on a complimentary pair of Blues Brothers’ sunglasses and danced the night away “Swayze-style”. The two of us then made a post-reception pit-stop at the hotel bar where we continued to enjoy each other’s company and polished off a few more drinks. Finally around 1:15 a.m. it was mutually decided upon to go upstairs. Me: “You wanna go upstairs?” Her: “Sure.” At this point I internally cued the guitar intro to “Hells Bells”, Padre closer Trevor Hoffman’s entrance music. As my buddy Ace would say, this was “booksed.” I couldn’t lose. There were no crowded Mexican bars to impede my progress this time. Only a random act from an unjust God or a “Quantum Leap” from Grady Little could screw this up.

As we entered the room, alone, she dropped her stuff down in the back corner and began disassembling her hair clips. I turned on ESPN to hear Stuart Scott “Boo-yeah!” his way through Wimbledon highlights and scooted over to the closet area where I quickly changed into something “more comfortable”, which was a Molson Ice t-shirt circa 1997 and of course, the USA boxers. “Do you mind if I get in your bed in the middle of the night?” she politely asked as I jumped into bed #1. “Ah, nope.” But at that moment, after we finalized the logistics, I felt a rumbling. Uh-oh. It was a rumbling unfortunately for me I hadn’t felt in 2 days. Rumble, rumble. It seemed that everything I had digested over the weekend began doing “the chicken dance” in my stomach: the lasagna at the rehearsal dinner, the 2 filets at the wedding, several of those mini-hot dogs, cheap Scotch from the limo, thick chocolate cake, 25 Coors Lights, a random “Liquid cocaine” shot – everything. I remained calm, and hoped the feeling would subside but it did not. Rumble, rumble, rumble. Decision time. I knew the consequences of my next course of action would jeopardize the remainder of the evening but I had no choice other than to follow nature’s poorly timed shout. So I bolted from the bed into the unsuspecting bathroom, turned on the sink to mask the sound, sat down and what happened next I can only describe as an absolute disaster. Let’s just say we finally found the WMD’s, I’ll leave it at that.

After 10 minutes, 3 flushes and 2 Hail Mary’s, I gingerly exited the crime scene only to see Nicole, who was getting ready to enter herself! Yikes!

She refused to heed my command and entered despite my noble pleas. (Who says chivalry is dead?) In less than a second, as I suspected, she did a “180” and darted out with her hand covering her mouth and eyes watering like she just saw a dead body. “Aw, God! What did you do?! Why is there no fan in there?! That is AWFUL.” True. The stench was so bad the channels started flipping by themselves on TV. “I told you not to go in there.” Clearly she was dazed, temporarily unable to breathe, and lied down impatiently on bed #2. Following 30 seconds of awkward silence…“How could they not have a fan?!” again she asked rhetorically. Ugh. I buried my head in the pillows on bed #1 and failed to respond as tumbleweed passed through the room. By the time she was through in the bathroom after Federal Agents deemed it “safe for entry” 20 minutes later, I was passed out.

I woke up the next morning at 11 and Nicole was gone. She left early to drive the newlyweds to the airport. A few hours later I boarded a Bridgeport bound ferry across Long Island Sound where I was at the mercy of a sarcastic sea captain, 2 little kids with squirt guns and a single, laissez-faire, Hippie mom. I passed on the Ferry dogs. You didn’t expect a happy ending did you? Until next time, you stay classy Boston.

SIGN UP FOR THE NEWSLETTER - new throwback, 5 days a week, every morning at 8:30 AM.