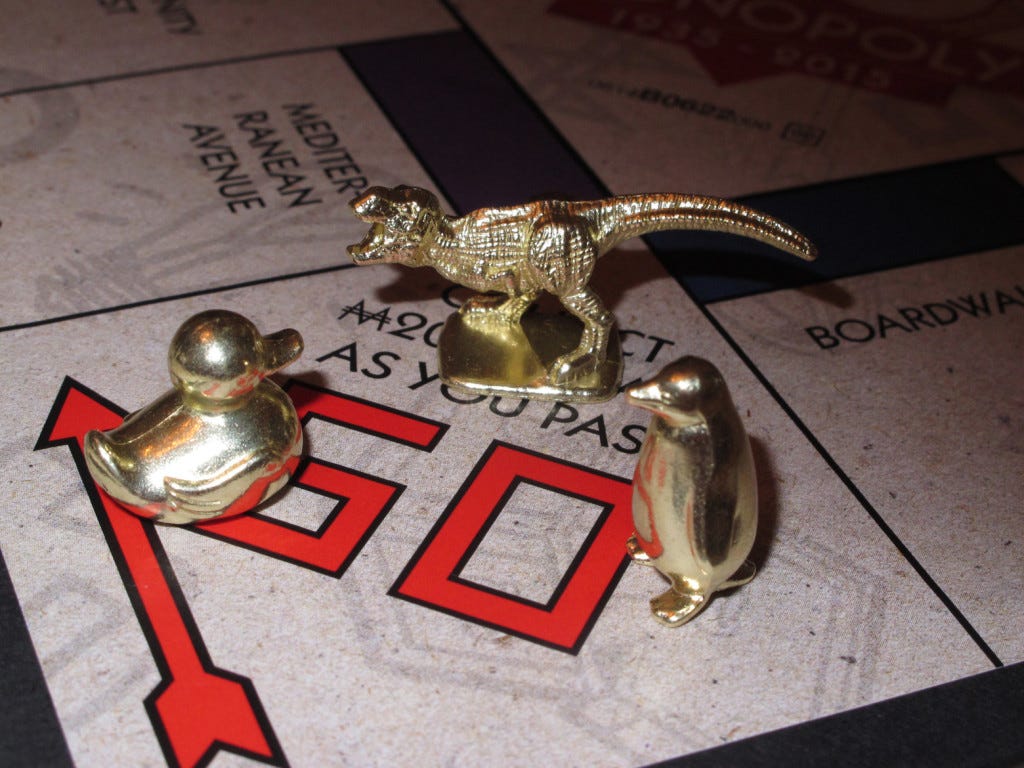 USA TODAY- Everyone has their favorite Monopoly token, but those who tend to reach for the wheelbarrow, thimble or boot token may have to pick a new favorite game-piece. The thimble, boot and wheelbarrow will be replaced by T-Rex, rubber ducky and penguin tokens this fall. The iconic game pieces met their fate after millions of fans voted on which eight tokens they’d like to see in the next version of the game during Monopoly Token Madness Vote in January, Hasbro said in a statement.

So, who made the cut? The Scottie dog, top hat, car, battleship, cat, T-Rex, rubber ducky, and penguin tokens, are the eight game pieces that will be featured in the next generation of the game.

Well they finally did it. After years of toeing the line and threatening to change it all up, those motherfuckers at Monopoly dumbed the game down for the 21st century. Forget that Monopoly is a thinking-man’s game of strategy based on the American Dream of swindling/bankrupting your opponents. Sure some of the terms are outdated. I’ve never known what the hell a community chest was. Free parking never made sense to me. And owning railroads or coming in 2nd in beauty contests has always actually a thing in the game. But that’s also the beauty of Monopoly. It’s dated but is a timeless classic. There sure as hell is no room for giant lizards, cute ass birds, or children’s toys in Monopoly. The cut-throat capitalism in Monopoly is the reason those penguins won’t have an iceberg to stand on in 20 years. That soft ass rubber ducky would be on the corner selling its body after 10 rolls of the dice in a game of Monopoly. And the dinosaur? An old ass extinct monster making the cut over a game board icon like the thimble is a fucking embarrassment to not only the Parker Brothers but the entire Parker family. There are no Gumdrop Passes or cute hungry hippos in Monopoly. It’s a game built on cold hard cash that you win by climbing on top of the corpses of your vanquished enemies like the Battle of the Bastards. And if you fuck around too much, your ass goes directly to jail. Don’t pass Go, don’t collect $200. Straight to the clink for a life of gruel, working out, and watching your ass in the shower. Or if you are lucky, you end up just visiting. You don’t have to worry about getting thrown in the paddy wagon while crossing the Gumdrop Pass in Candy Land though, which is where game pieces like these new ones belong. As for the boot and the wheelbarrow, they can both take a hike. Especially the boot. That’s some poor person Great Depression shit.

And yes, if you have ever heard the urban legend of a man named Clem that won a game of Monopoly by being the only person in the game with a monopoly, which happened to be Baltic and Mediterranean no less, that man was indeed me. It may have been as fun as watching paint dry, but Warren Buffett himself would have been impressed with my shrewd business sense that very, very, veryyyyy long day (since it is a lot more fun to talk about Monopoly than finish an entire game of Monopoly).