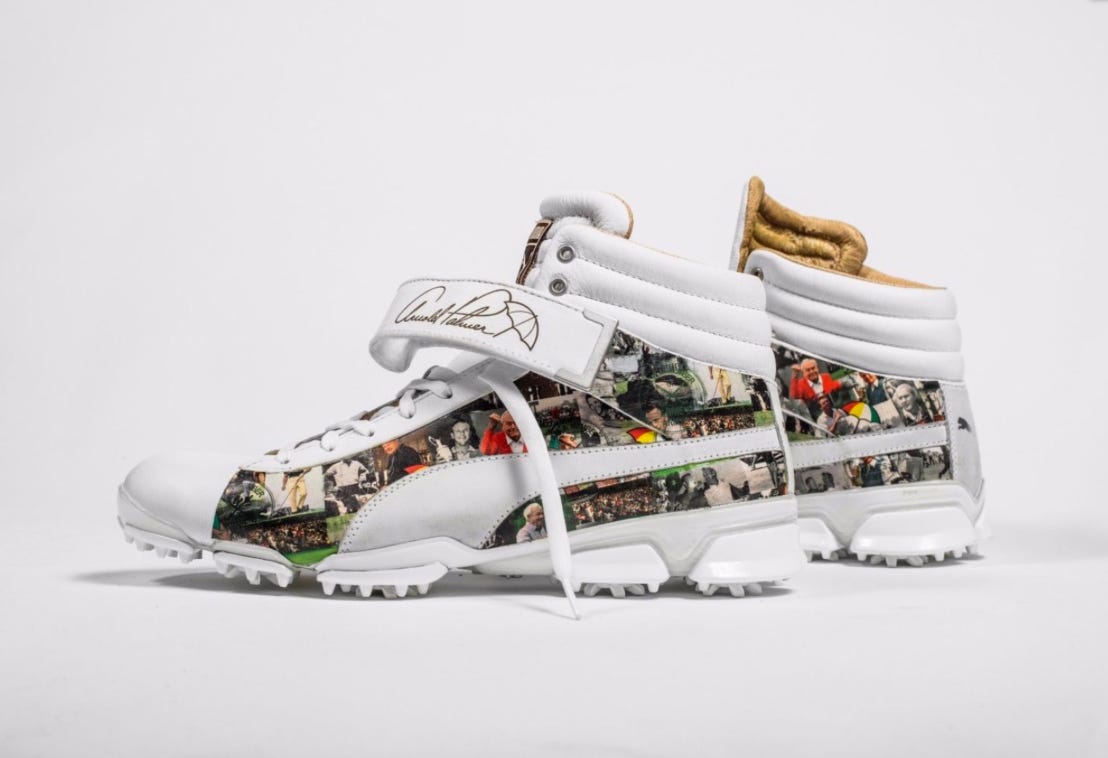 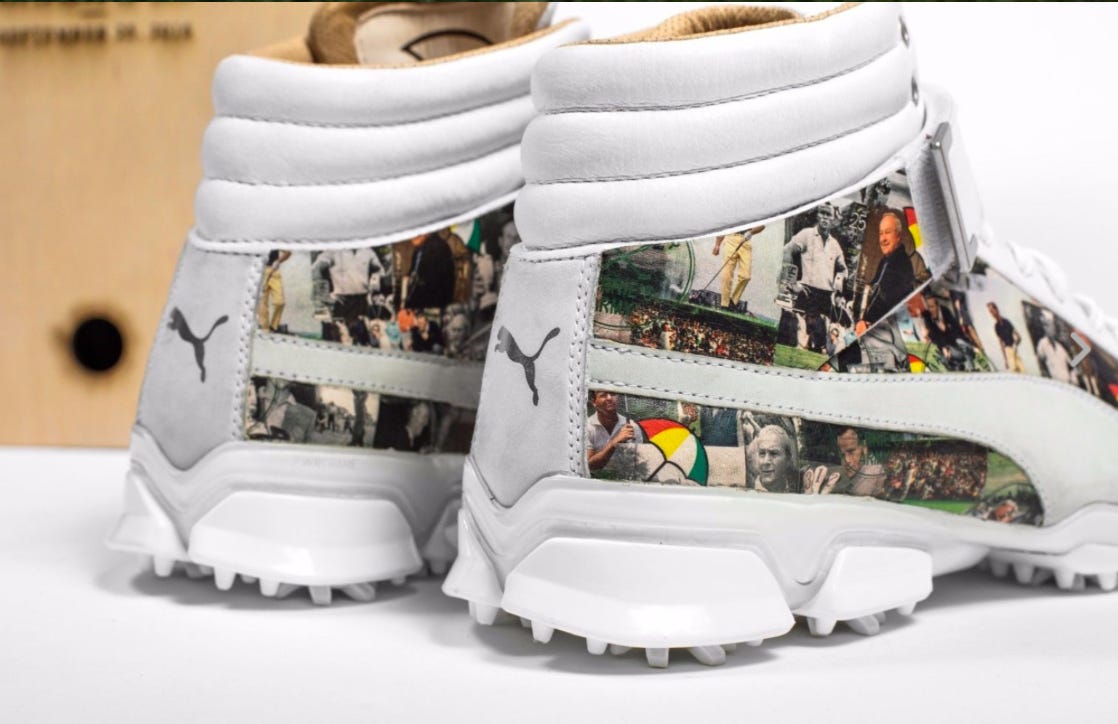 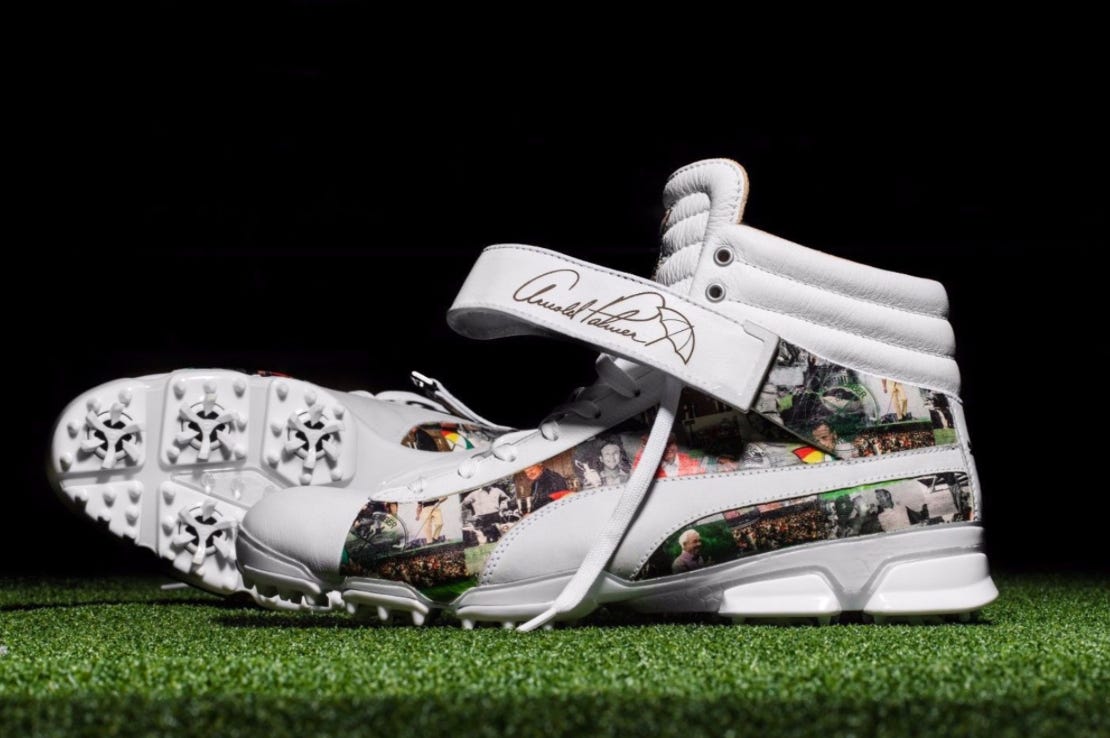 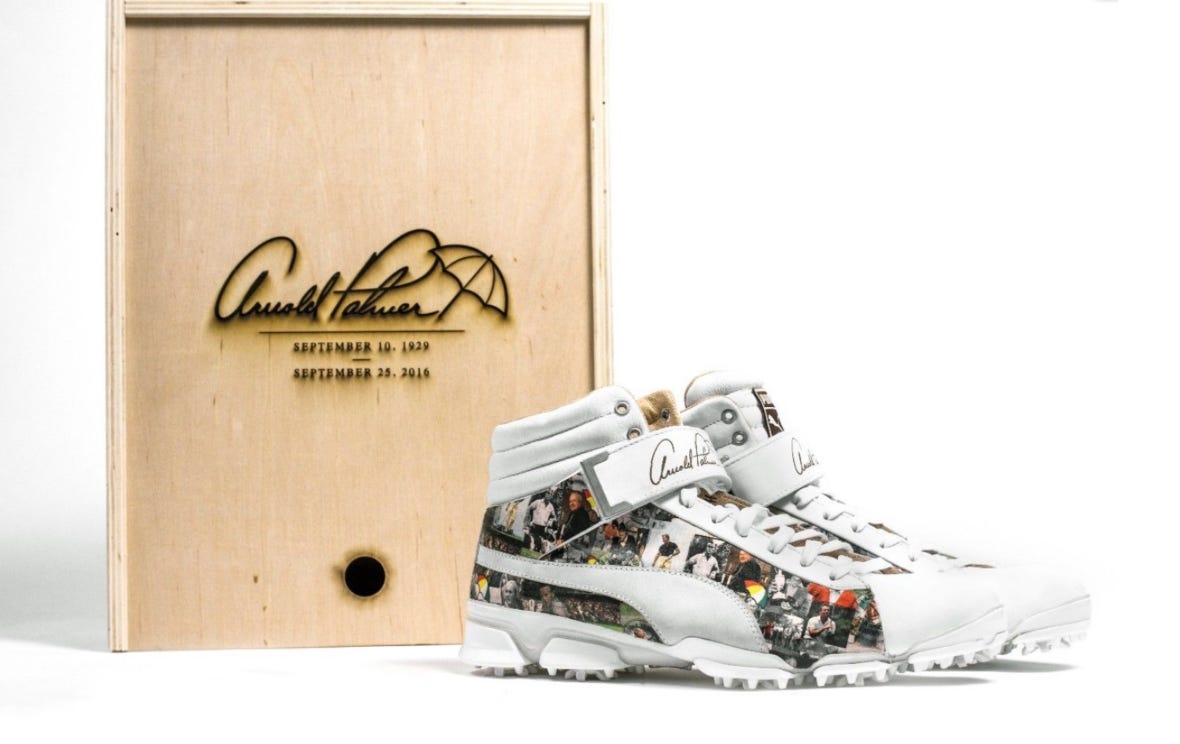 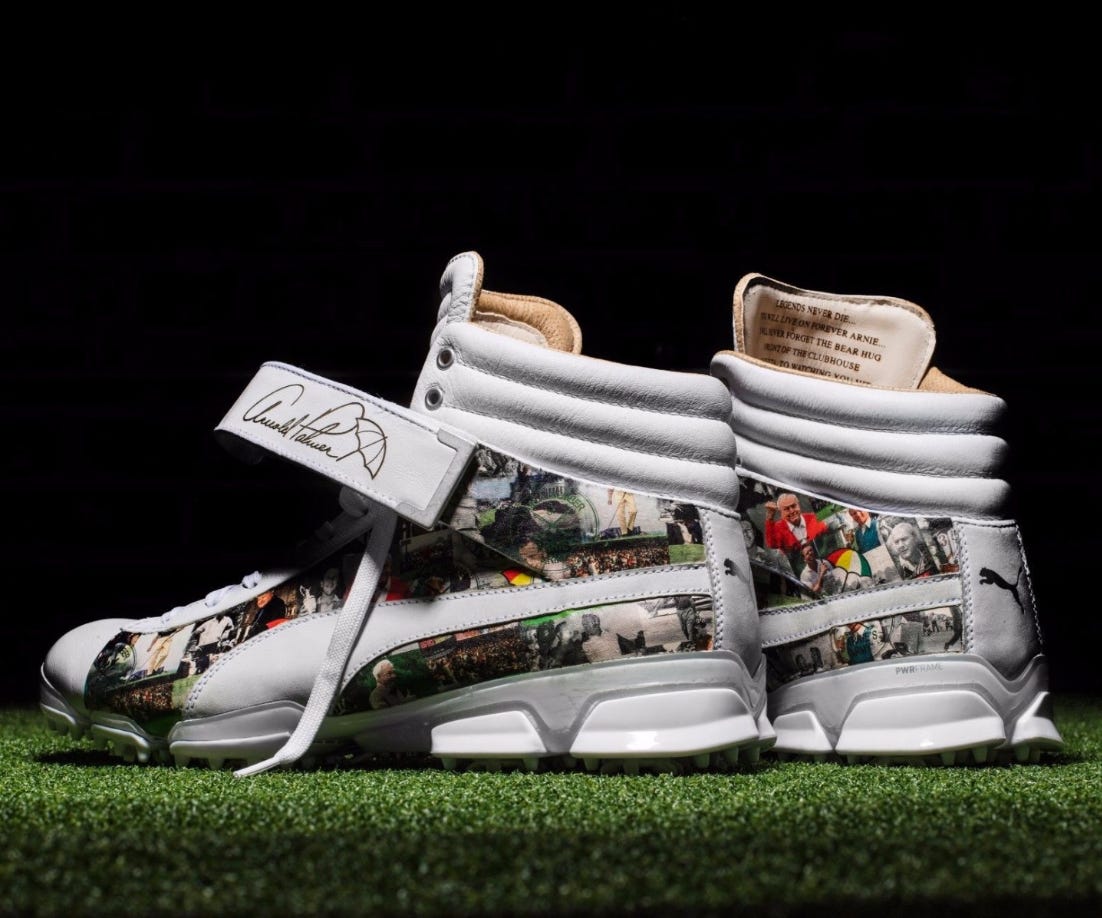 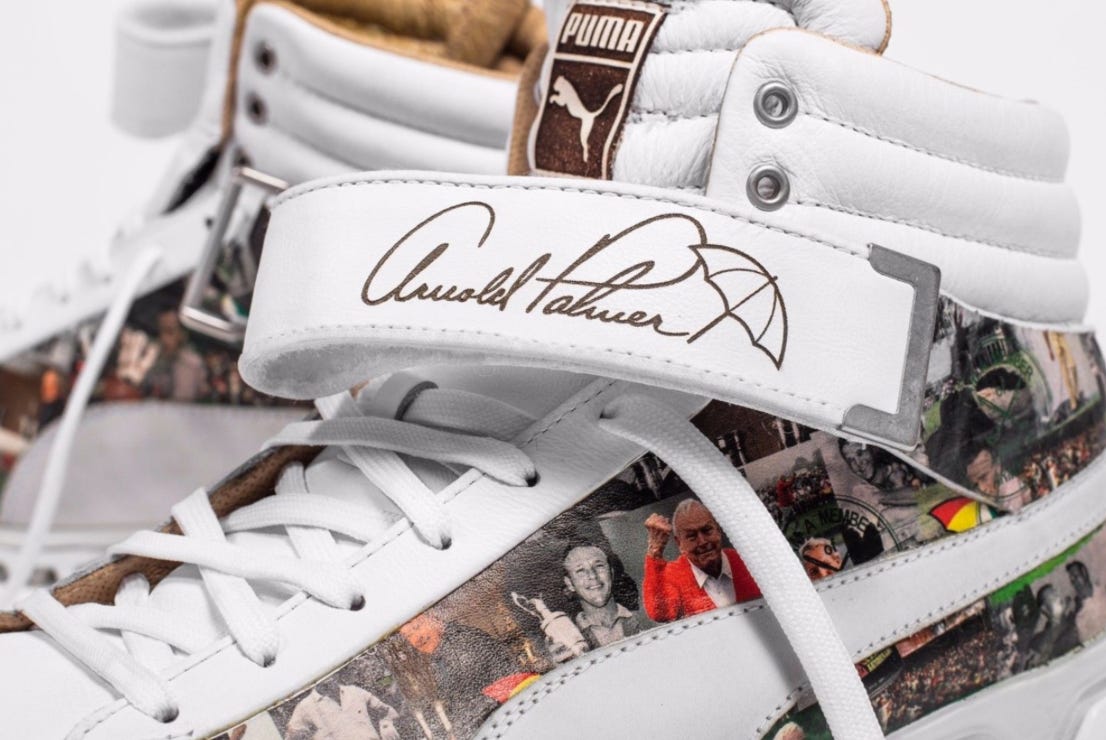 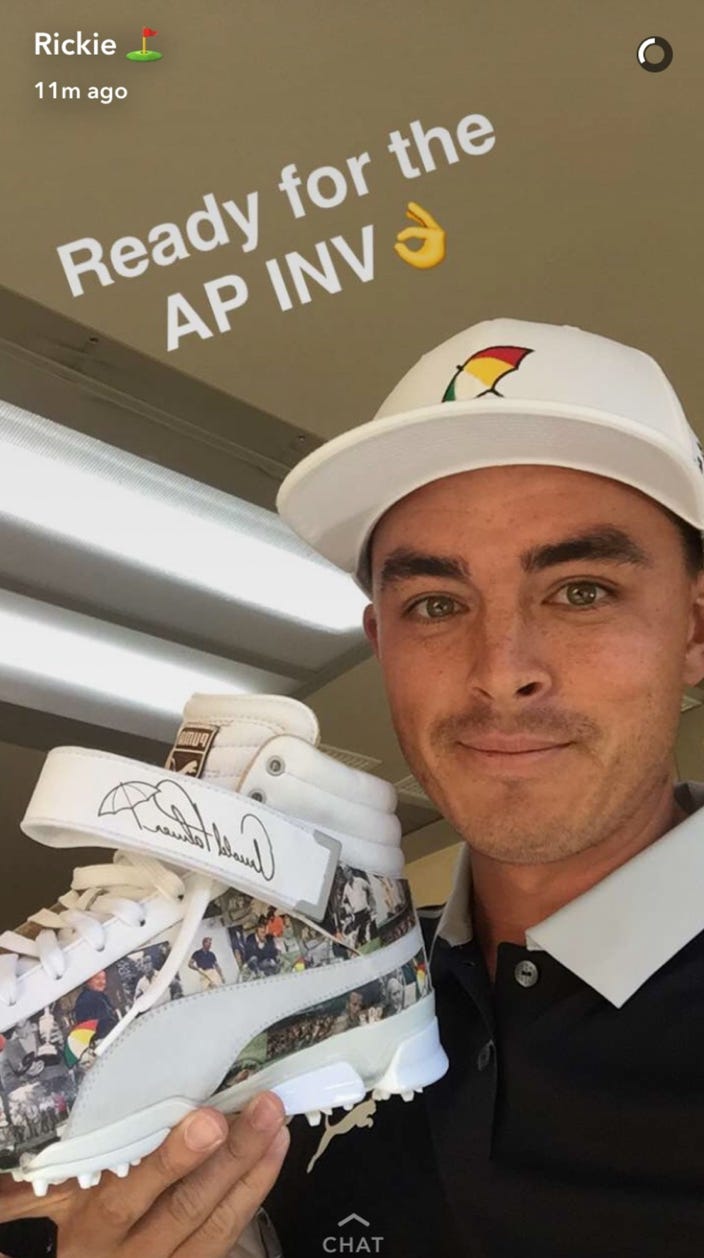 Golf Digest- The tributes to Arnold Palmer at Bay Hill this week will be shared all week. But it’ll be hard to beat how Rickie Fowler is honoring The King at at the Arnold Palmer Invitational. The King’s influence on the game (and sports) is unmatched and chief among that is his impact on golf style. Fittingly, as his generation’s equivalent of defining “cool” in a fashion-forward sense, Fowler has partnered with Puma to honor Palmer in an awesome way — and one you can take part in. Fowler will wear the special-edition Puma shoes in Wednesday’s practice round at Bay Hill, and the second pair will auctioned off for charity starting Wednesday and running through Sunday to benefit Arnie’s Army Charitable Foundation. (check puma.com for more info) Arnie’s signature was laser-engraved on the Velcro strap of the shoes, designed by Dominic Chambrone, known in the apparel world as The Shoe Surgeon. You can see the iconic umbrella logo behind the tongue of the left shoe, and on the right side, there’s a quote from Rickie on Arnie’s influence. Here’s what it says from the shoe:

HEAT HEAT HEAT. Heat on the feet for young Rickie Fowler. I kinda wish he wasn’t just wearing them for Wednesday’s practice round. He should rock those bad boys for the whole week. Maybe even wear them all year. Or is there some sort of rule against shoes like that that I don’t know about? If not, wear’em all week. No way no how he doesn’t win the tournament this week with Arnie all over his shoes. 58, 58, 58 and 58. Wire to wire victory.

There’s another pair of the shoes that are being auctioned off. They’re going for a pretty penny on eBay 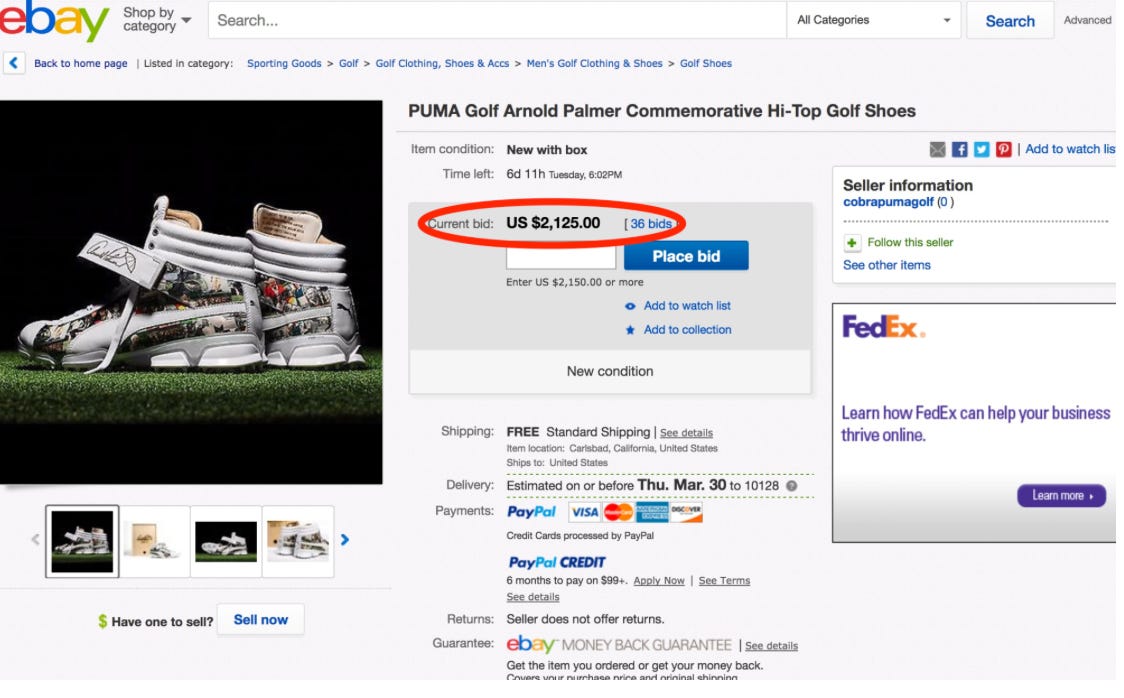 People out there just casually drop two grand on shoes