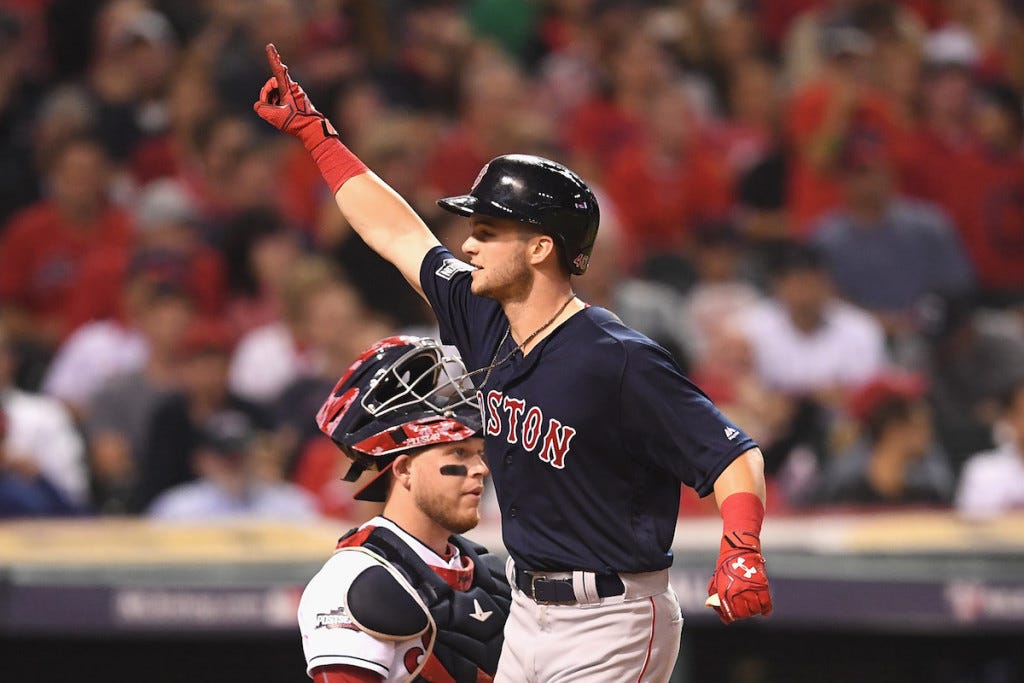 Opening Day is less than four weeks away. For the most part, there’s little to no major competition going on at Red Sox camp.

Sure, there are some bullpen guys vying for spots on the roster, but nothing “major” as far as the starting nine goes. More or less, we knew who the Opening Day starters were going to be before anybody even reported to camp. One of those Opening Day starters, for the first time in his major league career, is going to be 22-year-old outfielder Andrew Benintendi. But just because we knew who was starting at which position, that doesn’t mean that we knew who was batting where.

We took a call on the Baseball Show this past Sunday about the lineup, and this was my best guess — Dustin Pedroia 4, Andrew Benintendi 7, Mookie Betts 9, Hanley Ramirez DH, Xander Bogaerts 6, Pablo Sandoval 5, Mitch Moreland 3, Sandy Leon 2, Jackie Bradley Jr. 8. You could even bat Bradley sixth and shift everyone down a spot to have Sandoval, Moreland, and Leon as your 7-8-9, but I like Bradley hitting ninth, just because he’s performed so well in that spot in the order (.341 BA, .986 OPS in 147 PA batting 9th in 2016). Ideally, his skill set fits better with him batting sixth, but the Red Sox have gotten the most out of Bradley when he’s hit ninth. I’m fine with either.

The original lineup that I proposed doesn’t exactly look optimal, because the loss of David Ortiz in the middle of the order really prevents the Red Sox from being able to break up a string of right-handed hitters. But my Baseball Show co-host Lou Merloni pointed to the Toronto Blue Jays last year as an example of a team that featured several right-handed hitters in the meat of their order, and it didn’t matter. If you can hit, you can hit. Fair point.

However, it sounds like the Red Sox aren’t comfortable with going with that many right-handed hitters consecutively in the middle of their order. They’re reportedly throwing around the idea of batting Benintendi third. If they were to do that, now what does the Red Sox lineup look like? Well, for me, if you’re batting Benintendi third, I’m moving Bogaerts up. I think a lineup with Benintendi batting third would look something like — Pedroia 4, Bogaerts 6, Benintendi 7, Betts 9, Ramirez DH, Bradley 8, Sandoval 5, Moreland 3, Leon 2. Right, right, left, right, right, left, switch, left, switch. Have better balance in your lineup. You can’t.

The only concern with this now is whether or not Benintendi is ready for the expectations that come along with hitting third in not just any major league lineup, but arguably the best lineup in baseball. Benintendi primarily hit ninth last season (25 games), hit second once, fifth once, and hit eighth seven times. Hitting third is an entirely different animal, reserved for one of the best, if not the best pure hitter in that particular lineup. I’d obviously argue that that destination still belongs to Betts, but for the sake of balance in the lineup, having Benintendi hit third will make all the sense in the world if he lives up to the expectations that both the team and the fans have set for him, as he enters the 2017 season as the No. 1 prospect in baseball.