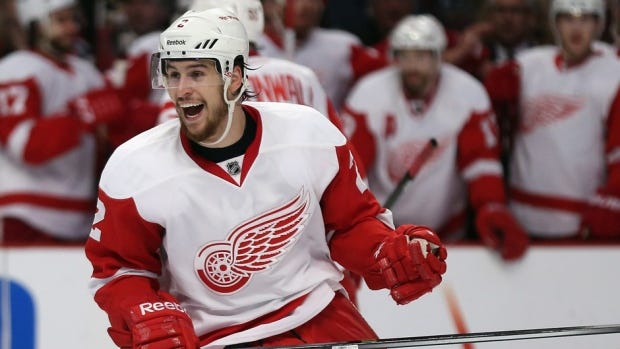 Gut reaction? Looks like a bit of an over-payment compared to the rumored price of just a lone 3rd or 4th-round pick when Smith was first announced to be on the block. It’s not that I really care about moving a spare #2 in 2018 & their #3 this year – but we were lauding Gorton on not biting to overpay for Shattenkirk just last night. Granted the prices aren’t in the same stratosphere but again that’s just my gut reaction. If it’s in the cards to ink Brendan Smith over the summer then it makes a little more sense (as long as it doesn’t eat into Shatty money). Either way, the Blueshirts got their contingency plan. So where does he fit?

Well for now that’s an easy question. With Klein still battling back spasms & Girardi out about two weeks due to his ankle, there’s ample room for Smith to make a great first impression. He may get thrown right next to former Badgers teammate Ryan McDonagh on the top pair if AV doesn’t want to overhaul his duos completely. If not, I’d love to see Brady Skjei soak those top minutes. Smith isn’t a guy who’s gonna “wow” anyone. He’s a solid skating big body who simply plays excellent defense. He won’t light up the scoreboard, doesn’t block shots, doesn’t throw the body a ton (although he’s got a mean streak) – but possession nerds love the 28 year-old for his shot suppression ability & knack for responsibility with the puck in his own zone. Red Wings fans seemingly disagree with that description, but clearly those are areas the Blueshirts could use help in.

There’s a bit of risk here though. Smith has missed a month of action on two separate occasions this year due to a balky knee. He’s returned to average over 20 minutes in 9 games since his second stint on the shelf, so let’s hope he’s all good. Last year, he had a hard time cracking the Red Wings top 6 when they were all healthy. While his skillset certainly makes sense as a welcome addition to a weak Rangers blue line, the addition of Smith isn’t a slam dunk improvement. If the rest of the defense is healthy, will AV play Smith over Kevin Klein? How much time does he have to adjust to his new team? Will there be follow-up moves over the next 24 hours? We’ll see. For now, the Blueshirts are hoping to catch lightning in a bottle with a low-cost move on a guy who hadn’t reached his potential in Motown.