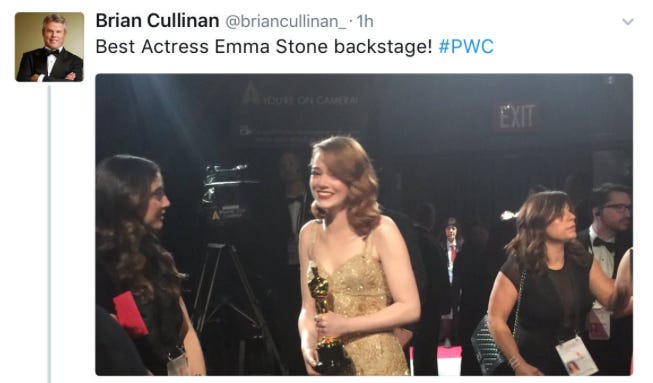 TMZ- This is the guy who we’re told is responsible for the biggest screwup in Oscar history … the guy who handed Warren Beatty the wrong envelope. His name — Brian Cullinan — an accountant at Pricewaterhouse. He’s a veteran … 30 years at the accounting firm.

Here’s the thing … Brian was supposed to discard the spare Best Actress envelope and hand Warren Best Picture. As for why … we know this. Brian was tweeting like crazy during the ceremony, posting photos … so he may have been distracted. Brian has since deleted the tweets, but one was a pic of Emma Stone with her Oscar. If it was tweeted right after her win, that’s exactly when Brian should’ve been prepping for the next category … Best Picture. 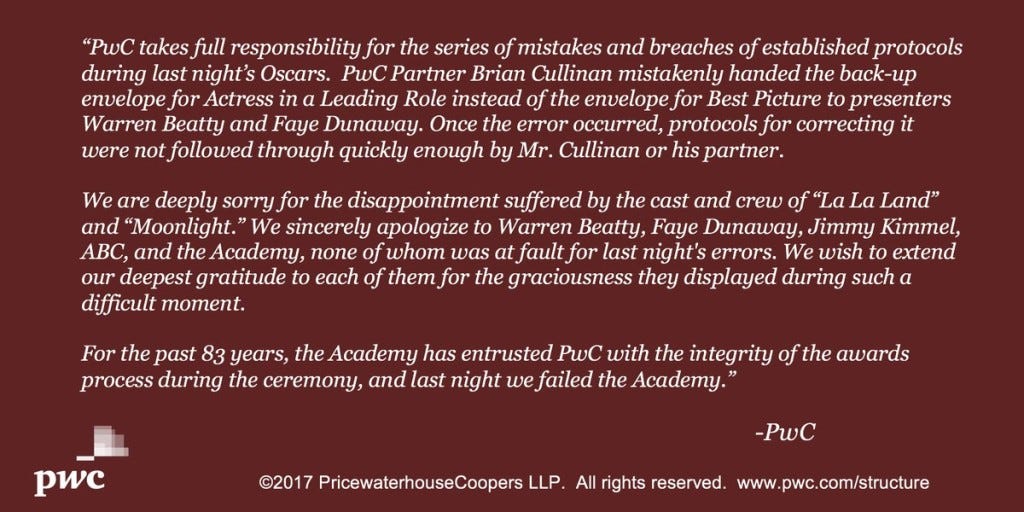 Of course that is what happened. I mean don’t get me wrong, everyone was ready to throw Warren Beatty’s old ass under the bus if the envelope didn’t say Best Actress In A Leading Role because old people fuck up all the goddamn time.

But once pictures of the envelope came out, Dick Tracy was off the hook. Which then led to trying to figure out what happened that led to Warren getting that envelope. And a starstruck accountant is the perfect suspect. Someone that deals in Hollywood everyday doesn’t give a shit about rubbing elbows with a bunch of stars. But if you get a commoner out there that would probably make Meryl Streep sick to her stomach, that’s when the problems can occur.

Poor Brian was likely used to living in cubicle hell, surrounded by neutral-colored walls and florescent lighting. The only parties he attends at work are the occasional birthday “party” in the break room when he eats shitty cake and sings a depressing rendition of Happy Birthday with his fellow accountants. How is he supposed to concentrate if Amy Adams’ titties are poking him in the eye or he gets so close to Jen Aniston he can smell her hair as she continues to dial up 95 MPH on the gun? If he wasn’t tweeting on the job, he wouldn’t be human. And God knows the private texts he may have sent to his buddies. Like most people, I wouldn’t even notice if my house was burning down when I’m on Twitter. My wife has lost countless hours of her life talking to me while I tweet. And anyone that has ever tried to tweet while working knows that’s the fast track to fucking up just the smallest thing. Maybe it’s a typo, maybe it’s giving the wrong envelope for the biggest award of the Oscars. Playas fuck up. Being surrounded by women you’ve seen on the silver screen and/or The Fappening has to be distracting.

Which is why I stand with Brian Cullinan. Dude was just trying to feel like a celebrity for one night after THIRTY years as an accountant. A real life Cinderella. He flew too close to the sun and his wings ended up extra crispy. But he still lived a night that most accountants would murder for, epic fuck up and all.