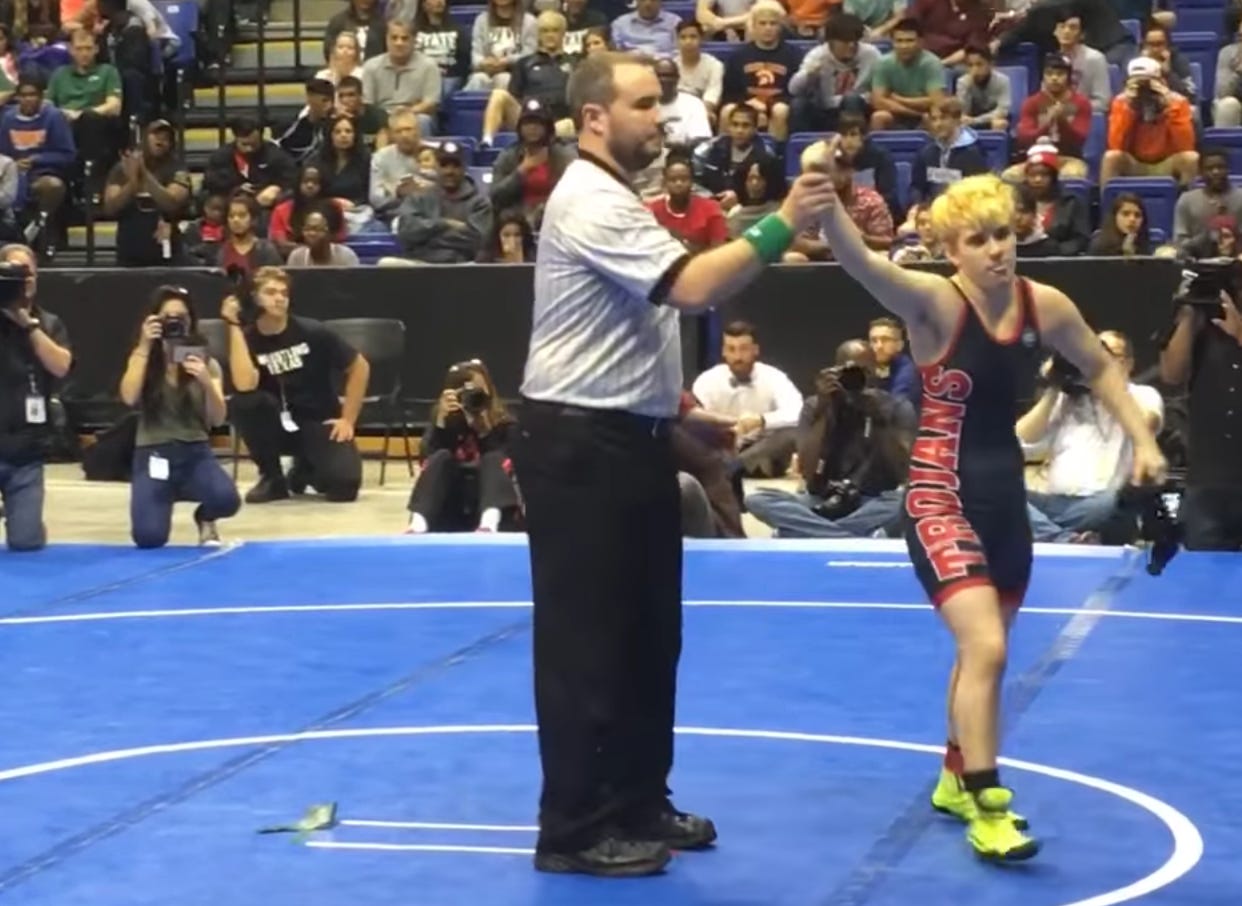 NBC News – A transgender teenager won a Texas state title for girls wrestling on Saturday — even though the wrestler, 17-year-old Mack Beggs, identifies as a boy. The junior from Euless Trinity, northwest of Dallas, emerged victorious in the 110-pound weight class to cheers and jeers after forfeitures from previous opponents and a bid to block him from competing failed. “I wouldn’t be here today if it weren’t for my teammates,” Mack said in a statement after the match, according to The Dallas Morning News. “We trained hard every single day. Every single day and that’s where the spotlight should have been on.” Instead, much of the focus was on Mack, who is transitioning from female to male and is taking testosterone. Mack would have preferred to be wrestling boys, but state policy forced him to compete according to the gender listed on his birth certificate.

First thing’s first you gotta be from outer fucking space if you’re a high school chick on the wrestling team. I mean thats gotta be the strangest collection girls imaginable. You go to a girls wrestling meet, you’re gonna encounter the weirdest girls in the world. They make the female hockey team look normal. So Mack Beggs here is just trying to keep up with the competition. Its all a bunch of butch chicks. A bunch of girls that have basically already completed their transition. A bunch of alien girls with cauliflower ear. I think I’d rather wrestle against the men’s team simply because the girls team weirds me out that much.

And so thats why ultimately I’m  OK with this tranny doing steroids. I’m OK with this 110 pounder juicing like shes in Major League Baseball in the 90s. Those testosterone injections are sorta just leveling the playing field. Its almost like how the pitchers needed to start doing PEDs because all the hitters were doing it. If Mack Beggs wanted to keep up with the rest of the competition in the ridiculous world of high school female wrestling, she needed to turn to the needle. I got no problem with this.

I’d watch the fuck out if I was on the boys team. A roided up chick wrestler is coming and theres no stopping her if you’re merely just a high school guy.