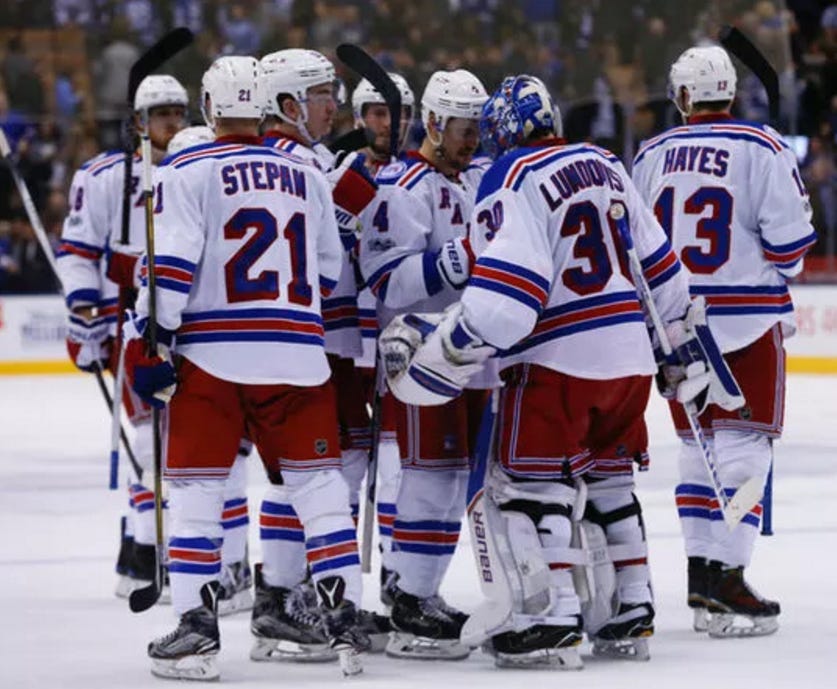 You can’t ask for a better turnaround over the last 5 weeks than the one Henrik Lundqvist & his Rangers have been on – and that’s including yesterday’s home beatdown at the hands of Tortorella’s Blue Jackets. Since a 7-6 loss to the Stars in mid-January, the Blueshirts have caught fire. 12-4-1 including a pair of well-timed losses to CBJ that keeps NY in the most ideal playoff position in the East. 4th in the Metro is where the Blueshirts wanna stay to skirt the powerhouse Caps & Pens until the ECF. So if the Jackets gotta be the hiccups during a hot streak that’s perfectly fine.

The Lundqvist resurgence was something I almost gave up on. Through 30 starts, The King was a joker with a GAA pushing 3 and save percentage barely above 90. He’s returned to form in a big way. In 14 starts prior to yesterday’s 5 spot, Hank posted 10 wins with 1.91/.939 peripherals. The only goalies on his level over that span happen to anchor the two top squads in the league. His only kryptonite of late? When his team plays good defense. NY is 0-4-1 in the last 5 outings Lundqvist has made less than 30 saves. When he’s peppered with 30+ pucks, they’ve won 8 straight.

It’s a rare opportunity to applaud the recent play of Rangers veteran Dan Girardi, so I’m gonna take it. You know how to tell if Girardi’s playing well? If you don’t hear his name – and lately, he’s been a ghost. That means he’s not fucking up & just quietly doing his job. Obviously he’s still a possession nightmare but that’s not gonna change. He was on the ice for only ONE 5×5 goal in 13 games heading into Jersey though. G racked up a couple minuses this weekend but one was a weak wrister that dribbled off Raanta’s glove Saturday & another was garbage time last night. It’s OK to give credit where credit is due, even if it’s the guy fans are used to scapegoating the most.

While we’re doling out gold stars to blueliners, how about 22 year-old Brady Skjei? After struggling to gain AV’s trust early in the season, the kid has hit his stride. Since the Blueshirts have been hot, Skjei has been among the top 10 scoring defenseman despite just 17 minutes a night while the usual studs across the league are piling up 25. Maybe Brady hasn’t been in the middle of every on-ice goal celebration lately, but it sure as hell seems like it. I hope fans realize what we’ve got with this kid. With a little more growth defensively, Skjei’s gonna be on Mac’s heels real soon.

So what’s gonna go down at the trade deadline? Who knows – but I can tell you what’s not gonna happen. Teams have apparently been ringing Gorton’s phone off the hook to talk about JT Miller. No chance. He’ll be getting a Kreider-esque deal before he hits free agency next summer. That’s the gamble NY takes with these 2-year bridge deals. Rangers could’ve locked him up for under 4 mil prior to this season & bought out some FA years – but Miller exceeding expectations isn’t a bad “problem”.

There’s been talk about various defenders the Rangers could acquire on the cheap (i.e. Brendan Smith). People need to remember two things – first, the Rangers need on D is very specific. A RH offensive weapon is optimal, hence the love affair with Shattenkirk. Second, unless Gorton is somehow dumping Klein, Vigneault is simply not going to play someone unable to rack up regular minutes on an inferior team over his veterans or their in-house option in Clendening. In his last 14 games of sporadic playing time, #4 has done what’s expected & that’s generate some offense from the back end (2G 4A). He’s had 5 games with at least 3 SOG and, although he’s still still a scary sight defensively at times, it’s becoming clear Clendening is as good an option (with protected ice time) as any of the mediocre names being kicked around.

The price on Shattenkirk may be dropping significantly after news came out he shot down a move to an Eastern Conference team (rumored to be the Bolts) who were offering 7 years/$42M. He also nixed an earlier deal that’d have shipped him to Edmonton. If he won’t be committing to extension, the Blues will have to ship him out at rental cost – which then becomes a price the Rangers consider. A #1 pick & prospect (Gropp?) may not only be enough to bring Shattenkirk to NY for the stretch run but also gives the Blueshirts first dibs on negotiating for the future. I know fans may sigh at the possibility of giving up future assets at the deadline yet again, but this is different. There’s no better piece out there that completes the Rangers puzzle like Shattenkirk does. And coughing up a late first-rounder isn’t that big a deal with the upcoming draft class projected to be pretty weak. Rangers seem pretty adept at scooping up college FA’s to fill the voids they’ve created anyway.

If the Blueshirts gotta wait until July to welcome Shatty to Broadway so be it. But with the way this team has been playing lately from Lundqvist on out, they’d be a full-fledged 2017 Cup contender if we’re just counting days & not months. Make it happen Gorton. It’s gonna work this time, I swear.