Its NFL Combine week which means its the time of year when a bunch of kids get stripped down to basically there underwear and get paraded around in front of a bunch of old white men that have been watching them on tape for the past 9 months- thats right folks, I’m talking about the Oscars.

We’ll get to football here in a moment, but before I stick to sports Id like to address the fiasco that took place at the end of last nights show. Warren Beatty who is literaly so vain that he thought that a song that was written about him was written about him, gave the Oscar for best picture out to both La La Land and Moonlight in the ultmate example of our “everyone gets a trophy” culture. Basically all you have to do to be nomnated for a Oscar these days is stop saying the n-word on tape for 7 years, or make a animated movie that has a couple sex jokes for the parent’s to pick up on. Its not rocket science.

The Oscars, with there glaring pro-moon bias seemed to have been staged in order to make NASA seem cool again to receive more funding. Having the star of Apollo 13 AND Alien Bill Paxton die on the morning of the show should of been clue number one that NASA was trying to get some buzz going so that they could avoid going the way of the Dodo and the EPA and losing all of there funding. Looking through the in memorium you had Paxon, Ziggy Stardust, ALF, and John Glenn. All people with close ties to outerspace, all mysterously passed away in the last year. Its not rocket science.

Case in point,  Hidden Figures was everywhere during the show depsite the fact that its the first movie about math that anyone ever saw that wasnt rolled into your classroom on a a/v cart. Lets not even discuss the fact that Hidden Figures plagerized its plotline 100% off Moneyball except you replace the playoffs with the moon, and the Athletics with the unathletics. NASA had to figure out how to nerd its way into getting to the moon by using stats and hiring african american females who had never been a rocketship, but they were expected to somehow know how to build one. Plus the noticably absent parts of Miguel Tejada, Mulder, Zito, and Hudson corrlated suspiciously to the lack of screen time for Werner Van Brann and the rest of operation paperclip.

Clue numebr 3 is the fact that Moonlight won. Again, a obvious pro-moon bias. The Crescent moon is the symbol of Islam, and Hollywoods anti-christian bias has been no more apparent than when you realize its literally been months since a movie about Catholicism won Best Picture.

But the real hero of last night was Jordan Horowitz- the producer of La La Land who was so gracous in defeat that they should of just given him Moonlights award. Its telling that his sportsmanship stole the show when he tried to return the award that he didnt win, while Moonlights director didnt even try to give his back after they gave it to him. Cam Newton could learn alot about humilty from Mr. Horowitz, who acted like he was put on this earth to give up a award that he wasnt entitled to with dignity. But instead of doing the sporting thing and giving him his mistaken award back, the guy from Moonlight accepted his Oscar, showing his classic milleneal entitlement and keeping the trophy just because he won it. Maybe if he had lost a few trophies growing up he would realize what being a winner is all about- losing with grace.

So did Moonlight really win or did La La Land lose? Id say the latter. Yes, Pricewaterhouse Coopers may of made a mistake but instead of rewarding Moonlight for backing into a championship lets look at it realistically.

If you had told me that a accounting firm was going to mess up and artifically take power away from folks in LA and leave them with nothing but moonlight I would say that it sounds like a job for Arthur Anderson. But instead PwC managed a screwup for the ages, and left us with the indeliable image of Emma Stone in tears, and Ryan looking like the most torn-up, devestated, mangled-looking Gosling we’ve seen on screen since “Sully” came out. 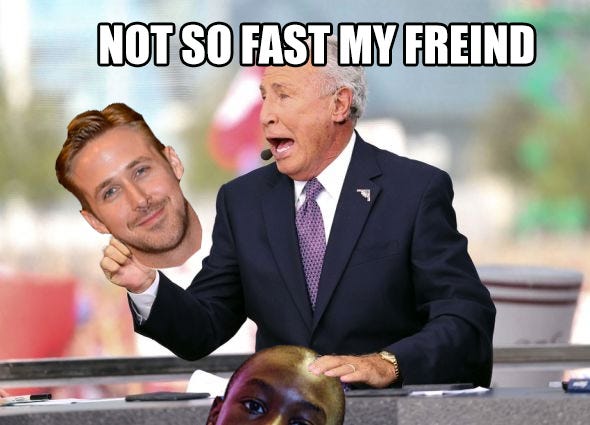 Warren Beatty has performed a great trick over the past 30 years and thats basicaly to not do anything and still be famous. The only mistake he made wasn’t reading the wrong name, it was getting out of bed and agreeing to try something new in the first place. If he had just pulled a David Carr and sit at home all day doing bicep curls this whole thing would of never happened. But instead it was like when they let Mark Sanchez into a game for 2 plays and he throws downfeild, gets intercepted and breaks his collarbone trying to tackle the guy. Folks he had such a difficult time trying to read I call this guy Warren Peace.

1. Matt Elam appears to be abusing drugs, so the Ravens have quickly distanced themselves, noting that the drugs have apologized for there part in the role they played the night of the incident.

2. RG3 was working out with his girlfriend Grete at FSU over the weekend on the track when he got into a altercation with someone who got under his skin or at least one of his dozen compresson sleeves.

I guess Griffin was mad that the other guy was faster then him but thats Griffin for you allways making everything about race.

3. The Ryan twins are taking there bi-annual ‘we’ve been fired from our jobs and we’re millionares so it’s time to get drunk and be allowed into awesome places” road trip down to spring training. Just check out Rexs awsome shirt:

4.Best cosutume should of gone to color rush this year The Jags/Titans period piece is allways a real treat to watch with the puke gold, and bile blue uni’s streaking across the feild like a low-rent cut-rate version of tron.

5. It is time for the scouting combine which signals the end of the NFLs two week offseason which mean’s its also shrimp cocktail season in Indiana at St Elmos steakhouse. I’m more of a takehouse guy then a steakhouse, which is why my football nugget’s can be described as both rare and well done simultanously. I dont really care for anyone in this combine class so far besides your Christian McCaffreys his Dads probably going to pull a Lonzo Ball’s Dad and demand he get drafted by the Marine Corp or soemthing so he can learn the family trade of the salute. So far Baker Mayfield is the only guy whose been training to his fullest extent and hes not even eligbile. I trust a guy who goes out in college and get’s arrested way more then I would trust a kid with a clean rap sheet whose been hiding from the cops for 3 years.

6. Best orignal screen play should of gone to Gus Bradleys whiteboard for lifetime achievement on 3rd and 28.

7. LeSean McCoy fired off a shady tweet over the weekend indicating that he might be on the way out in Buffalo. McCoy is currentley still under contract so the tweet is by letter of the law tampering with himself, no offense to Jamal Anderson. Heres the issue- players have been immune to the consquences of tampering for years with General Managers and owners assuming all the risk unfairly. Meanwhile players can follow and unfollow whoever they like on twitter, lending valuable clues to internet sleuths.Unfortunately if your a running back for the Bills there really isnt any more of a punishment that can be levied on you so Goodells hands are tied in this circumstance.

8. OJ Simpson- “Made in America” won a Oscar in a huge blow aganst NAFTA. ESPN’s documentary just proves that if you make anything a week long miniseres people will say its important . Thats why I write a million words in each column on account of I know ppl will skip most of them but say they read it to sound smart. The documentary hit most relevant parts except it failed to touch on the fact that he still hasnt been supsended by the NFL. OJ is getting out on parole soon and could be a classic Belichick reclamation project to get him in a system that stresses accountabilty.

9. I have a brand new book coming out this week avalable only online called “The People of The United States Of America vs Skip Bayless” and you should definitely buy it. Its basicay the best piece of literature to be written since the parts of the New Testament that I agree with and should be out any day now. I think its going to be like $5.50 or something so just dont buy condoms for a year and it’ll pay for itself.

10. Folks this is going to shock you but Peter King and Mike Mayock think Christan Mccaffery might go 32nd overall to the New England Patriots:

I’ve read about 10 mock drafts this year not to brag, and every one has McCafferey going to the Pats. He just seems like he would be a good fit in Belichicks system that emphasizes credit score & player’s abilty to pay a poll tax Not to make this a racial thing but its allmost like the Patriots are the only team that understands groin mass can limit hip fluidity, which is the exact trouble Teddy Bridgewater found himself in last year. Also less of you to tackle when your not as well-endowed. Probly why Aqib Talib ate Greg Olsons lunch in the Superbowl.

Runner up: license to drill