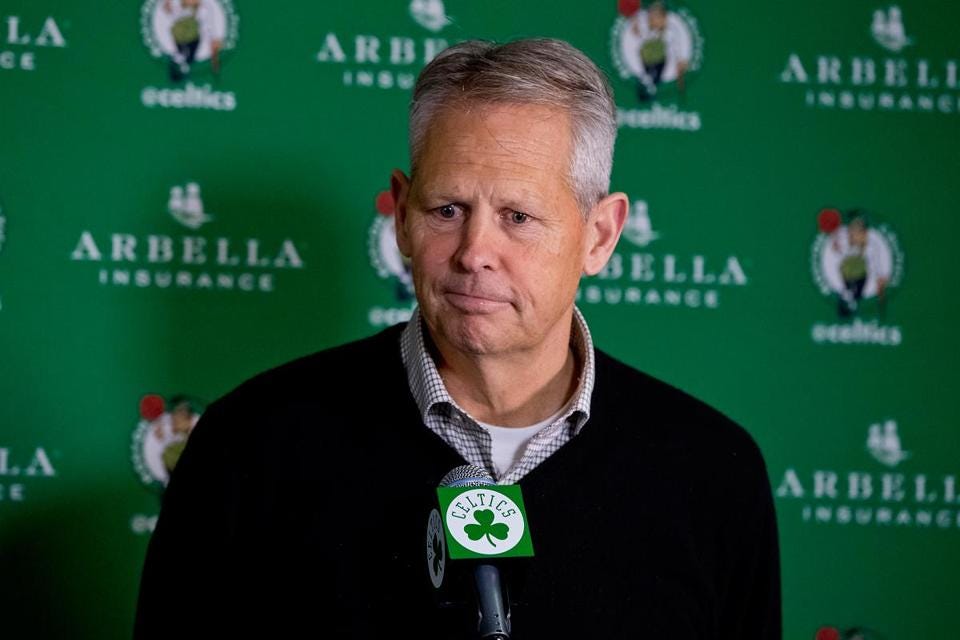 Heading into the 2017 Trade Deadline I made my stance pretty clear. I wasn’t one of these people who needed Danny Ainge to trade the farm for a star. Once we started to hear the Paul George and Jimmy Butler rumors, it felt like a repeat of last year. I tried to warn everyone not to get sucked into the hype, but all it took was one damn emoji tweet and I couldn’t even take my own advice. I was so caught up these last four days even the slightest troll job had me running to the bunker. In the back of my mind (and hopefully yours too) I always knew that a result like today was the most likely, but the whole ride is part of what makes this a fun time of year. It’s fun to obsess over fake rumors that have no shot, stalk guys like Stein and Woj, and surrender yourself to the madness that is the NBA in 2017. Even though they didn’t make a move I would not trade the fun I’ve had with stoolies this week for anything in the world. It is slightly comforting to know there are other wackos out there just like me.

Now having said that, I’m not all butterflies and lollipops right now. While I am all for not bringing in someone like Paul George now that we know the price, it does really bother me that Ainge did absolutely nothing, not even a low level rebounder type deal. Let’s look at both ends of the trade spectrum

– If you would have done that package for Paul George just so that the Celtics could have a star for 1.5 years, I’m happy you aren’t running the team. As with everything it always comes down to price. Really it’s the same situation as Boogie Cousins. Do you want to give up anything for a guy who is making it public he has every intention on hitting the open market at the end of his current deal? I’m not sure sure I do. Once I heard the final request from IND, I commend Ainge for passing.

– Jimmy Butler. Will there ever be a day the Celtics and Jimmy Butler aren’t tied together in a rumor? Time will tell. After seeing the moves the Bulls made, I have a theory as to why this didn’t happen today. They want to know what that BKN pick is before completely diving into a rebuild. I think. At this point as Big Cat will tell you, nobody knows what the fuck is going on over there. I know it sounds cliche, but with a player like Butler given his situation, this is not a deal that I would consider dead. Nobody wants to “wait until the summer” again, but if this really was close, it makes sense to revisit in a few months. No problem here with Ainge.

– What has become a common take with the Celtics lack of trades as other teams pull them off is “LOOK AT THE PRICE HOW DID DANNY NOT DO THIS!”. I hate this for a number of reasons. Just because someone like Nerlens Noel goes for absolute trash does not mean that the Celtics had that same luxury. If that was in fact true, I can understand the frustration. If PHI wanted anything of legit substance, it’s the same situation as Boogie/PG13. As a RFA next year, if Ainge doesn’t think Noel is a max to close to max player, why give up anything? At the very worst, if he really does want him, they can just make him an offer this summer, while keeping all their assets. I would say this mildly annoyed me.

– PJ Tucker Trade. OK I get it, TOR traded for a guy that the Celtics were rumored to like, and now all the sudden PJ Tucker is what’s going to be the difference maker that makes up the FOUR GAME difference between the Raptors and the Celtics for the 2 seed. I find this interesting because I had people tweeting me that they would be mad if PJ Tucker was all the Celtics ended up doing, and now that they didn’t do it he’s turned into a player they had to have. I could give two shits about this and will not get mad at Ainge for it.

There’s also the buyout market to consider right now. Guys like Bogut (might be a stretch), and Terrance Jones (YES) are still out there that would address the need I had always wished Ainge fixed this week. Maybe Ainge is banking on guys like Yabu and Zizic next year and that’s fine, but I can think of a few guys I would cut of either if those guys became a legit option. If Ainge completely avoids the buyout market, then I think it’s valid to get VERY MAD, but if he’s telling me there wasn’t anything that made sense to trade, then I believe him yo, I dunno why, I just do.

Essentially the Celtics are playing with house money. If they want to see how far this team can go as is, utilize the picks, and see what happens down the road, who’s to say that’s not the right move? This team is still pretty fucking good, still a 2 seed, and hasn’t even had a long run of their core guys together. There is no reason to think they still can’t snag that home court advantage in Rd2 (if they are able to get past one round), and I’m not ready to say it’s a forgone conclusion they lose that series. I think we are all in agreement this team, even if they made some of these big star trades doesn’t get them past CLE, so why not stay the course and who knows, maybe you get to the ECF anyways.

The goal of this season has always been to make progress and show you are a viable destination to good free agents. That’s still happening. At the end of the day it sucks all that fun on Twitter was for nothing, but the Celtics are still in a great place and I don’t think we should lose sight of that.

One thing that I think we all can be pissed about is how Wyc sort of jerked us off for the past three years talking about fireworks. I bet that’s something he regrets, and it’s probably the main reason fans are pissed off, and rightfully so.