I wrote yesterday about how an eventful NHL Trade Deadline next Wednesday is the only thing I want in this world after the past 2 have pretty much been busts. Now it’s sounding like we’ll at least see a Kevin Shattenkirk deal be made at some point before the 3pm deadline on March 1st. But no matter what happens, at least we’ll get a show on Deadline Day. The reason, of course, being that Ilya Bryzgalov will be joining the Sportsnet crew for their Trade Deadline coverage to talk deals, global warming, and the universe.

Remember that time that TSN aired this tweet about Lupul banging Phaneuf’s wife on their trade deadline coverage a couple years ago? 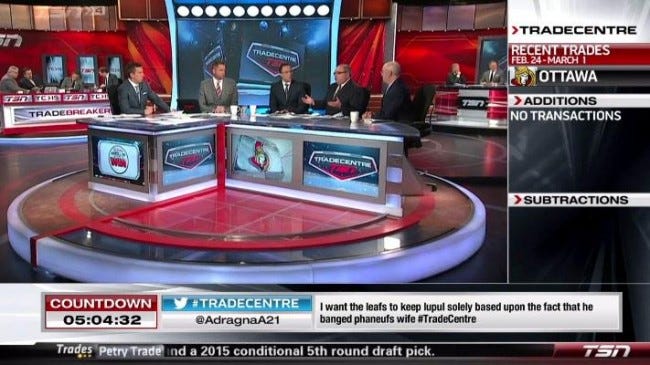 Well I expect this to go a lot like that. In the sense that nobody could even get dealt on Monday but it’s still going to be non-stop action throughout the day. We saw when Bryz covered media day at the NHL All Star Game a few weeks ago. You put a microphone in front of this guy’s face and he’s going to crush it. And real talk, I’m really pulling for him here. Obviously his career in the NHL came to a very bizarre end. He sort of became a joke around the league but seems super genuine. Bizarre as anything, but genuine. It would be cool to see him crush this broadcast and turn that into another career instead of just popping up sporadically for laughs.

6 days. Dreger says Shattenkirk is almost certainly on the move. I’d have to imagine Colorado gets rid of at least 1 or 2 of Duchene, Landeskog and Iginla. Who knows what the Flyers will do. But hopefully NHL GMs hold their loads and wait until Wednesday to start wheeling and dealing. Respect the Deadline, guys. None of this bullshit where all of the deals are done by Sunday at midnight.