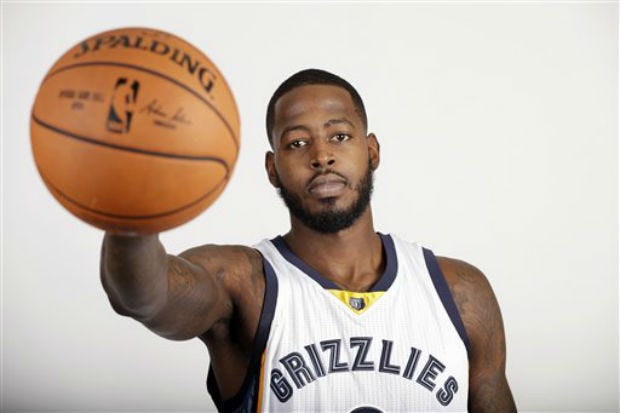 Chances are you saw this name float around late yesterday as someone who could potentially be the blockbuster deal Trader Danny makes today. You probably also said the words “Who the fuck is that?”. That’s OK if you aren’t aware of JaMychal Green, but there are things you should know about him if he’s really going to be all that the Celtics do today.

Green is a 26 year old, 6’9 227lb power forward who went to Alabama and currently starts for the Memphis Grizzlies. He broke into the NBA with the Spurs (which right off the bat should make you happy. They never mess up. Ever). Now that he’s in MEM he has earned time on the floor, and is currently experiencing a “career year”. I put that in quotations because his career year isn’t really what you think of when you say those words, but it also happens to be exactly what the Celtics need.

First the numbers. Currently in 56 games so far this year Green has respectable splits of 48/37%. While no one will ever accuse him of being Ray Allen, he is a big that fits the “skilled” and spacing needs that Ainge covets. He averages 9 points a game and most importantly, 7 rebounds. Now I get it, why when Twitter is talking about Jimmy Butler and Paul George should we even get remotely excited about JaMychal Green? I’ll tell you.

When you look closer at his production, you see a defensive rebounding percentage of 20.9%. That puts him 21st in the NBA among PFs. As a point of reference, this is the area code guys like Draymond Green, Blake Griffin, Bobby Portis, Paul Millsap, and Derrick Favors live in. This is not to say Green IS BETTER than those guys, but when it comes to defensive rebounding, one of the Cs biggest issues, he most definitely fills that need at a pretty good level. The second attractive part of his option is his salary. Green makes just 980K this year, will be a restricted FA next year, with a qualifying offer of just $1.3M. That’s basically nothing. I know Ainge talked about how he didn’t want a rental, but maybe he meant he didn’t want an expensive rental. Another reason I think Ainge might be in on this dude? He crushed the Celtics on the glass in their two meetings this season (averaged 7/9), and while almost everyone has good rebounding numbers against the Celts, I wouldn’t rule that out.

In terms of how he fits into this team, a lot will have to depend on what Ainge has to give up to get him, but I don’t see him starting here, only because that forces Horford to play the five which we know isn’t ideal. But pair him with Olynyk on the second unit, and that’s an instant upgrade over someone like Zeller.

So please, if this is all that ends up happening, don’t be a name slut. This guy can actually help and shouldn’t cost anything of high value to get. The sad news is it makes too much sense so it probably doesn’t happen. In the meantime, it’s time for the highlights.