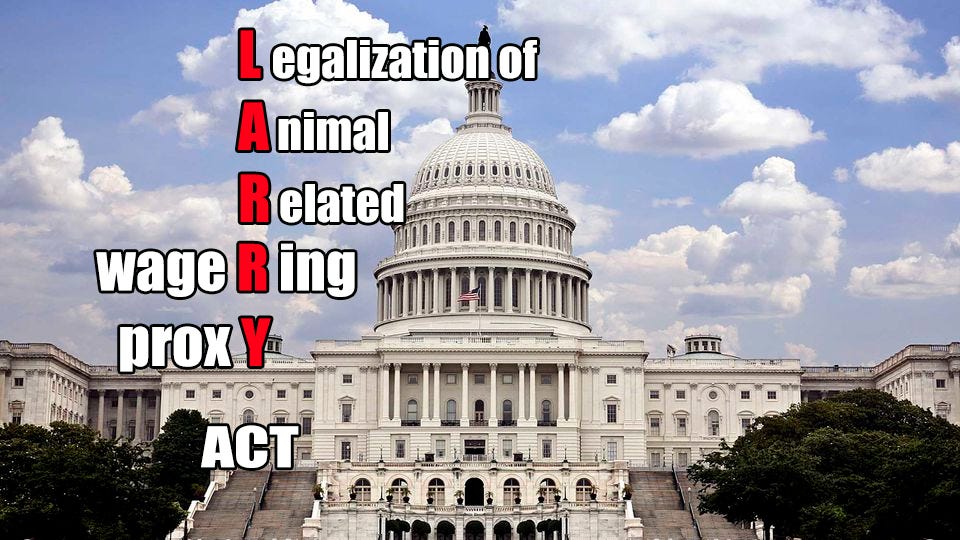 Theres a old saying from Abraham Lincoln (R- Illinois (people forget)) that goes, “never let a good tradgedy go to waste”. The sentiment was later echoed by Dick Cheney and probly your little brother when he spent all weekend cranking it when your parents went out of town for your great-grandmothers funeral. I think it definitely applies to the passing of our sweet boy, Larry II (49-34-2).

Larry II (49-34-2) was a goldfish, but more importantly he was a winner. As the award-winning musical quartet semi-sonic put it-“from every new beginning comes some other beginnings end”-  in that vain- its time to reframe Larries passing not as a loss, but rather as the beginning of a soon-to-be rescinded era in American History. I am using Larrys death to advocate for legalized sport’s gambling in America provided that it is done with the assistance of a animal. We all know the easiest way for those clown’s in congress to pass a law is for you to write it for them, so I have taken the liberty of drafting up a resoluton/form letter to send to your congressperson. Please forward this to your representative/senators or even like other states senators they wont check where your sending it from anyways:

As you know, President Donald Trump has passed a very well-thought-out and substantively cogent law saying that for every new regulation passed, two have to be elimnated like when a state legislature passes a new law regulating bitcoin fraud so it becomes leagal again to steal horses. Well let me point out some low-hanging fruit of a regulation that you can elimnate while also make you wildly popular among your coolest and most influential constiteunts.

How come you can use a service animal to bring a dog into a supermarket, on a roller coaster, or on a airplane while its wearing old-timey hilarious biplane glasses, but you can’t use one to gamble? Well its simple, there are too many regulatons. The most hated of which is the vile clause that sports gaming is excluded from viable reasons to certfy a service animal. In memory of our beloved goldfish, whose passing has affected millions of American voters, we propose eliminating the current federal regulation persecuting gambling animal’s under the service animal acts. Instead of defining a service animal as simply a dog that can get you out of commitments, why not just expand the justfications for having a service animal from “blindness, anxiety, and being to cheap to pay for a petsitter when you fly out of town” to also include recreational gambling? There are numerous mental health benefits. Studys have shown that people are less likely to be depressed while gambling, and nearly 50% of the time they are less likely to suffer from depression immediately after gambling. So why can’t a gambling fish be a service dog. Goes both ways.

Gambling animals will be designated with vests or perhaps a sort of kerchief or cape indicating there certification as working animals, and fed a special diet of either prime rib or absolutely nothing at all until it can figure out what the fuck its doing with its picks.

THEREFORE: It is with great honor and also great repsect for the memory of Larry II (49-34-2) that the I have taken the liberty of drafting a bill to be submitted to this 115th United State’s Congress- its called the L.A.R.R.Y. Act- or:

Which in the year 2017 hereby legalizes all sports gambling in the united states provided the bets are placed with the counsel of a non-human species.

If you do not have a animal the you can use as a proxy you are permitted to designate up to five animals that you are at least generally aware of to use as a proxy for your proxy but no cats. Using a cat as a instrument of joy is fundamentally opposed to there very nature. Instead of using a cat may we recommend turtles, a wasp that stings one of two different colored balloons painted to look like a flowers vagina or whatever, or your neighbors australian shepherd while he’s at work.

Also- I’ve spoken with the leadership of (the opposite party of whoever this letter is addressed to) and they think it is simply a terrible idea and they will fight it tooth and nail to oppose it.  But hey I guess your the type to get bullied around by the (libtard cucks/fascist swine). Which side of history do you want to be on? 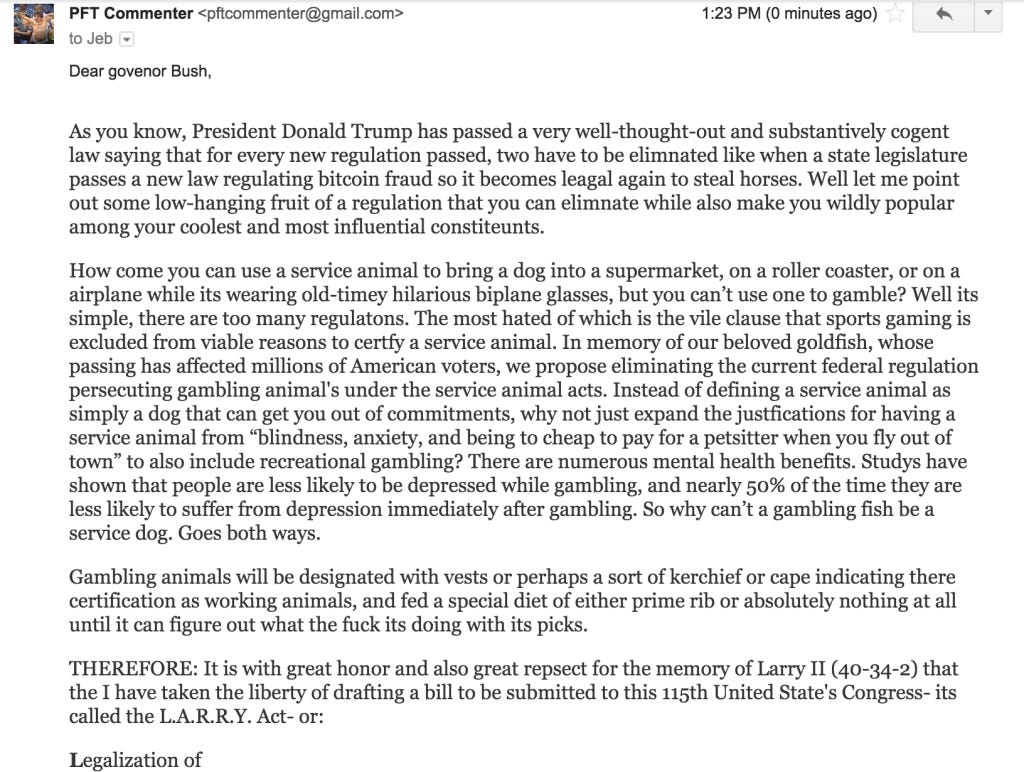