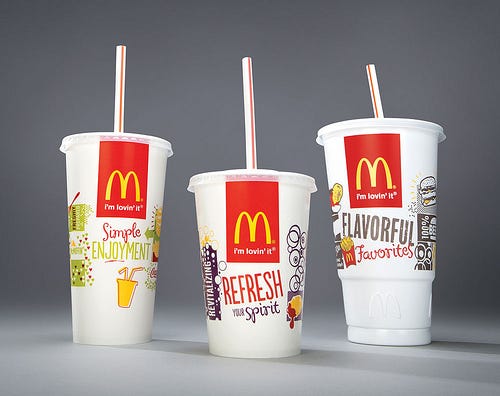 Bloomberg- McDonald’s Corp., reeling from an industrywide restaurant slump and slowing growth from its all-day breakfast push, is looking to beverages to help perk up the business. The world’s biggest food-service company, which last year focused its advertising on cheeseburgers and chicken sandwiches, plans to offer $1 sodas and $2 McCafe specialty drinks across the U.S. It’s turning to higher-margin beverages at a time when cheap grocery prices are prodding more Americans to eat at home. The drink promotion may also help McDonald’s cope with the eventual rebound in food costs.

McDonald’s has been revamping its menu and marketing since Steve Easterbrook took the helm almost two years ago. Along with the introduction of all-day breakfast, Easterbrook has relied more on discounts and promotions across the country. Last year, the chain advertised two-for-$2 and two-for-$5 deals to bring back diners they’d lost after nixing its popular Dollar Menu.

I have waxed poetic about McDonald’s a lot on this blog. They are undoubtedly still the king of fast food thanks to reputation, marketing, and the best fries the world has ever tasted. But if Fat Ron and company think that people are going to choose the Golden Arches over a bunch of better options because of cheap drinks, they better get their noggin checked and their resume updated.

Now when I say this, I mean no disrespect to two of the great drinks in the history of mankind: McDonald’s Coke and McDonald’s Orange Drink. Both are royalty in not only the fast food drink game, but the drink game in general. McDonald’s Coke can only be trumped by the taste of Santa Coke and Coke in a glass bottle, while Orange Drink at its absolute zenith is the GOAT. If they want to promote those two drinks as well as those Coca Cola Freestyle machines where you can make a million different combos even though the exact drink you want is ALWAYS out of syrup, they may have a chance. But the fact of the matter, nobody goes to a fast food joint for their cheap sodas or coffees. If McDonald’s wants to start stacking cash like they did during the Super Size Era, they should either charge $2 for all Shamrock Shakes, bring back the real Dollar Menu, or unveil the Monopoly game again. McDonald’s Monopoly cures all ailments except for diabetes.

P.S. Mayor Bloomberg must have been puking his guts out when he read about people loading up on sugar soda for $1 on his own website. I’m pretty sure his platform for his last election was about outlawing huge buckets of soda everywhere. Now McDonald’s is basically giving them away. Absolute kill shot for Bloomy.