Officer Frank Geisenhoffer in December was disciplined for his crude actions after Elizabeth Restrepo turned over the audio recordings to his superiors. The recordings were later obtained by News Channel 5.

Geisenhoffer was suspended for two weeks without pay and put on probation for a year following his indecent comments, according to documents detailing the officer’s reprimands. Geisenhoffer’s disciplinary action states that he conducted himself in a manner “unbecoming to a police officer and detrimental to the service.”

“I don’t do big girls,” the officer can heard saying in one of the recordings obtained by the news station. “Don’t have to — not with this d–k.”

I’m proud of the South Carthage, Tennessee police for being willing to take a brave stance and say that telling a store clerk that you don’t fuck fat chicks due to your big dick, asking for nudes and video of her touching herself, and ultimately showing her footage of you stroking your meaty johnson is “unbecoming to a police officer.” True heroism. But I’m going to say that he should probablyyyyyy not do that and continue being a police officer. I’ve never been a cop so I don’t really know all the nuances of the job. But it is probably difficult to both protect and serve the people when you’re walking around with a turgid erection and jamming it into a counter while trying to get people on your beat to fuck you until they’re so horrified that they film you for weeks on end and submit it to your superiors. That’s just me though, a real singularly minded guy who likes his cops doing mostly cop stuff on the clock and perhaps worrying less about the first showing of their tastefully crafted masturbation videos.

But there are two sides to every story and, according to the cop, he’s a victim in his own way:

Geisenhoffer, in a written statement, admitted to nearly everything, according to the report, though he did claim Restrepo led him on and sent him lewd pictures first — something Restrepo has denied.

Well hey, you don’t fire a cop with a dick like that, we all know that. Easy way to save on the nightstick budget. South Carthage, Tennessee just gets it.

PS Obviously I feel bad for this chick and horrified at the police here but this screengrab makes me laugh and I can’t help it: 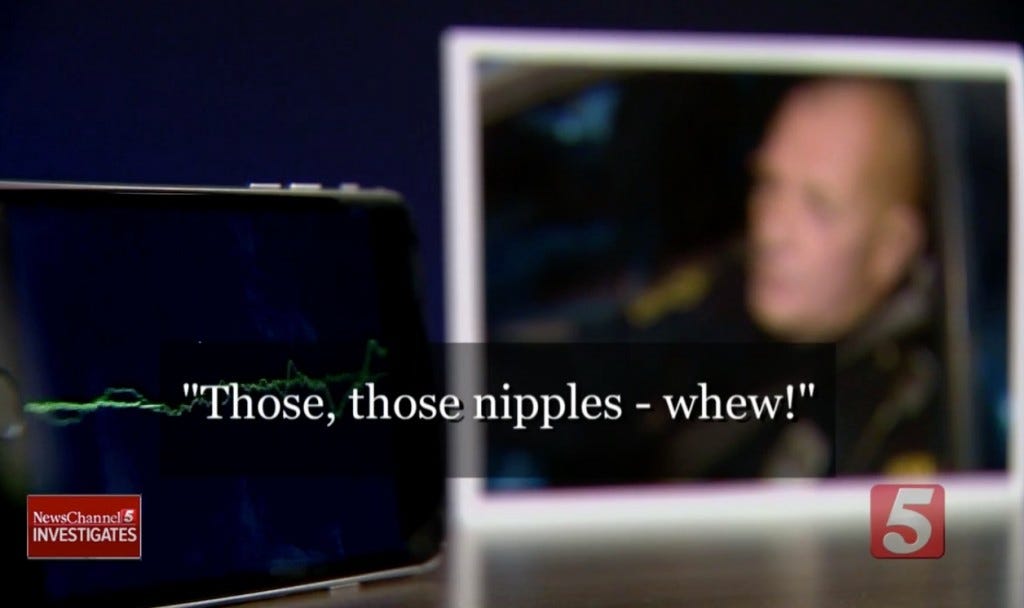