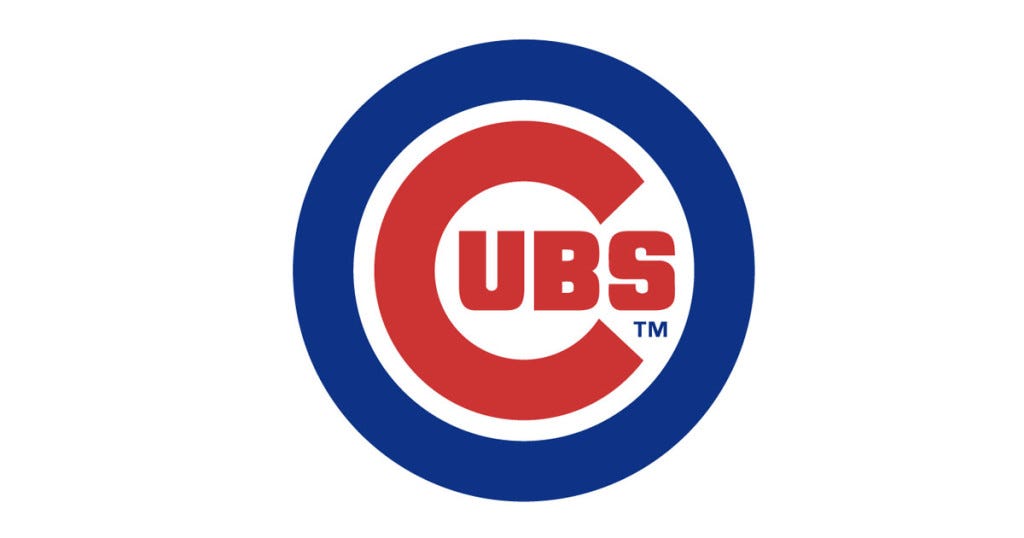 1. The offseason is much shorter when you win a World Series. That’s a fact no one really knew around here because it hadn’t happened in 108 years. By the time we cleaned up the confetti, the rest of baseball was 6 weeks deep into 2017. Now it’s already time for  spring training games. Jesus fucking christ where does the time go.

2. Miguel Montero and Joe Maddon had a nice spaghetti dinner.

Which is just fantastic because I hated the idea of Montero being the source of locker room beef. I think it’s easy to sympathize with his frustration in October… Maddon effectively benched him without notice. Key: without notice. But that’s still no excuse for Miggy to air his dirty laundry with the media. Miggy is too good of a teammate for that, so I’m extremely happy to see this in the past. Relevant story: I randomly hung out with Aaron Hill last season. 12 year MLB vet. Asked him who his favorite teammate was ALL TIME and he said Miggy and it wasn’t even close. You would have thought Montero saved his life on several occasions. Aaron Hill basically told me that not only was Montero the best teammate he ever had, he couldn’t even think of a second place because that’s how sweet Miggy is. So suck on that, Gossip. Montero and Maddon are gucci. Nailed it.

3. Dexter Fowler learns just how much st louis sucks. There’s really no better way to kick off 2017’s first News and Notes blog than to engage in some good old fashioned st louis cardinals bashing. And there’s really no better way to bash the cardinals then by simply letting their idiot fans do it themselves. Specifically, you have probably heard by now that Dexter Fowler “spoke out” against  PRESIDENT TRUMP’s travel-ban. Maybe you didn’t. Regardless, now you know… Dexter Fowler was asked over the weekend about the travel-ban. His wife emigrated from Iran and still has family overseas, so the question makes sense. What do you think about the ban, Dexter?

And while on topic, here’s a quick refresher on Fowler’s wife, Aliya, just because: 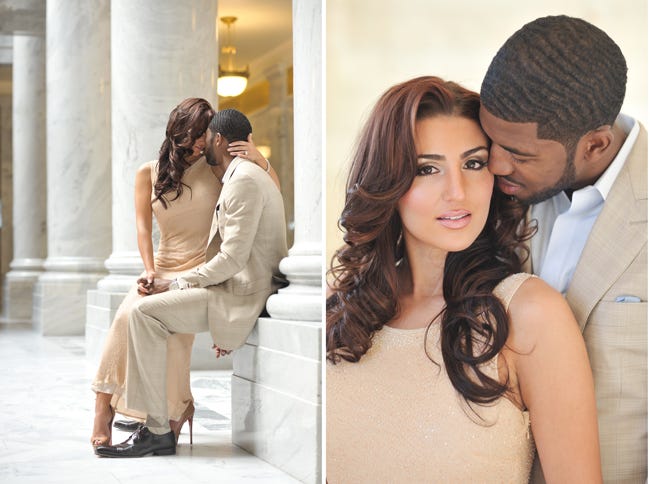 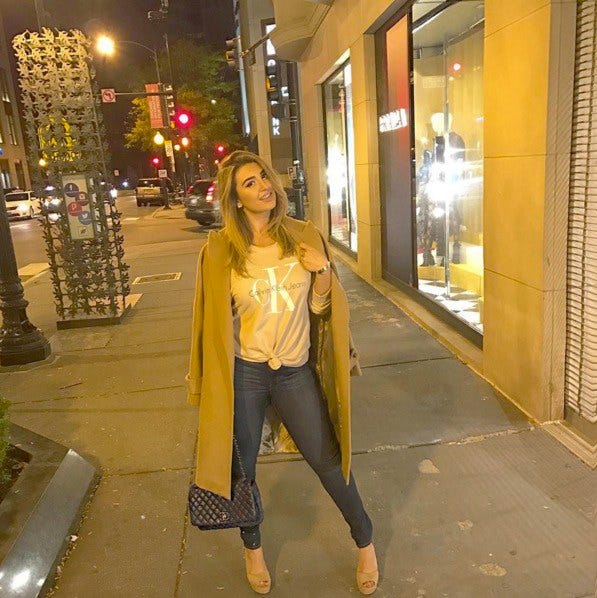 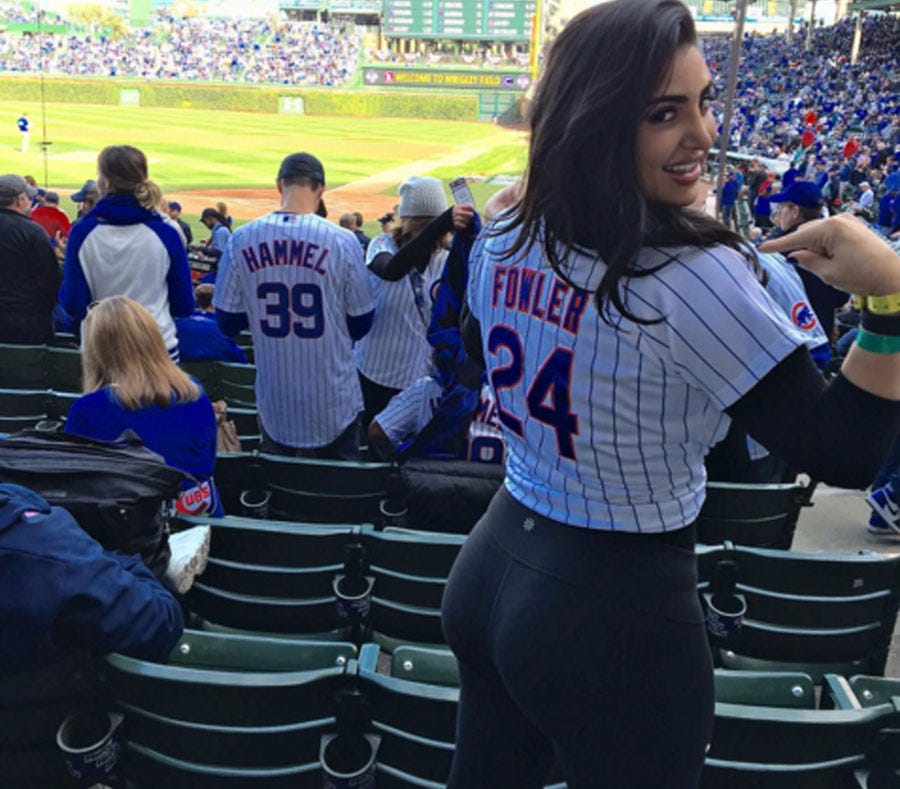 I don’t care what nationality/ethnicity/orientation drives your boners. That, my friends, is a goddamn woman. Speed. Comfort. The whole enchilada. So for obvious reasons, of course Dexter Fowler is going to side with his old lady on the whole blatantly racist executive order thing. 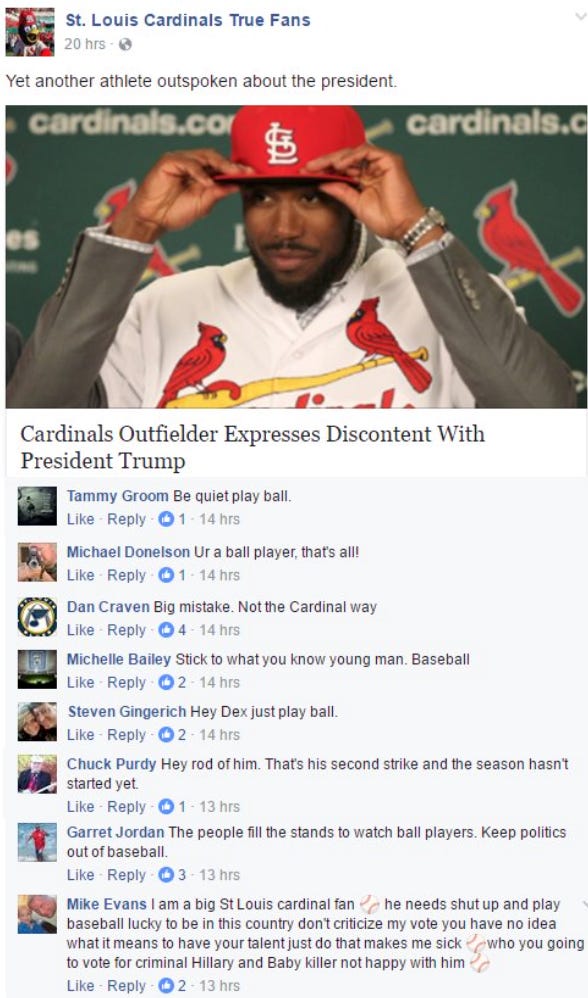 There are dozens of comments that could potentially make your head explode. I’ve packaged up the top 10, which might as well serve as a list of reasons why st louis is the worst sports town, and biggest shithole, on planet earth.

10. Bench the idiot – send him down to the minors. – Leo Sutcliffe

9. Maybe he should be counseled on appreciation for an American job, in an American Tradition! – Judy Wargin (Author’s Note: Hey Judy, if you happen to read this, go fuck yourself.)

8. … in st louis we’re all about our baseball. (insert baseball emoji) We’ve always had great, respectful players. I hope he doesn’t bring down our positive team with issues in his family. They always say don’t bring it to work, so hopefully that’s the last he’ll speak of it and let’s play Cardinal baseball. – Mary Chandler Bethel

7. Am I going to have to boycott baseball now, too? Keep your mouth shut and play the game. Or better yet, go play in Japan. – Michael Blake Hopkins

6. Yep lost my families respect… go back to Chicago you pussy – Bret Wesselschmidt

5. Play baseball in Iran. I’m sure they pay well in the land of the free over there. Your choice not mine. I choose the good USA where I know I have to work my ass off every day just to see my CARDINALS play the game I love and make player’s like you rich. Now I have to listen to you bitch about politics. I bet you wouldn’t want to trade places buddy – Ron Barron

4. Send him back to Mother country – Susan-Brad Murray

3. He can gonfuck himself. Fucking so over all the bs from black people over uneducated opinions Your making a shut ton. Gobfuck yourself and go back to the cubs. – Joel Bowman

2. Mr. Fowler, Jusr play the game of baseball, . Let me ask this Question:: Are you going to stand up when , they play the National Anthem on opening day , or kneel , like your buddy Kapernik. Dike. – Richard H Behler

Never mind cardinal fans’ perpetual self-promotion that they’re the best in sports. Never mind that the travel-ban does, in fact, reasonably impact Fowler’s family. And never mind that Fowler’s replacement is TOMMY FUCKING PHAM and his .226 batting average. None of that matters when you’re dealing with the most insufferable motherfuckers on the planet… the kind of people that chase prescription medicine with room temperature mountain dew. People that socialize at Taco Bell and listen to Nickelback on Pandora. People in American Eagle cargo shorts with a straight face and frosted tips. These are the kind of people that need to be sent head first into the bottom of the ocean. I fucking hate st louis.

4. The 2017 Opening Day roster is pretty much set at this point, which is a far cry from normal spring training operating procedure. I guess that’s what happens when you load your roster with young controllable talent and established long-term veterans? Or better said, maybe it’s  just a simple byproduct of having Theo & Co. at the ship’s helm. I’m not sure. All I know is that this Opening Day roster is fucking stacked:

“Remember when Kyle Schwarber missed an entire regular season, then came back in the World Series on a busted ACL  and took a steaming hot dump on the Indians?” – your subconscious, right now.

So obviously the next logical question is who fills the last position player spot? It’s been well documented that Maddon wants 13 pitchers to open the season and for good cause – it’s FAR better to have an extra arm than bat early in the year. You want the hitters getting as many reps as possible, and you want your bullpen to stay fresh. So 13 pitchers it is. That essentially means that the last roster spot is open to either Matt Szczur, Tommy La Stella, or light-hitting Japanese fundamental specialist, Munenori Kawasaki.

For obvious reasons, my money is on Szczur. Temper tantrums aside, La Stella is limited defensively, which matters when Kyle Schwarber is set to lead off and play left field every day. IN ADDITION TO THAT GOOD POINT, Javy’s emergence as the ultimate secret weapon essentially makes La Stella a luxury for now. And unfortunately for TLS, that luxury means living out of a Holiday Inn Express in Des Moines, Iowa to start the season. Again, temper tantrums aside. These are facts.