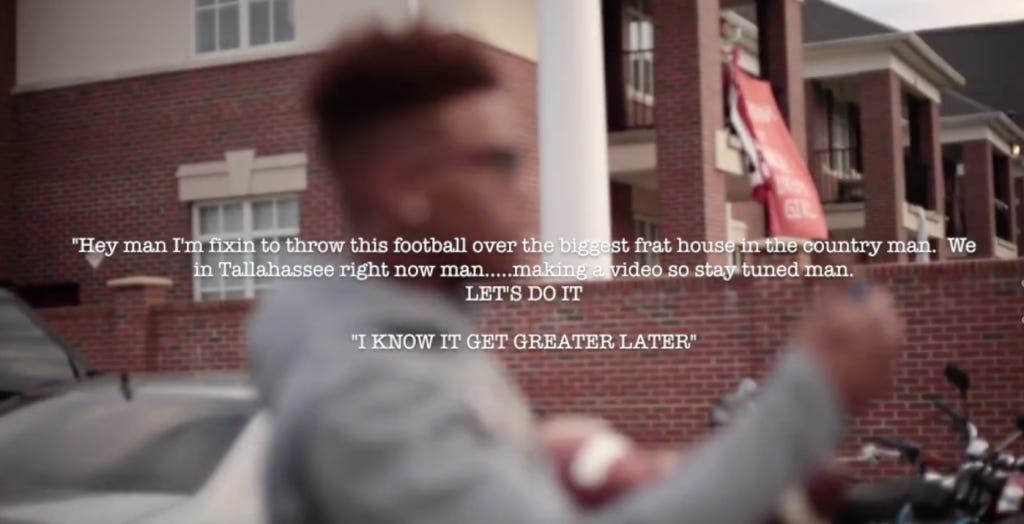 Throwing the ball over the PIKE house. Only done successfully two times before.

TALLAHASSEE — Many have tried to throw a football over the Pi Kappa Alpha fraternity house located just off the Florida State campus, but only Andrew Pope had succeeded.

Former FSU quarterbacks EJ Manuel and Christian Ponder, both now starters in the NFL, tried and failed. Current Seminole linebacker Ukeme Eligwe attempted to use his brute strength to hurl the ball over the towering house, but he came up short.

Jameis Winston tried it – and nailed it.

After Winston crushed home runs during a game of stickball in the Pike courtyard, someone issued the old challenge. Could Winston, FSU’s star redshirt freshman quarterback, throw the ball over the 35-foot tall peak of the house?

Challenge accepted. Winston added an extra five feet by launching the football from the edge of the yard.

“They told me that someone threw it over and I was like, `I got to throw it farther,'” Winston later recalled.

“He just launched it. It wasn’t even close,” said fraternity member Austin Barr, who recorded the throw on his phone. “I’ve never seen a ball thrown that far.”

Look at the 3 careers there, the subsequent results, and you tell me what kind of omen this is for Francois.

See you in the NFL bro.