FB - A dude in Illinois wanted to propose to his girlfriend, who happens to LOVE the chicken McNuggets at McDonald’s so much that she constantly tags him in Facebook posts relating to the nuggets, and would apparently even “completely die for chicken nuggets.” He told the Lincoln Courier that her love for nuggets was so deep that they simply “had to be somewhat in the mix of the proposal.”

After getting the blessing from his girlfriend’s parents, the guy went to a nearby McDonald’s early in the morning and asked for McNuggets. While he was initially denied his request because it was still breakfast hours, the entire staff got together, prepped the necessary equipment, and cooked a special order of 20 McNuggets once the manager learned that he wanted them for a wedding proposal.

After embedding a ring in one of the nuggets, the guy drove to his girlfriend’s to pop the question. While she was still a little groggy, he hand-delivered her the box of McNuggets. As she opened the box up, he got down on one knee and asked the question: 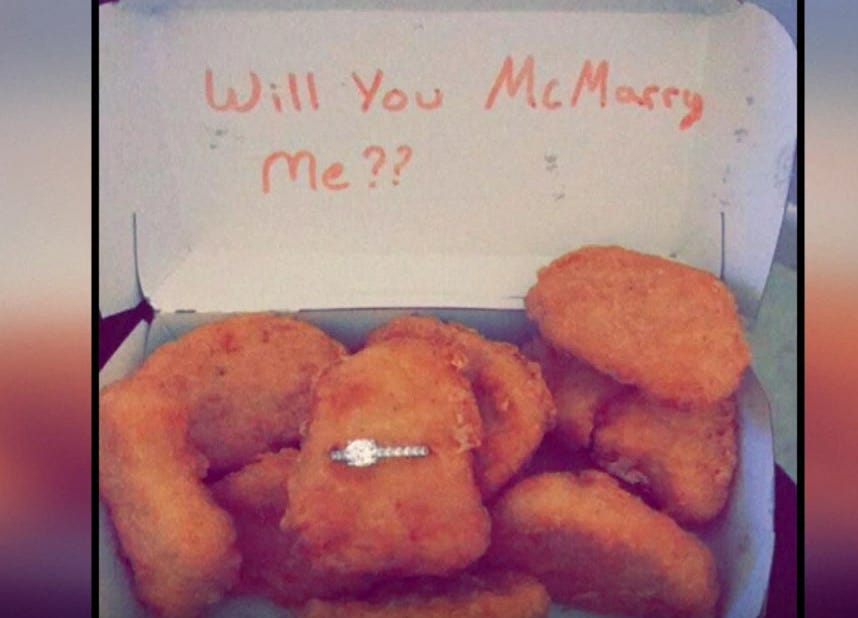 You know, life is hard. You have to wake up to go to work, you have to pay taxes, you have to listen to the I’m Happy song ad nauseam in every waiting room and grocery store you enter. All we really want in this life is a little bit of money to go on vacation with, and a down ass bitch who doesn’t mind touching your weiner every once in a while along for the ride. So shout out to these love birds for finding each other and making each other so happy. It’s not every day you find yourself a pretty lady who loves chicken mcnuggets so much that you literally put the ring inside of one to propose. That’s called a modern day love story, one which hasn’t been seen since Romeo and Juliet or Cory and Topanga.

Naysayers and haters, of which their are many, will say writing “Will You McMarry Me?” on the inside of the box is as white trash, hillbilly, and downright stupid as it comes, but those naysayers and haters are wrong. You don’t have to conform to societies rules. Just because your idea of romance doesn’t include deep fried pink slime, doesn’t mean it’s wrong.

And you know, at the end of the day, it was just nice to get an update on King Curtis. Glad he found his match in life.