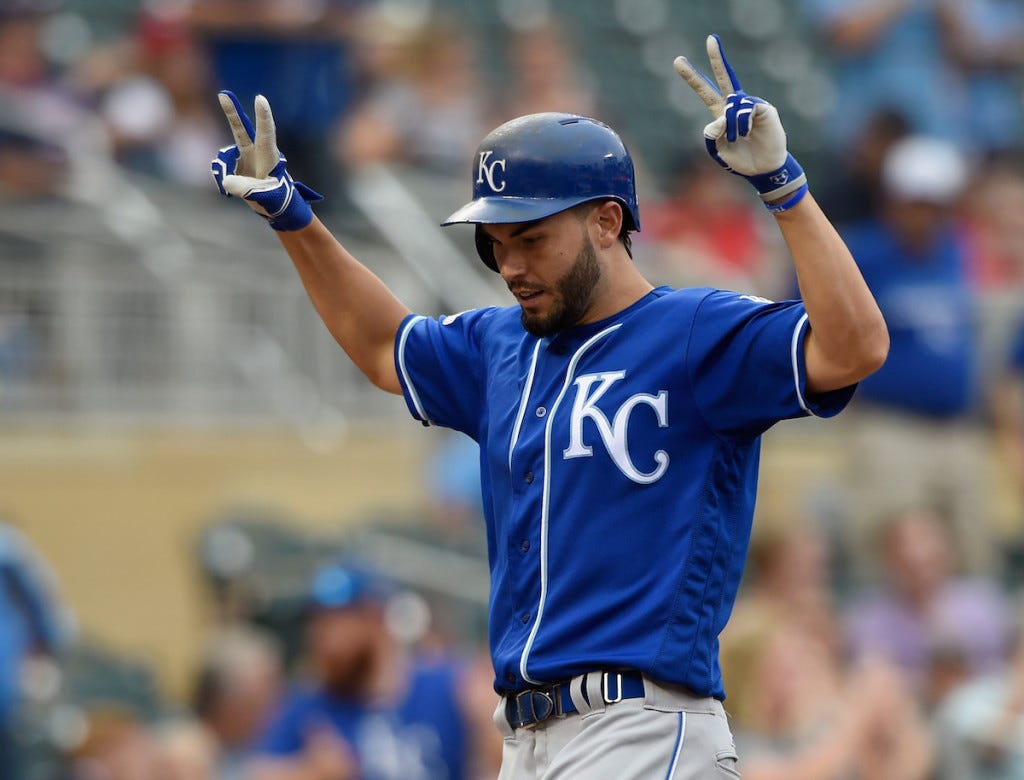 A major reason why the Kansas City Royals enjoyed great success in recent years, appearing in back-to-back World Series, including winning one in 2015, was because of their core group of players. That core might be disbanding after this year.

At the conclusion of the 2017 season, the Royals will have several key players enter free agency. Jarrod Dyson was one of them, but the Royals flipped him to the Seattle Mariners for right-handed pitcher Nate Karns last month. Even with one free agent-to-be no longer with the organization, the Royals still have several players on that list — Eric Hosmer, Mike Moustakas, Lorenzo Cain, and Alcides Escobar, all former All Stars (some more worthy than others), are set to become free agents at the end of the year.

I’m not gonna say that it’s impossible for the Royals to retain all four of them, but it’s highly, highly, highly unlikely that they keep all four. The most unlikely to return? It’s gotta be Hosmer, especially after hearing what the Royals are anticipating that he’ll be looking for on the free agent market, and also that he’s a Scott Boras client.

Hosmer isn’t nearly as accomplished offensively as either of those players was, but the Royals anticipate that he will seek a 10-year deal, knowing that a number of high-revenue clubs — including the Red Sox, Mets and Phillies — could seek a first baseman next off-season.

“We all know that Hos is a franchise player, a world champion. He’s done all this at a very young age,” Boras said. “And I don’t know how many people have told me that if a guy hits 25 home runs in Kansas City, he’s going to hit 35 somewhere else.

Scott Boras with an all-time Scott Boras line there. “Yeah, he’s a 25-homer guy (only hit 25 homers once (2016), averaged 15 HR over his first five seasons), but we’re talking about a 35-homer guy anywhere else.” I’m not trying to knock Hosmer, either, but gimme a fuckin’ break. He’s not a 35 home run guy. He’s not a home run guy period, really. Last year, like I said, he hit a career high 25 home runs, but his OPS actually dropped 61 points from the year before when he hit 18 homers. And all due respect to Hosmer — I agree that he’s a “franchise player” in Kansas City, but he’s a nice, complementary player on a big market team somewhere else.

Hosmer’s a good, doubles hitter who can hit for average and drive in runs, a Gold Glove first baseman, who gets on base at a slightly above average clip, and has a slightly above average OPS. Good player, not a great player. Regardless, I’m sure plenty of teams would absolutely love to have him. And with Boras in his corner, he’ll get paid big time. But after seeing some of these 10-year deals that have been handed out over the past few years, it would seem ill-advised to be the next in line to draft one up.

Albert Pujols, in my opinion, has the worst contract in baseball. It’s different, because he signed his before his age-32 season, and Hosmer would be signing his before his age-28 season, but still. Prince Fielder, that contract ended up being a disaster, too, but mostly for health reasons that I think it’s fair to say Hosmer will not also be susceptible to. Then you have Joey Votto’s deal, the one that Reds broadcaster Marty Brennaman lost his shit over last month, which is still somewhat justifiable at this point, but we might feel differently when he’s getting paid $25 million in 2023 as a 39-year-old. Most 10-year pacts don’t end up looking great at the end.

Hosmer also mentioned that he has no desire to negotiate an extension with the Royals past Opening Day, which is pretty common amongst players entering their free agent season. As we know, it’s quite a long shot to get a Boras client to sign an extension, anyway. Has it happened before? Yes, but it’s rare. Stephen Strasburg is the most recent example, but hometown discounts do not exist in the world of Boras clients, so if Hosmer will be looking for a 10-year deal on the free agent market, then he’ll be looking for a 10-year deal from the Royals, and I just can’t see that happening.

To their credit, the Royals have made a valiant effort to keep this group together, re-signing Alex Gordon to a 4-year, $72 million deal last winter, but it’s going to take a miracle to keep all four, if any — Hosmer, Moose, Cain, and Escobar — beyond this year. It’ll be interesting to see how Royals general manager Dayton Moore approaches this. I think they keep at least one, but I’ll be shocked, and really impressed, if it’s Hosmer.