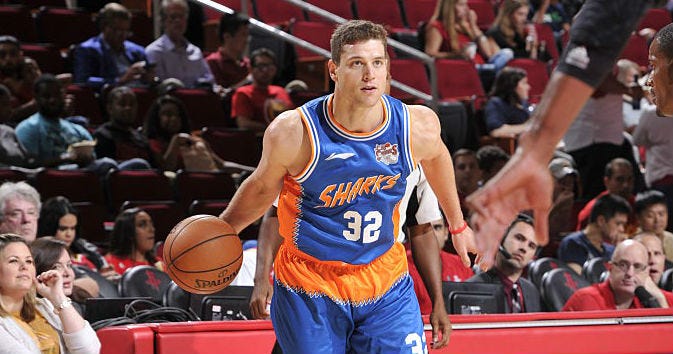 Ancient Chinese Legend spoke of a “Great White Shark” that would one day lead the Shanghai Sharks back to the glory days of 2001, when Yao Ming helped them bring home a national championship. I always thought that was a bunch of racially charged bullshit that I concocted in my head literally seconds ago, but now I’m not so sure. Since former BYU Star Jimmer Fredette joined the Chinese Basketball Association’s Shanghai Sharks back in August, he has been averaging 36 plus points a game and  the Sharks are 29-6 headed into the playoffs. Last night he dropped a cool, calm, and collect 73 points and shows no signs of slowing down. (the sharks somehow still lost the game in double OT but we’ll conveniently ignore that for the sake of the blog)

I know a lot of you are probably thinking, “relax guy, he’s playing in China, Brian Scalabrine would probably be putting up triple doubles every other game as well”. But hey, tell that to Gilbert Arenas, who only managed to lead the Sharks to a pathetic record of 10-22, or Delonte West, who averaged only 12.5 points a game for the Sharks and was cut after two weeks. Playing in China ain’t always sunshine and rainbows. In fact, most of the time it’s smog clouds with a side of cigarette smoke. And by the grace of Jesus Christ and the Latter Day Saints, Jimmer seems to be adapting to that just fine. #lessssgooooshaaaarrrkkkkss

P.S. I’m gonna be releasing a bunch of Shanghai Sharks related video content over the next few weeks. If you think that sounds boring you clearly aren’t familiar with how much of an electric circus the CBA can be. If I do my job correctly I hope to have a bunch of Stoolies lining up to join me as devout members of #sharknation.