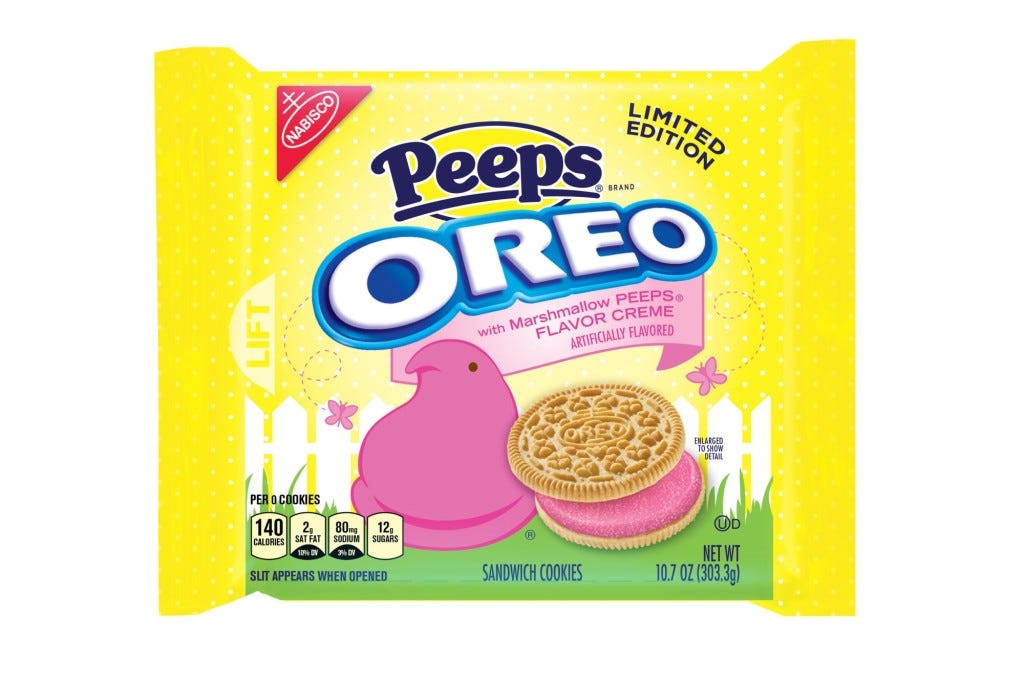 People- Just when you thought you couldn’t love Peeps anymore than you already do, Oreo goes and turns them into a cookie. The limited-edition cookies inspired by the iconic Easter candies were first spotted on Walmart.com and will be available in Walmart stores starting Feb. 22 — but a representative for Oreo tells PEOPLE the new exciting flavor is also already available nationally in a variety of grocery stores. The latest creation to pop out of the Oreo Wonder Vault is made up of two golden cookies and bright pink marshmallow Peeps-flavored creme covered in sugar. They retail for $4.49 per package.

I’m pretty sure I have made my stance on both of these products pretty clear when this unholy union was announced it October. But in case I wasn’t clear, this is what I think of them. Oreo is America to a tee. Started from the bottom now they are the king of the castle. Once Double Stuf came out, the cookie game was a wrap. Chips Ahoy better enjoy the view of Oreos nuts from second place in the cookie pack, because that shit ain’t changing for a long, long time.

Peeps are the opposite. They are a trash food that only trash people like and should only be sold in trash stores like Walmart. The only reason they have been allowed to thrive is because pastels rule the world during Easter season and Peeps got such a large lead before other great Easter candies like Starburst jellybeans were invented. The clucking Cadbury bunny could only hold off that evil so much with it’s glorious chocolate. Peeps are the candy corn of Easter. But now that Peeps are moving in on an American classic is a real concern. We need The Donald to do the right thing and veto the fuck out of this tomfoolery. Saving beloved snacks is how you get Americans back on your side. I guarantee he will rise at least 10 points in the polls and not one member from the other 2 branches in the U.S. government will try to stop him.