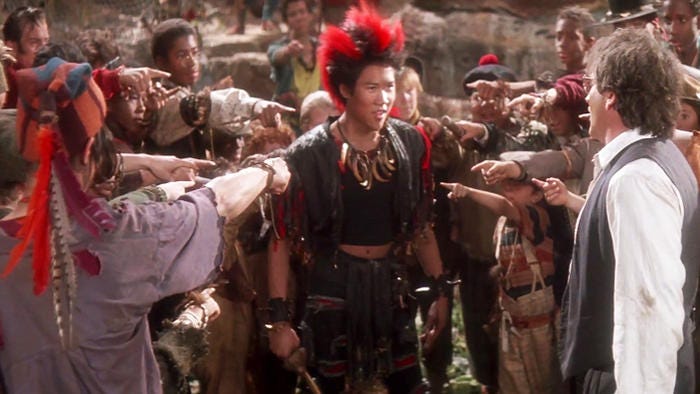 EW- The story of Peter Pan has been told many times, but Hook star Dante Basco thinks another Lost Boy should get his chance to shine. The actor, who starred as Rufio in the Steven Spielberg-directed film in 1992, has opened a Kickstarter campaign for a prequel about his character, the mohawked leader of the Lost Boys who challenges Robin Williams’ Pan when he returns to Neverland. Basco and his group are seeking $30,000 to make the short film Bangarang, which will tell the story of an orphaned Rufio — originally named Roofus — before he came to Neverland.

First of all let me just say that I respect the hell out of the hustle of Dante Basco. When you have an IMDB page that is chock full of projects but I only know you as Rufio and the guy that made Turtle’s sneakers in Entourage, you need to get every dollar out of that Rufio role.

Now listen, I love the movie Hook. It’s definitely in my Top 50 and is one of the best flip back movies when you are watching TV. Which is why I know this is going to be an unpopular opinion, but I am going on record on saying that this movie can kick rocks. You know why? Because I HAAAAATED that two-toned zebra-headed, slime-coated, pimple-farmin’ paramecium brain, munchin’ on your own mucus, suffering from Peter Pan envy motherfucker. Team Pan for life. Rufio would have slit Peter Pan’s throat 100 times while Pan was trying to rediscover his mojo. When Rufio drew that line in the sand, I was staunchly on Pan’s side of it and would rather spend the rest of my life in the Boo Box than sell out. Plus if Rufio was such a good leader, how the fuck did he get killed? It’s basically impossible to get killed as a Lost Boy. In fact I’m pretty sure Rufio was the first and last Lost Boy ever killed in Neverland. Dude was weak as fuck and nobody would have liked him if he didn’t have a weird name, that outrageous haircut and let out a slightly above average Bangarang. If you told me that Rufio was plotting a violent coup d’etat to overthrow Pan after The Great Pirate War was complete, I would believe you.

Now if you will excuse me, I have to watch one of the best scenes in cinematic history.

P.S. Glen Close being the Boo Box pirate will always blow my mind.

And David Crosby too