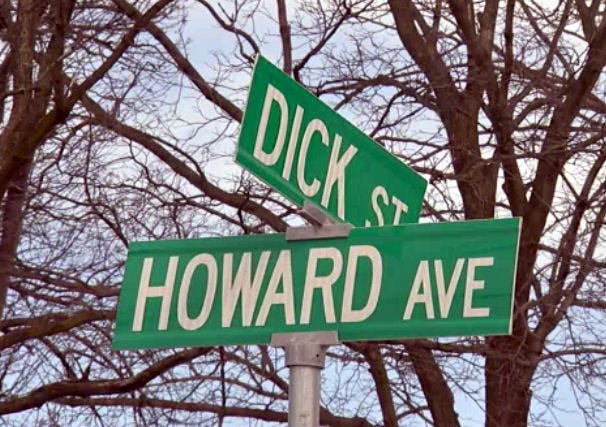 NBC – Neighbors living on a particular stretch of a New Jersey road are struggling with the idea of changing the name of their street to make it less confusing.

The road in Clifton stretches only about three blocks; one part is called Ellsworth Street, but once a person crosses Howard Street, the rest of the road is Dick Street. City leaders have proposed changing the name of Ellsworth Street to Dick Street to make it easier to find in an emergency. But living on a street that’s the butt of jokes isn’t what Kenneth Roman wants.

“People laugh when they think of Dick Street,” said Roman, who lives on Ellsworth Avenue. “It’s not exactly a good name for a street. They can name it anything they want except for Dick Street.”

You know what they say. When it snows, you don’t plow Dick Street. Dick Street plows you.

Listen. I’m not gonna act like I’m some sort of real estate wiz like everybody from 2004-2007 did. However, I do know that the #1 motto to live by in the biz is “location, location, location”. And if you have a house up for sale on Dick Street, that bad boy isn’t staying on the market for long. I’d take a shack on Dick St. over a palace on Nantucket any day of the week. Why? Well because there’s a certain amount of prestige that comes with living on Dick St. There’s a certain je ne sais quoi that comes when you ask a girl at the bar if she wants you to take her ass back to Dick Street and it’s actually a factual statement and not just some creepy pick up line. Sure, some people may laugh and scoff at the idea of “Dick Street” but those people are children. They are mental midgets who are incapable of comprehending the power and illustrious allure that comes with owning property on Dick Street.

Now imagine owning the biggest house on Dick Street. You’ve got the biggest Dick in town. Uhhhh ya think that carries a little weight re: your social status in the community? No doy. Because all life is, is one big dick measuring contest. From the day your born to the day you die, life is a dick-off (we’re not talking about baby dicks here, people. You must have the wrong website). So tell Carl who lives on 429 Spooner Street to shove that spoon up his ass. And while he’s at it, you’ve got 69 Dick Street to shove up there as well because you’ve got the hardest house on the block.