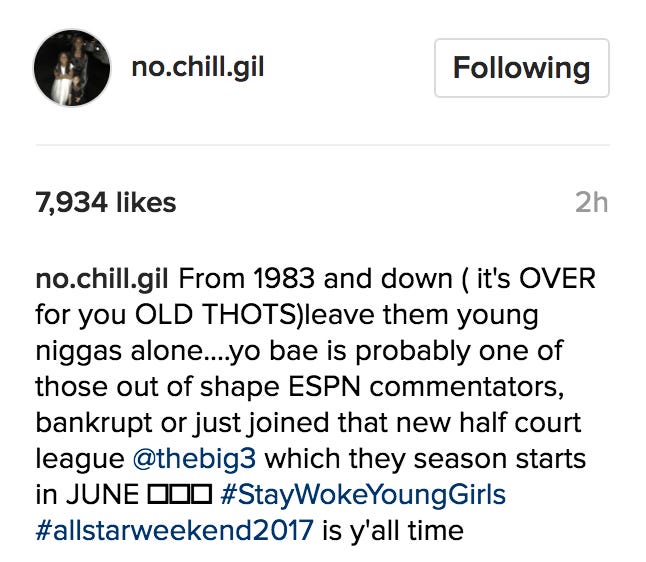 Trolling the people of Flint because they are dirty water

And so on and so forth. Very funny guy, and little/a lot crazy. I guess we knew this when he was pooping in his teammate’s shoes and was a split second away from shooting up the locker room, but that’s neither here nor there.

Despite all of this, Gilbert makes a good point here. All the old thots should stay away from All Star Game weekend. There are definitely the same thots that go to all these events to fuck the basketball players, and it gets kind of sad when you’re back for your 10th season. You’re like Mickey Rourke in “The Wrestler”, just washed up and past your prime and everyone feels kinda sad for you. Know when your thot time has come to an end. Move on to fucking bartenders on cruises and let the new generation of hoes get their shine. You fucked Kobe, let them fuck Durant. You fucked Shaq, let them fuck AD.

And he makes the best point of all…if you still need that basketball dick, the 3 on 3 league starts in June. The old guys will always take a layup hoe when they can get it. But let the new blood fuck the current all stars, gotta keep the circle of life in tact.