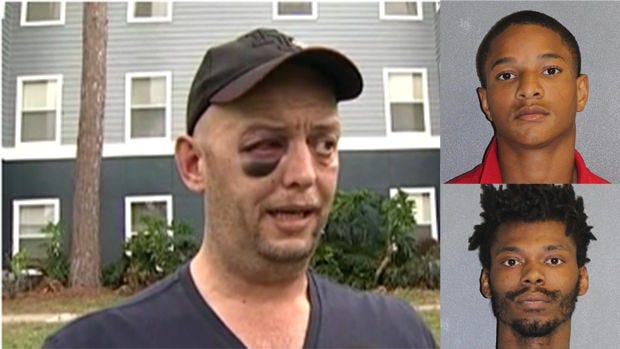 MySuncoast- Authorities say they’ve arrested three young men after they beat up a disabled Navy veteran who told them to stop torturing a turtle at a central Florida apartment complex.

An arrest report says the suspects punched Blough and then kicked him while he was on the ground. Paramedics said Blough suffered shattered skull and facial bones, a concussion and a severely injured eye.

Daytona Beach police arrested the suspects and charged them with aggravated battery and animal cruelty.

Well this is just a terrible story. I almost didn’t want to cover it, but then I remembered that my job is to present you guys with the good news AND the bad (especially the bad). Through thick and thin, blood and guts, murder and kidnapping, I will give you the stories no matter what. So let’s dive into this thicket of misery.

Three dickheads were torturing a turtle. Everybody loves turtles. They’re the backpackers of the animal kingdom, just carrying their house around with them everywhere they go. They move diligently and purposefully and certain species can live for ages. So, massive strike against these guys for playing spikeball with this poor turtle.

Along comes a hero- Navy veteran Gary Blough. He tells the ruffians to stop, so they beat the shit out of him. If there was any question about their eligibility for hell, they put that to rest. Just a first class ticket on the express train to the fiery depths of inferno. Guy survived an explosion in the Gulf War, lives a quiet life in Daytona Beach, and finds himself in the hospital because he tried to stop some turtle bashers. What is this world coming to?

Despite his wounds, which he said follows recent kidney surgery and metal plates and rods being put in his body, he expressed no regrets for getting involved.

“Don’t hit a woman, a child or an animal in front of me,” he told the Daytona Beach News-Journal. “I won’t stand for it.”

You’re goddamned right Gary Blough won’t stand for it. And I won’t stand for it either. If you hit a woman, a child, or an animal in front of me, I will surreptitiously take a picture and blog your shitty face for the world to see. Shame!