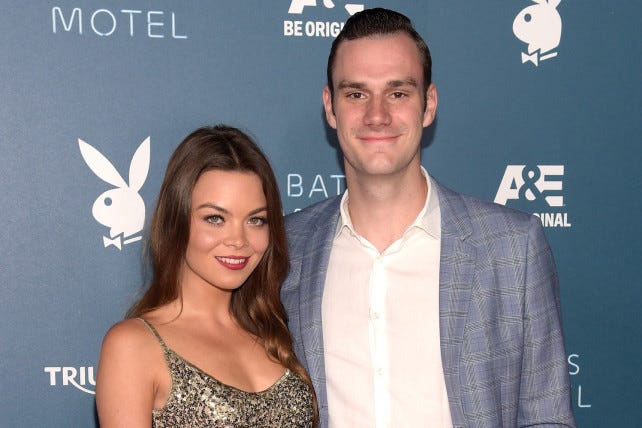 NY Post- Cooper Hefner‘s fiancée is posing for Playboy. Scarlett Byrne, the 26-year-old who appeared in the final three “Harry Potter” films, is showing some skin in the March/April issue. Posting on her Instagram on Valentine ’s Day, she shared a black and white photo from the shoot where she is wrapped in a sheet. She wrote, “I’m very proud to be a part of the March/April issue of Playboy. I penned a short essay along with my pictorial titled, ‘The Feminist Mystique.’ A big thank you to @Playboy, the creative team, and @cooperbhefner for such a unique opportunity. #NakedIsNormal.”

Playboy couldn’t be any more back. Hef is back. Cooper Hefner is back. Scarlett Byrne is back. Maybe even Kendra Wilkinson will be back. Everyone’s back! As you already know, Playboy is back in the nudity game and they’re coming in hot with Hef’s soon-to-be daughter-in-law getting featured in the first issue.

But even bigger news, she’s the chick from the Harry Potter movies. No, not Hermoine, life isn’t that fair to us. This chick:

A Slytherin, so you know she’s a bad bitch. And she clearly knows what she’s doing as she’s hitting us with that fire gram tease featuring a casual look back at it to go along with an ass shot once you pan down. Getting me real excited for this issue to drop.

And big ups to Cooper Hefner pawning off his fianceé for the greater good! That’s something a team guy does. Basically the Mark Messier of the pornographic magazine game after pulling off something like this. It’s getting more and more clear to me everyday that Hef is immortal, but if that immortality ever runs out I’m glad Cooper will be the heir to this throne.