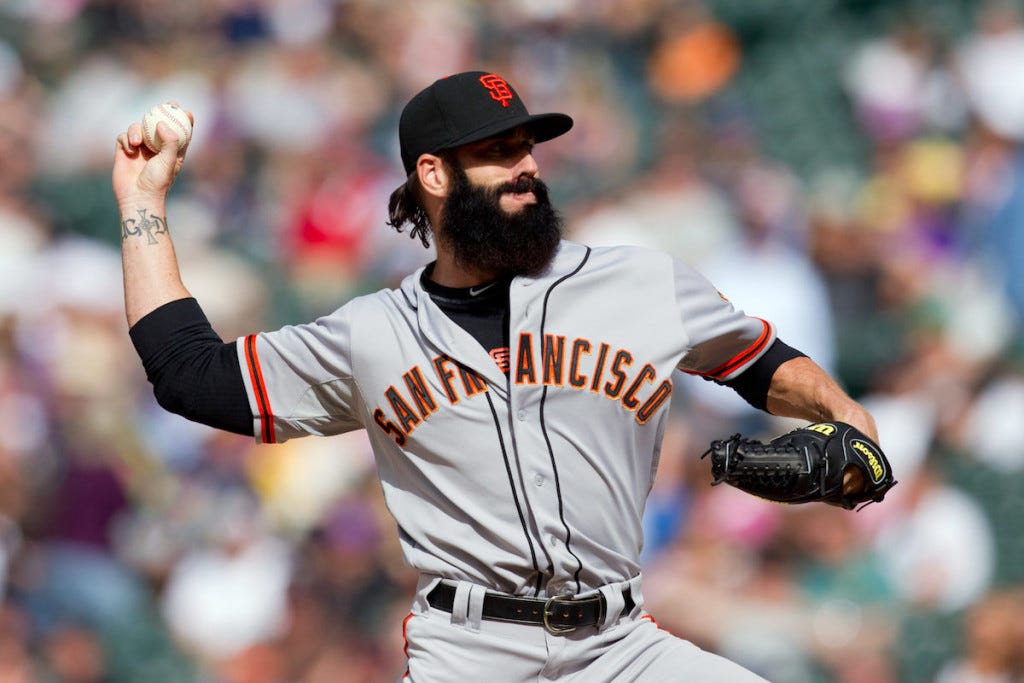 These were the good ol’ days. See, that’s the frustrating aspect to the life of a major league closer. Not everybody is Mariano Rivera. Actually, nobody is. Nobody ever will be.

I mean that in the sense that it’s very, very rare to see a pitcher who can keep the closer’s job for a majority of their career. These guys come and go. Their peaks, for the most part, are somewhat short, and they’re relatively easy to replace year in and year out. When one closer fails, there’s another young stud who can throw gas ready to step in and give it a shot. But the best of the best when it comes to closers — they’re all crazy as fuck, much like Brian Wilson. I think he takes the cake in terms of psychotic major league closers.

Did his shtick get old after a while? For sure. Once MLB caught wind of one of their top stars actually having a personality that didn’t bore everyone to tears, they marketed the shit out of him, and drove the whole act right into the ground. It’s not Wilson’s fault. Just kinda happens. But when we think of Brian Wilson, we obviously think of the beard, the antics, and the World Series title in 2010, a year in which he led the National League with 48 saves, and then slammed the door shut for the final out of the World Series in Texas.

He was on top of the world after that. Appearances on late night talk shows, featured in commercials, video games, the whole deal. In 2011, he saved 36 games. He’s saved a grand total of two games in the five seasons since, was released by the Dodgers prior to the 2015 season, and hasn’t toed a major league rubber since 2014. Now, he’s attempting to make a comeback at the age of 34 as a knuckleball pitcher, and the Tampa Bay Rays are interested in bringing him in on a minor league deal. What have they got to lose? The Rays have nothing to lose. Wilson, though? He has a career as a major league pitcher to lose.

It sucks, because prior to that 2010 season, Wilson’s only injury history consisted of a strained oblique way back in 2006. Immediately after that championship season in 2010, the injuries started to pile up. A rib injury, oblique injury, back injury, and a right elbow injury, all in 2011. That’s when the elbow issues started, and they would continue in 2012, landing him on the 60-day disabled list, a season in which he’d appear in just two games, and that was the beginning of the end. With the Dodgers in 2013, Wilson went under the knife to repair his elbow, and he was never able to return to being the pitcher that he was in San Francisco.

So, I guess this is the path that he has chosen to get back to the majors. Often times, we see failed position players try the knuckleball pitcher route to keep their hopes of staying in the majors alive, but I suppose it’s also worth a shot for pitchers with a history of elbow problems who can’t light up the radar gun anymore. Me personally, I’m rooting for the guy, if only because the game needs more personalities like him. Not that he’d be in a major spotlight if he makes it back to the big leagues in friggin’ Tampa, though.