YouTube/To Catch A Cheater – We had our decoy call the Plumber Boyfriend, said she found his business number online – and that her Kitchen sink stopped working (we just turned off the bottom! lol) … we had her dress in some sexy lingerie, and really throw herself on this dude…Every Plumber’s fantasy! Let’s see if it’s his as well

Obviously with any YouTube channel you’ve got to take it with a grain of salt that this is on the up and up, those wiley pranksters over there have made that clear. But this To Catch A Cheater thing has some extremely believable components, right down to the guy having his eyes blurred out because he didn’t sign a waiver. 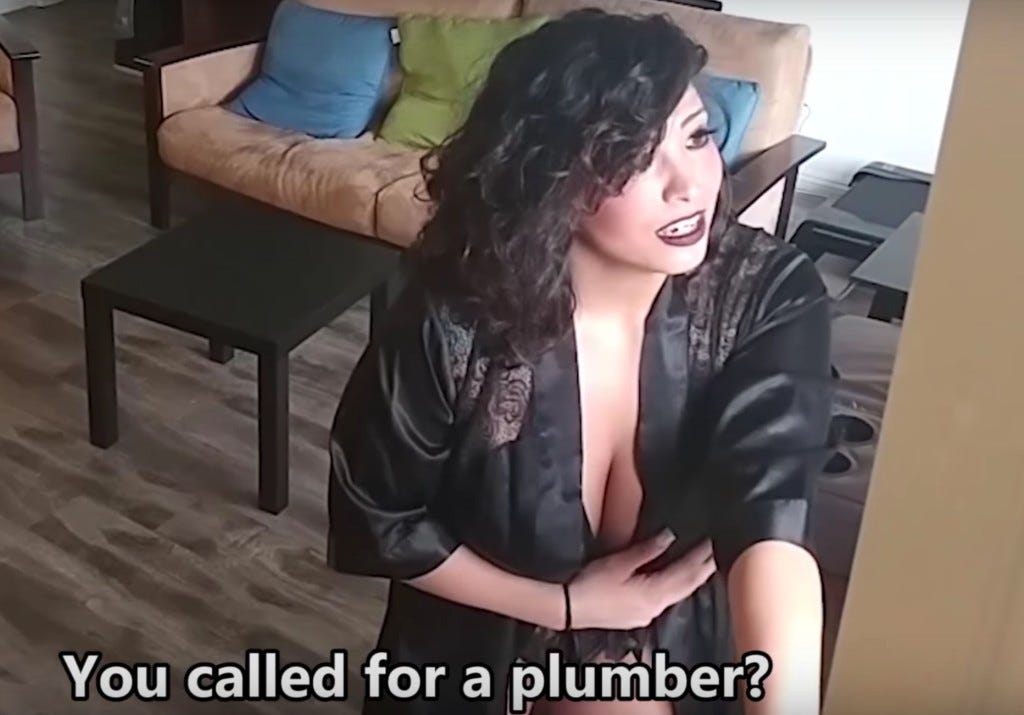 But how do you not even get tempted for a single second? Like maybe it seems to be good to be true, maybe you’re worried some dude is going to come out of the closet to stab and rob you in that order…but not even a thought of “Fuck it man, I’m laying it all on the line to live out this real life porn situation.” I mean if you’re a plumber or a pizza guy or a doctor with a female patient who doesn’t get that her vagina isn’t connected to other physical ailments, you pretty much owe it to the entire community of people like you to fuck this girl. And this guy still didn’t blink, much happier to go home with a clean conscience and his evil much less attractive girlfriend unknowingly watching this all from afar waiting for him. He’s a real stand up dude, I’ll give him that.

Still, this is completely an evil evil Youtube channel. This guy came out clean but there are other dudes I’m sure who would not be as lucky. And then at the end you blow up your relationship and, since these girls are not actually hookers, don’t even get a load off at the end to balance it out. That’s some 2017 Hitler shit. Be a human, at least take the guy to a yanky cranky shop on the house once you get enough footage ruining his life. Fair is fair.