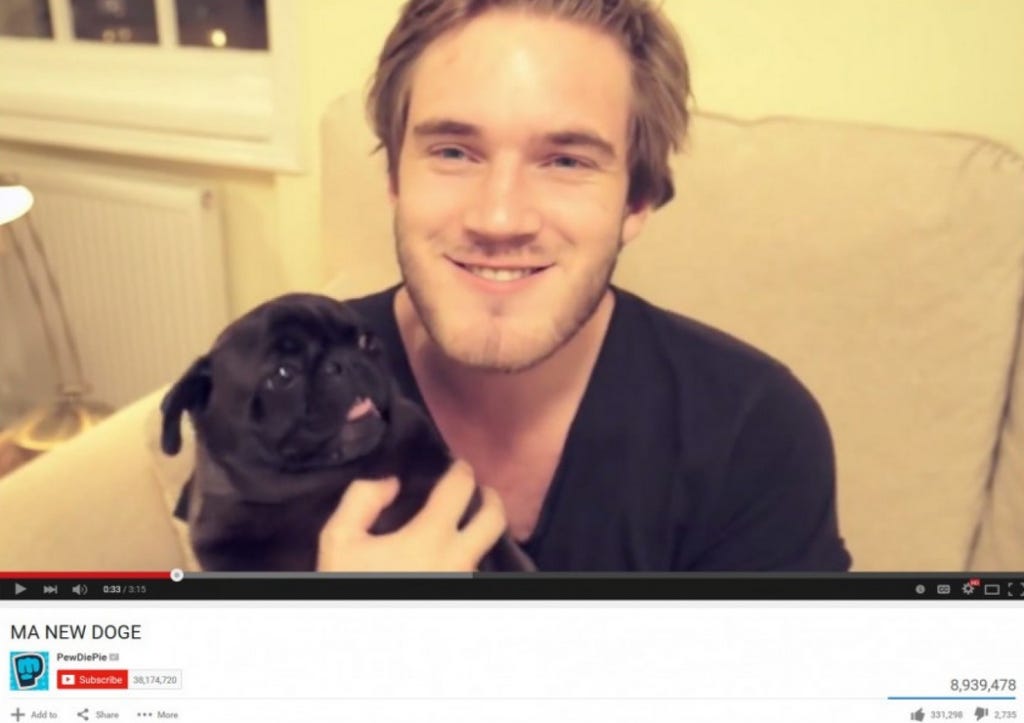 (Source) – In the YouTube clip, a pair of South Asian men wearing costume loincloths held up a banner that read, “DEATH TO ALL JEWS.” They danced and laughed, while in a separate screen the YouTuber named Felix Kjellberg (also known by his stage name PewDiePie) covered his mouth with his hands. “I don’t feel too proud of this, I’m not going to lie,” Kjellberg said in the Jan. 11 video, which had been viewed more than 6 million times before its removal. Kjellberg, a 27-year-old Swedish comedian, had paid the men to hold up the sign. “I’m not anti-Semitic or whatever it’s called,” he said as he watched. “It was a funny meme, and I didn’t think it would work.” Kjellberg is the most popular YouTube star on the planet. His videos have been viewed collectively more than 14 billion times. With such a massive audience came lucrative advertising and business deals, working with YouTube and the Walt Disney Co. That was, until this week, when both YouTube and Disney ended their business ties with one of their most famous personalities. Kjellberg “showed a clip from a Hitler speech in a Sept. 24 video criticizing a YouTube policy, posted swastikas drawn by his fans on Oct. 15 and watched a Hitler video in a brown military uniform to conclude a Dec. 8 video,” the Journal reported. The newspaper also noted that he played the Nazi Party anthem in a Jan. 14 video before he bowed “to swastika in a mock resurrection ritual”; in a Feb. 5 video, Kjellberg gave a “very brief Nazi salute with a Hitler voice-over saying ‘Sieg Heil’ and the text ‘Nazi Confirmed.’ ”

It’s not talked about enough how YouTube is such a weird, fucked up world that no one has ever heard of their stars. I mean who the fuck is this dude? He’s got 50 million subscribers, 14 BILLION views, makes millions of dollars per year and, guess what, he could come shit in my living room and I’d have no idea what to tell the cops. “I don’t know officer, pretty nondescript white dude. That’s all I got, I’m sorry.” It’s such its own planet that I literally spend my life on the internet and I’ve never heard of this dude and his videos get viewers like an NFL game. It’s crazy.

But I guess too bad for Felix Kjellberg? Guy had life by the balls and slipped up once. Just one time glorified dudes holding up a “DEATH TO ALL JEWS” sign. Then there was that other with the Hitler speech. And yeah, he also had all his fans draw Swastikas. Sure, the Nazi party anthem and bowing to a swastika in a mock resurrection trial thing right before the very brief Nazi salute with a Hitler voice-over saying “Sieg Heil.” But that was it. Aside from that? Seems like a totally normal dude who didn’t deserve to lose his job simply because he was pretty clearly a Nazi. Wish him all the best in this Zionist world. At the end of the day you can choose money or your principles, when your principles are DEATH TO ALL JEWS then there’s really no choice at all.

PS – How bout this dagger from his mom? Admits she has no idea what makes his stuff funny. Me and Kjellberg might be brothers.

A Jan. 10 video, for instance, showed Kjellberg and another twenty-something man slicing open a Furby with a hot knife before they incinerated the toy with small blowtorches. Kjellberg’s mother, as The Washington Post noted in September, has gone on record as not being able to identify what made her son’s work comical.