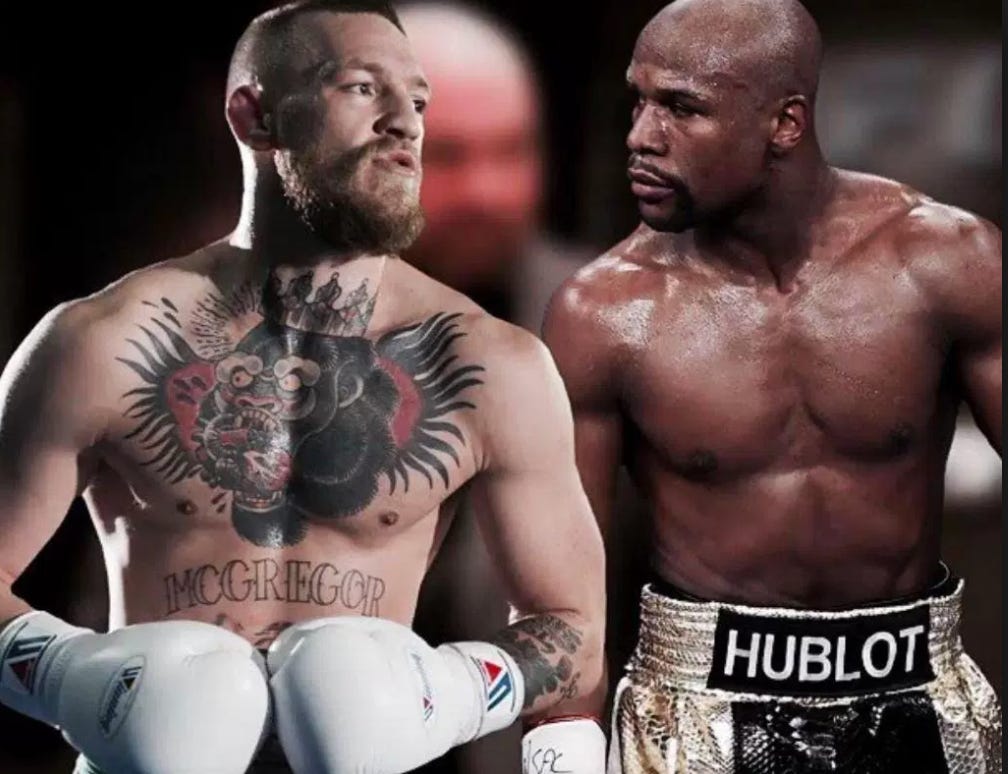 WaPo - Over months of verbal sparring between Conor McGregor and Floyd Mayweather, it became increasingly apparent that a mega-fight between the two wasn’t a mere vehicle for trash talk, but an event that might actually take place. Monday brought news that the two combat-sports superstars have, in fact, agreed to terms on a meeting in the ring.

The Irish Sun cited a source close to McGregor who told the newspaper that the UFC lightweight champion and Mayweather “have both settled on their respective fees.” The source added, “The contract hasn’t officially been signed yet because of a third-party holdup, but all the details have all been agreed on.

“The fight could even be announced within two weeks.”

That “third-party holdup” could be UFC President Dana White, whose company has McGregor under contract and who has repeatedly thrown cold water on the proposed fight. In January, White said that the chances of the showdown taking place were about the same as him “being the backup quarterback for [Tom] Brady” in the Super Bowl.

Hey Dana, BOOOOOOOOOO. BOOOOOOOOOOOOOOOO. Just let it happen. We can only have these guys trash talk and subtweet each other so much. Sure Floyd is going to win. And sure it will probably be scripted and Floyd and Conor will then go out to the club together and laugh hard about how everyone who paid for the fight is a sucker…but still, just let it happen. There are millions upon millions of people who don’t think everything in the fighting/boxing world is scripted who really want to see this go down. Conor is training

And maybe if they schedule it for 2019…he can possibly, sorta put up a fight against an aging Mayweather? Maybe?

Otherwise we’ll have to put up with another 2 years of Floyd throwing around billions of dollars on Instagram buying rare albino tigers, and Conor doing his Vinnie Mac walk, with no pay off. Just wet Dana’s break a little, let the fight go down, let everyone make their zillions, and then everyone will be happy.