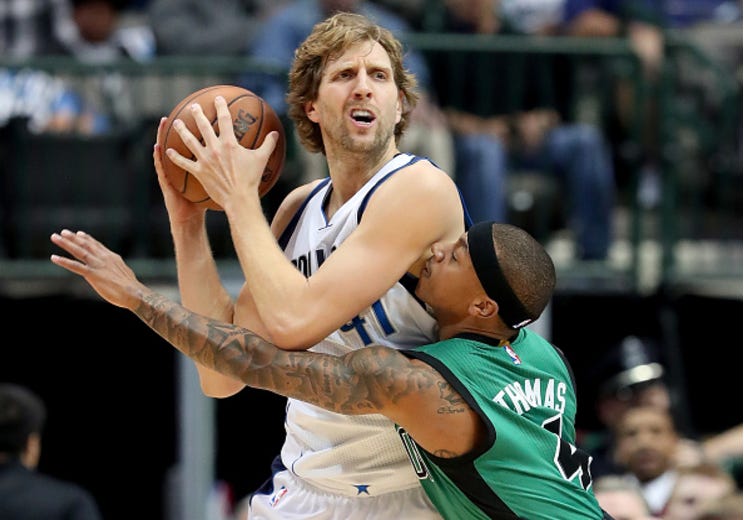 It would have made a whole lot of sense for the Celtics to drop this final game of their long West Coast trip. Playing a team like DAL who historically has owned them, not having won IN Dallas in years, players being out, and with PHI on deck, the early season Celtics probably play down to their competition and ruin all the good momentum they’ve spent the last week accumulating. Instead, they took care of business and have now won 10 of their last 11 games, while keeping separation from WSH and gaining a little bit of ground on CLE.

What we can take away from this trip that should have you feeling pretty good as the All Star break quickly approaches, is the Celtics are starting to win games with full team efforts. I think we all like to joke from time to time about their #depth, but it really has saved their season in my opinion. The Celts have had what, like one or two weeks together fully healthy? In the meantime they’re on a 53 win pace, and when looking at these last four games, the entire roster played a role in each of their wins. The one loss they did have their depth let them down, so while you may not think guys like Olynyk, Gerald, Terry and Young are important to this team’s success, we’re seeing that it’s actually the exact opposite.

Even though the Mavericks have their own issues and struggles, there were still some nuggets that the Celts can take away from this game and file away for the postseason. What are they? Let’s talk about it.

– Finally, we can get back to normal. After a little hiatus, the man is back in the top spot and rightfully so. Isaiah’s 29/8 with just 1 turnover came on a night when he didn’t really shoot the best (47/40%) by his standards, but rules are rules. You continue to ball out at a high level like this, we continue to enjoy your performance uninterrupted. Enjoy.

With no real shot blocker, we got a glimpse of how Isaiah can alter his game. Remember against Utah we saw a lot of high screens that led to semi transition threes. Isaiah put Gobert on an island so to speak. Well Dallas didn’t have that type of shot blocker, so as a result he was able to utilize his dribble hesitation repeatedly in the fourth quarter to help seal this game.

It must suck to drop another 29 points and have it ultimately lower your scoring average, but such is life for Isaiah Thomas. I also won’t ignore how fast he started this game, and that’s what I want from my best player. He clearly realized the importance of finishing this trip strong, and took it upon himself to get things going. That battle between him and Dirk was highly entertaining and not just on the offensive end. Seeing them guard each other was funny because each were at such a disadvantage.

Also important, Isaiah played just 34 minutes. While it would be nice to allow him to get some early nights, that isn’t really the Celtics MO, so I can live with him playing in the 32-34 mpg range.

– It’s no secret the offense has been incredible this trip, which is weird and makes no sense but I will not question it. Their performance in Utah was the best performance by a road team in the NBA this season, and thankfully that good offense made it’s way to Dallas as well. A total of 28 assists on 40 baskets, that’s the type of ball movement that gets the blood flowing to my naughty parts. You expect the eight assists from Isaiah and the four from Horford, but when they say good ball movement is contagious, they aren’t lying. Even Amir Johnson had five!! When the starters set the tone, move the ball consistently, and more importantly hit open shots, they are a beautiful team to watch. The result of good ball movement? Shooting 49/47% for the game. Minus the dud in SAC where they scored just 92 points, the Celtics have lived in the 107-120 range for all 10 of their wins. This offense is working on all cylinders if the Celts play just an ounce of defense most nights, things should work out.

– Look I think every player on this roster is available for the right price. Even Isaiah. You’re silly to say otherwise because guess what, Danny Ainge agrees. Having said that, it is going to have to be a really special player for me to be OK with letting Marcus Smart go. I mean really special. Back in the starting lineup with Jaylen out, Smart threw in 19/3/3/2 with solid percentages and countless winning plays. No surprise he and Isaiah were the most impactful starters with a +11 and +12 between them. But what I want to make a point of has to do with what I said in the open.

Dallas was smart to run a million high P&R’s with Dirk and Isaiah, because it forced that gigantic mismatch. So why should this matter come playoffs? Because we are going to see teams do this and it’s important that the Celtics have a counter. Enter Marcus Smart. As soon as we saw Smart be the one who switches on Dirk, all the sudden it’s no longer a mismatch. Smart is too good at guarding bigs in the post. Remember the work he did on Millsap? So this tells me that anytime the Celtics face a big stretch four in these types of situations, with good communication they neutralize this play with Smart’s defense. Imagine a postseason lineup of Isaiah/Smart/Avery/Jae/Horford, once the playoffs roll around it’s going to be all about helping Isaiah on the defensive end as much as possible, and nobody does that more than Marcus, which is why I’m reluctant to trade him.

– Don’t look now, but Olynyk is quietly shutting up more and more haters and I love it. People (myself included) demand he shoot the ball, and he’s taking more attempts (had 10 last night). People wanted more scoring from him, and he had 15 points. People complained about his lack of rebounding, and he had another 7 last night. Not only is he shooting with more confidence, his awkward moves around the basket are actually working! One of my favorite plays from Olynyk last night was that little slip screen he set at the FT line for an easy layup. I didn’t know he had that type of awareness in him! In the last three games of this trip, Olynyk had 62/48% splits. While I don’t think that is sustainable or anything, it should help quiet the anti Olynyk crowd just a little bit.

– At this point I don’t care who the Celtics play, when they hold a team to under 100 points, I will acknowledge it and praise it because it is like seeing the Celtics make a layup. It almost never happens. Giving up just one 30 point quarter again did the trick, and the defense in that fourth quarter where the Mavs scored just 16 points was the icing on the cake for me.

– The next time Gerald Green misses a shot will be his first. What a run the guy is on, and if you watch him play he is showing no signs of slowing down. His shots per possesion must lead the league. Every time he gets the ball, I know and he knows that he is going to shoot it. The good news is we are in a hot Gerald streak so I can live with it. Will he flame out for like a week or two? Almost definitely. Do I care right this second? Not in the slightest. I say enjoy these last two games before the break and let it fly.

– Did you really think I’d go this whole section without mentioning my man James Young and his +12? Nbd just back to back performances where he not only didn’t shit his pants, but he ACTUALLY HELPED!!! That’s a real thing that happened, there’s film of it. And hey, I am biased, I am the leader of the #FREEJAMESYOUNG movement, but don’t take it from me, take it from Brad

Some will say this was the first time Young looked like he belonged on an NBA court. I say isn’t it crazy that the kid finally gets some minutes and good things happen. Weird.

– Another thing to keep your eye on as the playoffs approach that showed up in this game. The Cs have trouble with “smaller” athletic fours. Harrison Barnes was an absolute mismatch in this game, and that is somewhat concerning moving forward. I do think that’s why we’ll see Brad go with a smaller lineup in the playoffs, it’s not as if they could get any worse at rebounding.

– As has become tradition, the Celtics essentially blew another 15 point lead. I don’t know if it’s because they step off the gas, or this is something mental, or if they just like playing close games so Isaiah plays the whole fourth and does magical things, but that doesn’t make it any less annoying. A blowout here and there wouldn’t kill you.

– Since I am a card carrying member of Team Isaiah, I have no problem with the fact that Yogi lit the Celtics up, but that doesn’t mean it was ideal.

– It was brutal to see The Theory start to become a thing again, but after that first quarter how the Celts came out in the third was all too predictable. Going 8-22 and 1-8 from deep with four turnovers is no way to play on the road, and thankfully luck was again on the Celts side. Throw in their decision to not play defense in this quarter and things really could have gotten out of hand.

– Frankly it was bullshit we had to wait so long to get our James Young appearance. Felt like Brad was very close to giving him a DNP, and I would have written a very angry letter had that happened after his best game in months/years/life.

– The Celtics did not kidnap Andrew Bogut and bring him back with them to Boston. Sort of a missed opportunity if you ask me.

– I think it’s time to get Jonas a new mask, because this one is fucking his shit up way too much. Just go ask Rip Hamilton who his guy was, and hook him up. I’m all for Jonas playing despite the injury, but we’re kidding ourselves if we think that mask can’t be improved.

Unfortunately the Celts now return home for just one game before hitting the road again, but thankfully it’s the Sixers who don’t have Embiid. With Washington playing equally as well over the last two months, winning games like this are important. Over the next 27 games the Celts are basically 50/50 home and away which is good news for them, but all I care about now is getting healthy. I want to be very clear about something. I’ve seen a lot of talk about how the Cs are approaching CLE level and all this stuff, and I want everyone to be VERY careful. The same way a bad stretch doesn’t define a team, neither does this current great stretch. There is a LOT of basketball still to be played, and the Celtics need to get a whole hell of a lot better over the next two months if they even want to THINK about beating CLE in a series. We can enjoy it, but let’s try and have some perspective.

Oh, but if you don’t think I turned all the lights off in my house, lit some candles, and read this tweet 50000000000 times, you don’t read this blog very often. It’s not me saying it, just remember that.