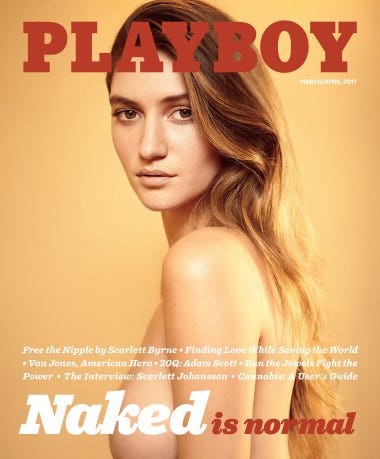 NY Post- No-nudes were apparently not good news at Playboy magazine. The 63-year-old legendary men’s magazine is bringing back nude models in its upcoming issue—one year after banning naked photos in an effort to boost circulation and attract more mainstream advertisers. That effort obviously has failed. The moves comes four months after Cooper Hefner, the son of founder Hugh Hefner and an outspoken critic of the move to ban nude models, was installed as chief creative officer last October.

Surprise, surprise…the magazine famous for nudity’s effort at no longer showing nudity failed! Thank God it did. Men’s Health does the fitness. Barstool does comedy. Playboy does nudity. It’s the circle of life. I’ll always remember sneaking in my attic when I was like 10-years-old to see an Anna Nicole Smith Playboy Tribute my dad has stored away up there. I had heard rumblings of it for weeks and it was a momentous occasion once I finally trekked up there. That centerfold shot? I still think about it in 2017.

Kids today deserve to have that same rush. No one wants to sneak up into their attic to read a story titled “Honor National Pizza Day with this Chorizo Breakfast Pizza”. If I wanted to learn how to make Chorizo Pizza I would watch the Food Network; just like if I wanted to see some nudity as a tyke I would open up a Playboy or head to one of the last surviving blockbusters to rent a hastily-made unrated version of a random knock-off comedy (American Pie Presents: Beta House is my surefire recommendation).

There’s about a 0% chance it matters because magazines are a dying breed AND WE HAVE THE ENTIRE INTERNET OF PORN….but it would be monumental if Playboy somehow outlasted this new age of technology. Keeping nudity after this upcoming issue is our only hope of this.