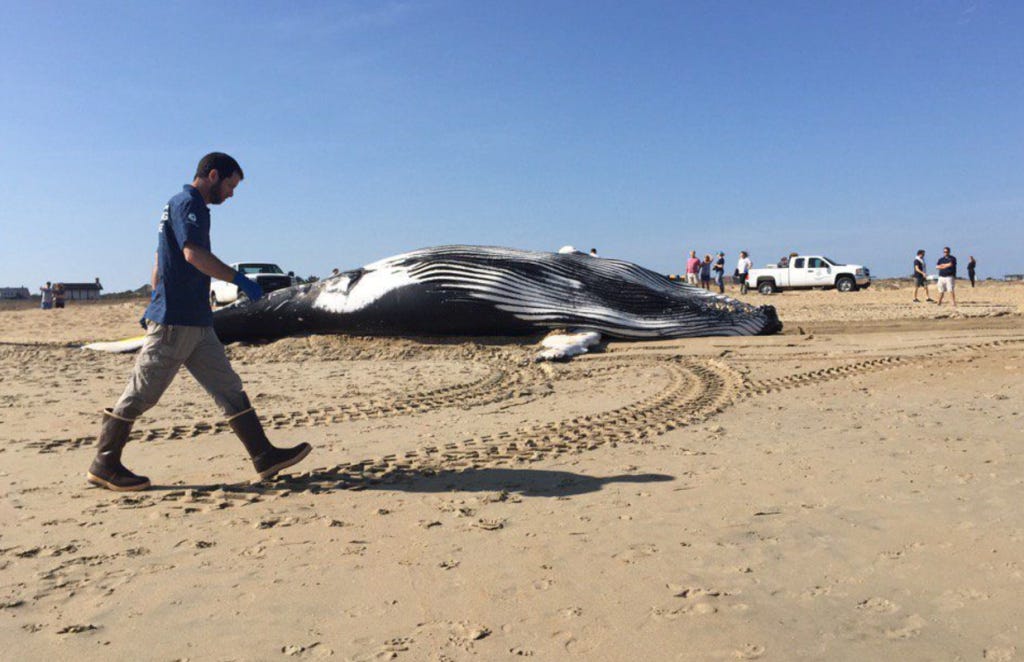 Matt Klepeisz, a spokesman for the Virginia Aquarium & Marine Science Center, said the whale had been reported off the Cape Henry area on Saturday morning and came ashore either Saturday night or Sunday morning at 80th Street.

According to Alex Costidis, an aquarium stranding team coordinator, the whale, after being spotted at Cape Henry, was seen at Rudee Inlet. The stranding team stayed with it Saturday, taking samples from the water until sunset. The whale was reported ashore Sunday morning at 80th Street by a passerby.

Costidis said the black and white whale had “three large propeller wounds.” He estimated the whale was 2 to 4 years old and weighed 13,000 to 16,000 pounds. It measured more than 30 feet long.

Over the course of eight days, three dead whales have been examined for propeller wounds by the stranding team.

“Three in one week is certainly something to take note of,” said Costidis. 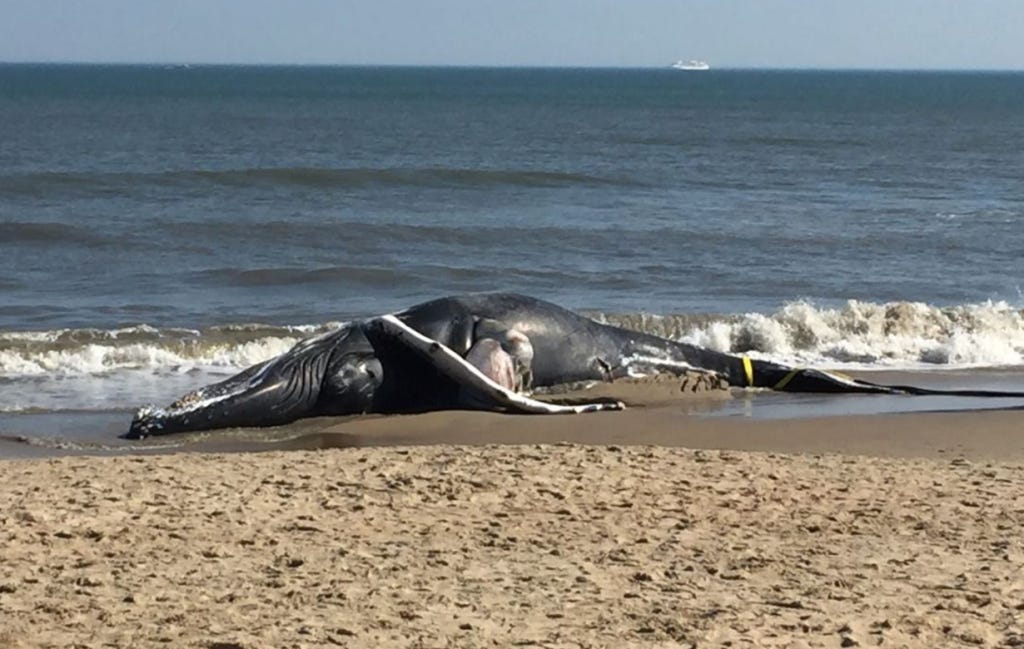 What the hell’s going on out here!? Enough is enough is enough. We already are losing bees at an alarming rate, now we are having whales wash up on shore 3 at a time? This is not something we should take likely. This is not prudent. We cannot sit here and say nothing while 16,000 pound whales are being sliced and diced and throw onto the beach.

Because this is life, we need to decide on someone to blame.

1) We blame the boats. All three whales had propeller lashings. That’s not good. When we send boats into the ocean, they enter into an agreement to sound their horns very loudly, to try not to hit icebergs, and to keep the marine life safe. And based on what I know, they are only hitting 1/3. Boats need to be better.

2) The whales themselves. Hey dumbass whales, there’s a propeller there, someone should move it. If I’m a whale, 10/10 times if a propeller is coming my way, I’m going to swim the opposite direction. Just a hot whale tip I’ve picked up from Lena Dunham. When boats are coming with 8 ton propellers, don’t keep sitting there. 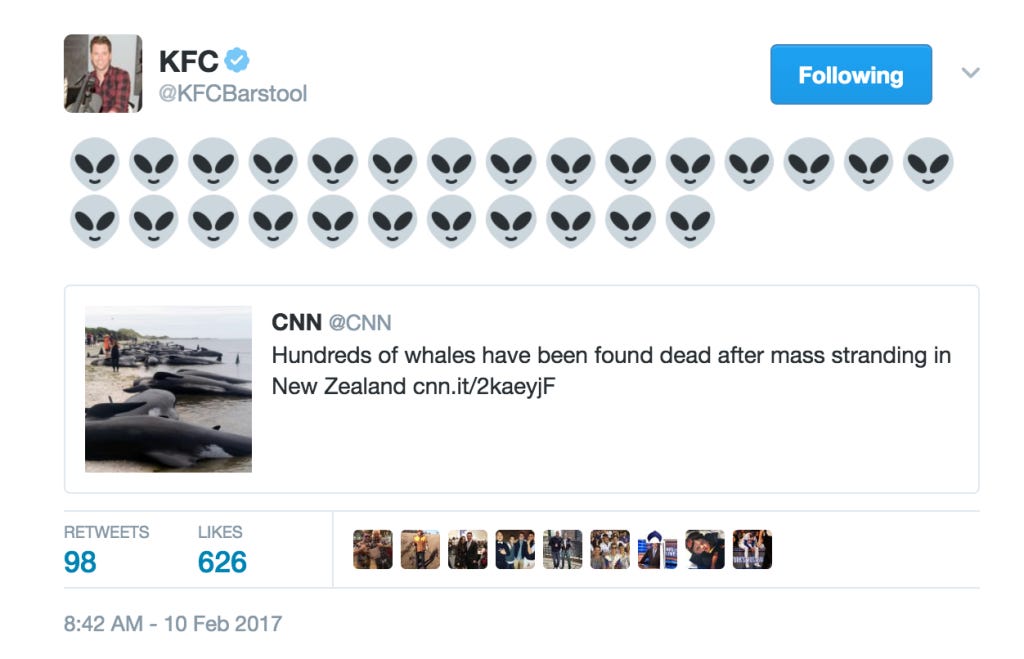 HUNDREDS of whales in New Zealand. 3 in a week in Virginia Beach. Coincidence…or something bigger? It could be the work of a higher being, and it makes sense. Whales are fucking RIDICULOUS animals. It’s wild we are on the same planet as them. 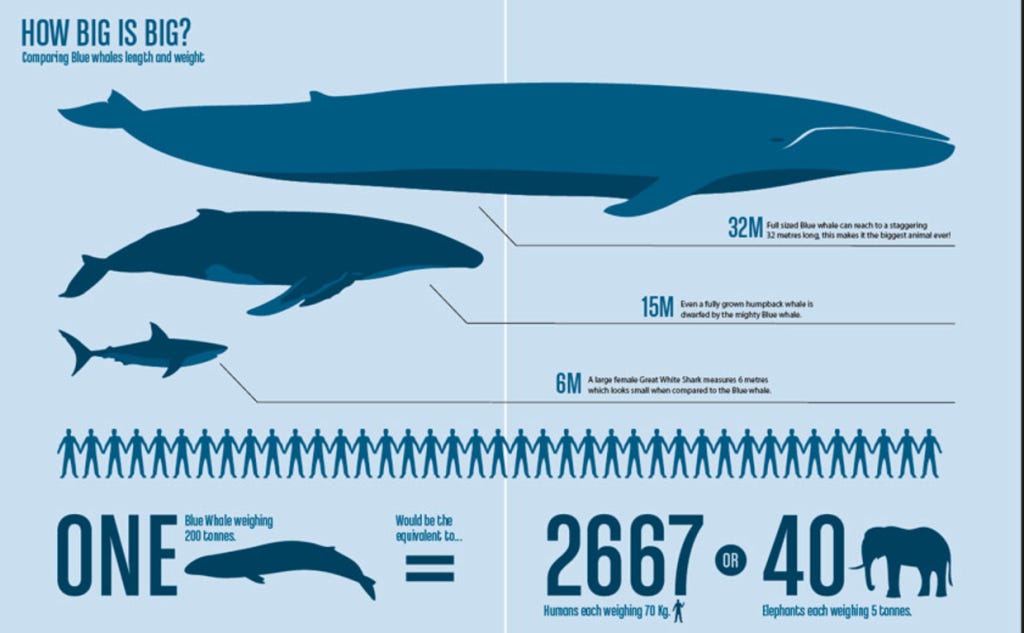 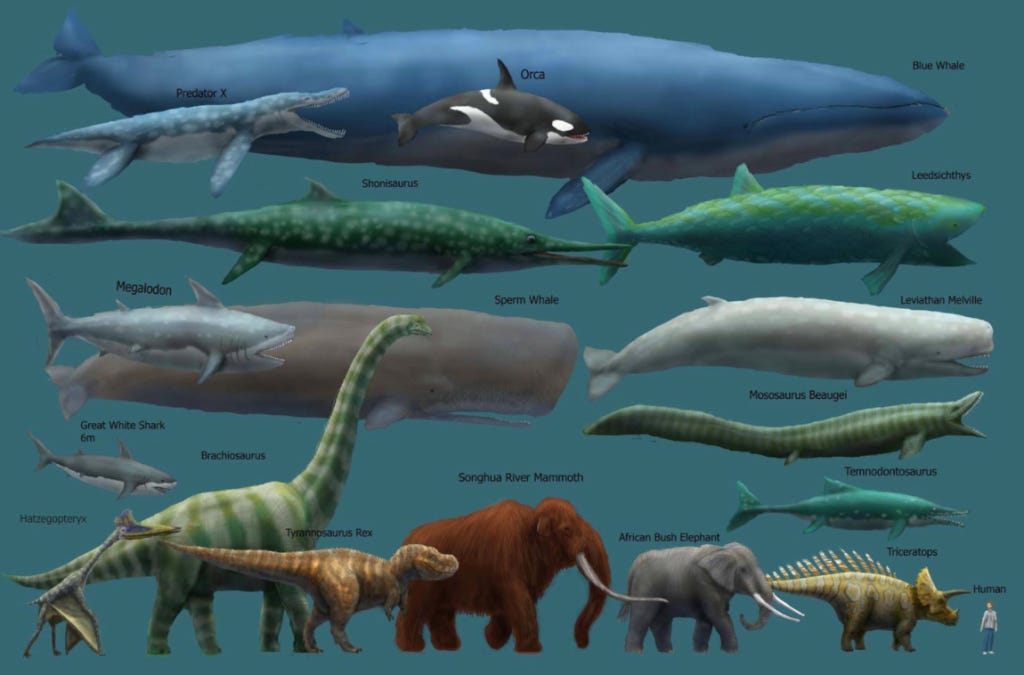 Like, how is it that Free Willy is 1/100th the size of a blue whale? It’s mind blowing shit. So maybe Kevin is on to something here. Aliens might be saving us before those things grow legs and start walking on land and ending society as we know it.