I’m sure by this point, anybody who is clicking on this blog has already seen Gustav Nyquist do his best Dr. Hook impression while trying to carve out Jared Spurgeon’s eye yesterday. If not, here’s the blog on that. Anyway, it was a chicken shit move that you’d expect out of a European and even more chicken shit that he said he didn’t intend on slashing Spurgeon in the face after the game. Listen, man. We all saw it. We know that you meant to do it, you know that you meant to do it, we’ll all have at least a little bit of respect for you if you just come clean and admit you snapped real quick and wanted to take his head off his body. I’m not saying we should have guys doing that every night but I’d at least rather you admit to it. Regardless, it happened and it was only one of the many violent moments across hockey yesterday.

We had the Predators and Stars end up with 24 penalty minutes within the first 45 seconds of their tilt yesterday. 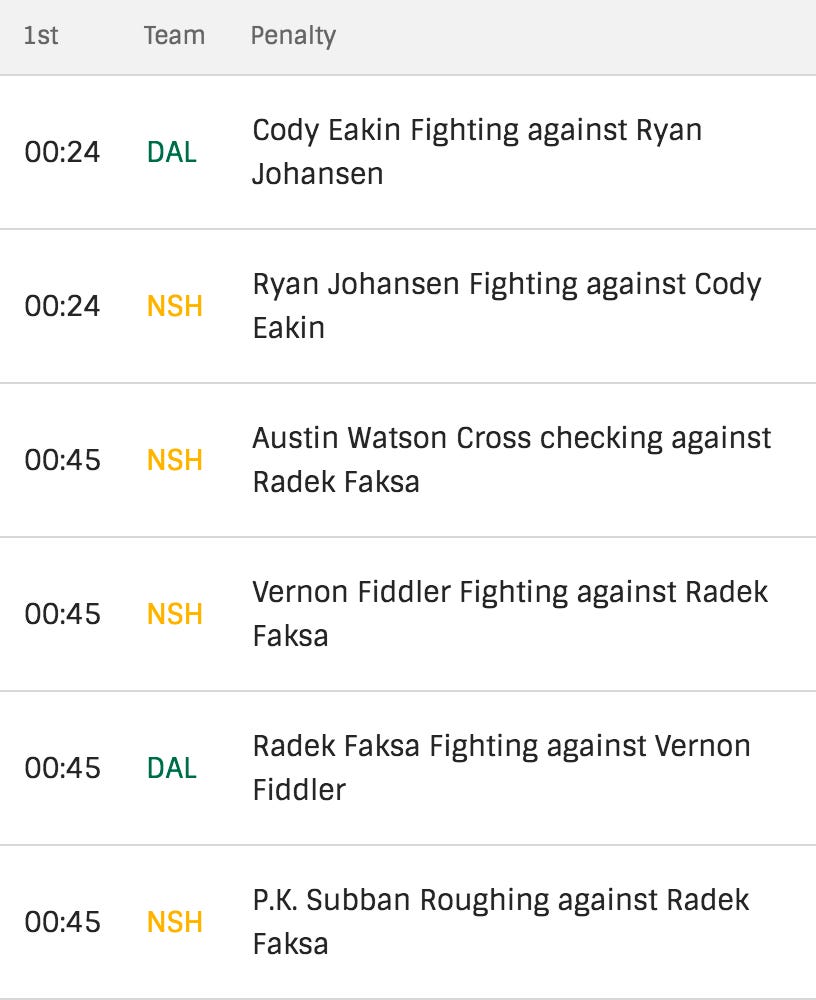 4 fights, a cross check and a roughing. All before most fans were able to park their car and settle into their seats. Not exactly the greatest visual for PK Subban here either. Guy dropped the mitts, threw a punch at Faksa and the refs still only counted it as a roughing minor. Just rubbing it in his face that he throws pillows for hands.

Speaking of fists flying in the 1st minute of the game, let’s make our way on over to Bruins vs Canadiens where Torey Krug and Andrew Shaw had a little business to settle after the opening puck drop.

Pretty decent tilt for the boys. But this lead to a pretty legendary penalty call from Wes McCauley on the mic.

You don’t become a ref in the NHL by accident. You don’t just fall ass backwards into this job. You have to earn it every step of the way the same way that the players do. Obviously Wes McCauley has the “it” factor here that separates him leaps and bounds above the zebras you’ll see at your local rink calling peewee games at 9:30 on a Saturday morning. Fucking McCauley, man. Need this guy on a tshirt ASAP.

And now staying with the Bruins vs Habs game but going back to the original theme of sticks to the face, let’s watch as Alex Galchenyuk invites himself to the Psycho Party that was going on across the NHL yesterday.

Down 4-0 in the 3rd period. Getting bodied along the boards by Kevan Miller so he decides to just give Miller some free dental work and take a hack at his mouth. What a little weasel. This looks a little more incidental than the Gus Nyquist whack job but I’m just going to assume Alex Galchenyuk isn’t very sorry that this happened. Sort of one of those “it would sure be a shame if Miller hit me into the boards a little too hard and my stick accidentally came up and whacked him in the face” kind of moments. And Miller wasn’t the only one taking a trip to the dentist in last night’s Bruins vs Habs game.

Here’s linesman Brian Mach taking a Jimmy Hayes blade straight to the chops. The stripes really got their moneys worth out of last night’s game in Boston.

Finally, we bring you one of the most beautiful sights you’ll ever see as human piece of shit Alex Burrows gets bundled by Justin Falk after trying to start shit with Robin Lehner.

Alex Burrows is truly a cock sucker. I mean that in every sense of the word. Dude just loves to suck on cock. Not that there’s anything wrong with that. I’m simply stating a fact here. Anyway, I guess he didn’t read the scouting report which clearly says Lehner is a legitimate psychopath and will 100% try to murder you if you ever cross him. Well he had to find that out the hard way and seeing him get destroyed like that just makes me feel all warm and fuzzy inside.

What a day it was in the NHL yesterday. And on the Lord’s day no less. Love the boys putting in that weekend warrior work. MAKE HOCKEY VIOLENT AGAIN!!!

UPDATE: Got a couple names wrong in this post. I’m not an excuse guy but it was Monday morning when I wrote it so pardon me for having mush for brains to start the week.