Well folks the biggest mastubatory night of the year is finally done as the Grammy awards came and went with all the understated tact of a Michael Bay or Asa Akira movie. The fact they continue to schedule these award’s on the first sunday without football in 9 months just shows the contrast between good ways to spend your sunday like NFL season and the scraps we’re begging for after its over. The Grammy awards have just become participaton trophies that you get for putting out a album the same year as Beyonce.

But moreover, what should of been a fun night of watching Tim McGraw for some reason and Metallica turned into a disaster of Titanic proportions. Rhianna was caught drinking in public for the whole show (I have since filed a complaint with the city of Los Angeles), and for the 59th straight year, Best Country performence did not go to the United States.

Anyone with a brain watched the show last night and thought the same thing: Why is my money going toward’s funding things that other people enjoy that I personally dont enjoy as much. Why is my taxes going to line the pockets of Beyonce who puts out great music during the regular season but allways chokes at crunch time. Art is the United States is Overrated and we should stop spending money on it.

The United States spends 150 million dollars per year on the national endowment for the art’s, and this year we only won like 12 grammys. Thats a horrible ROI. Who is making these deals? Compare that with all the kids we educate every year who never win a Grammy and you’ve got legions of future adults with dreams of stardom running around with no potential for success in the music industry. And you know who else was a failed artist? Thats right, it was Hitler. In other words the United States is churning out hundreds of millions of potental fuhrers each year by telling kids that they can be a painter or whatever. For every rapper trying to become the next “Chance” youve got 10,000 more on the fast track to being Chancellors.

From a basic math standpoint, funneling money into the arts is a big waste of resources. The US could of started almost a quarter of a brand new war with all the money we’ve wasted on Art in this country in the past 150 years. When was the last time a artist The best spoken word album of alltime is the Bible, but you dont see the Catholic Church demanding to get gold plated icons & statues just so they can show off how much people love them. They say that religion is the opiate of the masses, but with all do respect to The Young Pope, I dont recall any religious leaders ODing at the age of 27. Seem’s like investing in the archdioses is a much better way to reach our nations youth then giving it to music teachers.

Plus, the Grammys is the only award your more likely to get if you die. What kind of message are we sending to our children by telling them the quickest way to being a celebrity is if your dead? Death is a PED for music and as far as Im concerned singing is a alive-mans game. Music only exists because weird kids arent able to give strong enough takes naturaly so they have to enhance there words and sounds with pitch and rhthym in order to get chicks to pay attention to them. Maybe if David Bowie had been a real man like Mike Lupica, he would of been writing in the student newspaper asking if the British national soccer team choked in the world cup because none of there players had wartime service records, but instead he had to resort to music- the ultmate gadget play when it comes to making girls notice you.

Heres how I know music is a fraud: All the best songs are about sports. The Fox NFL injury music conveys more raw emotion in 30 seconds then Beyonces entire discography. Plus, Beetoven was the best songwriter of all time & he was deaf. And after hearing Adele refuse to FFANK the troops again last night, I kind of envy him. 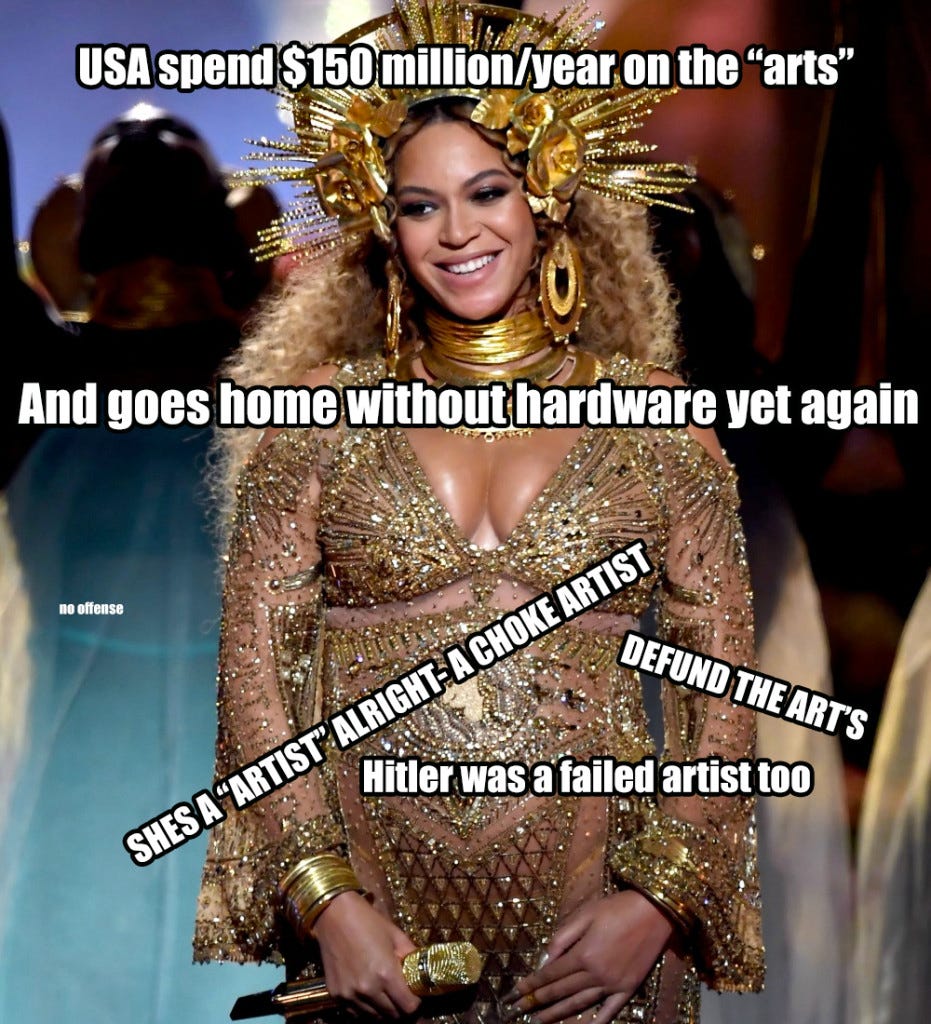 If theres anyone who knows how to burn someone w a lick its Shady whose experienced as many bumps and sores in the bedroom as on the gridiron.

1. Allowing cats in the Westminister dog show is a national disgrace and one that our country will likeley never live down. The only award a cat should get is the award for animal that secretly wants to kill you even though you feed it and try to love it. Humans are stuck in the friend zone so hard on cats its not even funny. Plus in nowdays America, the winner always comes from the non-working group. Makes you think.

2. Kid Rock is being considered by Michigan Republicans as a possbility to run for Senate in 2018. Well I’m packing up my game and Im a head to DC, and exercise my right to levy taxes and sign foreign treaties. If this all ends up with Kid Rock blowing lines off Melanias chest and drinking red stag out of her butt then I think 2017 will of all been worth it no matter which side of the political aisle you stand on.

Heres the thing about Kid Rock Ive allways said- the guy has somehow managed to lift lyrics and samples from such prevously unknown artists as Lynyrd Skynyrd, Warren Zevon, Metallica, and Sugar Hill Gang and managed to turn them into hits. He could introduce some cover legislaton to unify the country again like reproposing the 14th amendment or eliminating prohibition again just to make the country put its hands together and remember the good times.

3. In a long, slow, sticky, moist intervew with Peter King, Tom Brady claims that the Superbowl wasnt his best game ever which should make us all question whether or not he has the clutch gene.

Also in this intervew, Brady says “I have zero pain… I feel 100%” which is interesting considering he was listed on the injury report like every week. Is Tom Brady a hypochodriac? Theres no other explanation for having a bogus condition appear all of the sudden on gameday when he’s not actually injured unless the Patriots are playing fast and loose with the NFLs reporting rules.

4. Adam Schefter is a trader. ESPN is putting Schefty on sideline duty for NBA games starting this week for a Knicks/Thunder game and could be a distraction with his NFL reporting gig. Schefter is a little nugget weilding gopher but he’s in danger of falling to far behind NFL Network’s Ian Rapaport as it is and seeing him report breaking NBA news is going to be like watching Bob Dylan go electric. Terrible longterm career move.

5. The film is out on Donald Trumps nucular football holder and lets be honest here he’s carrying that thing like a loaf of bread. It was always a concern with Trump that the small hands would make for poor securty so lets hope that there’s a Tuck rule still in play.

6. Michael Bennet is declining a trip to Israel after finding out that it is being paid for by the Israeli goverment. As the leader of the NFC West Banks best defense, Bennet feels like he shoudnt accept the trip if footage is going to be used in a PR campaign aganst Palestinians. If there looking for a washingtonian who opposes a two-state system they should consider Dan Snyder who enjoys screwing over both Virginia and Maryland. 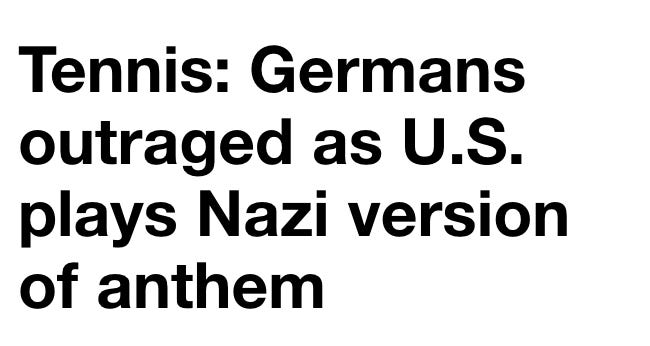 Why would there be a nazi version of the US national anthem in the first place and if so, Id have to imagine it woud absoluteley crush Beyonce at the Grammys

8. Thoughts and prayers to Bill Snyder whose been diagnosed with throat cancer. In a Ultmate football guy move, he is going to keep coaching and I truly beleve that his medical treatment combined with screaming at players could scare the disease right out of his body and send it packing up to move back in with momma. Its called cancer not cantcer and Mr. Snyder knows that better than anyone. Someone need’s to fact-check me on this one but I think hes the only coach in NCAA football to coach in a stadium thats allready named after him which is like having sex with your pregnant wife- its the ultiamte job securty and he’s earned it. A football guy gets more focused with every additional distraction that he has to ignore, and Bill Snyder certainly fits that mold. Were rooting for you.

9. Steve Young need’s to focus more on taking ownership of his analyst duties and less on taking ownership of private busnesses. In a profile on Bloomberg, Steve admitted that hes more interested in his outside private equity deals then he is on paying attention to football games. Steves dad, whose name LeGrande Young literaly translates to Big Boy, should treat Steve like a Outkast until he gets his act together and focuses on what really matters and thats his televison hosting duties doing pre-game analysis for Monday Night Football. If your only putting in a couple hours of prep, Ron Jaworski is going to eat your lunch and put the clown shoes on you. I dont really know what private equity is but it sounds a awful lot like Bar Rescue and if you think for one second that Jon Taffer would tolerate one of his employees focusing more on protecting his yield than protecting the shield you dont know anything about bar science.

Shout out to Blanca but if were being honest his scouting report leaves alot of questions unanswered. Was his mother a prostute and whats his smile like?  Like to delve deep into Balrog’s wonderlic score as well and see if he actualy paid for any of those tattoos.

69 of the week: Trenton Thunder

I feel like in a alternate life I was destined to be the marketing director for a minor league baseball team and this has just convinced me of how right I was. The Trenton Thunder offer discounted ticket’s for $6.90 when the temperature is exactly 69 degrees.