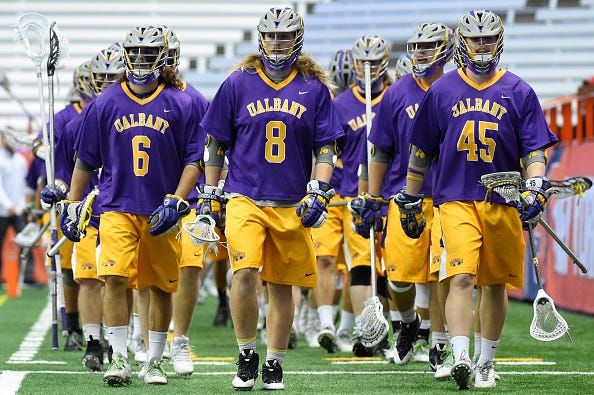 In case you were living under Iraq, the Albany Great Danes lacrosse team took over the world last year. And by “took over the world” I mean “probably stole your girlfriend if you brought them anywhere near a 10 mile radius of the team”.  Kids like Derrick Eccles became legends and/or possible serial killer suspects for their roster headshots and it was great to watch them play on the field exactly how they look. Like a bunch of wild savage boys.

Anyway, all great things must come to an end and Albany’s season died in the hands of Syracuse last year in the NCAA tournament. As fate would have it, they open up their season this year against Cuse in the Carrier Dome and the boys are back looking as homeless as ever. We have some familiar faces in the crowd and some newcomers to fill the voids left behind by Derrick Eccles and Blaze Riorden graduating. So without further ado, here are your 2017 Albany Great Danes. 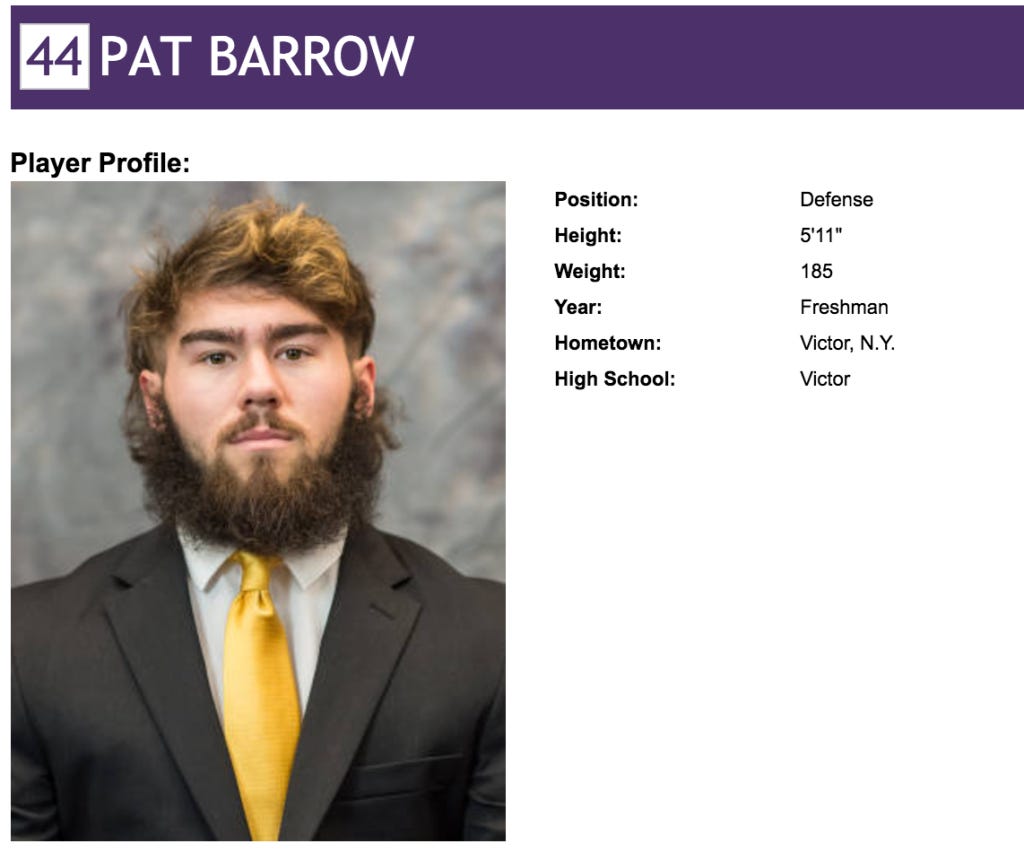 The scariest thing about Pat Barrow is his player profile says he intends to major in “human biology”. Which, from the looks of him, tells me that he’s at least considered eating another human before and now he’s just studying to figure out how to perfectly dissect them. So if I’m an opposing attackman and I have #44 covering me this year, I’m shitting my pants. Because I know I have to dodge against a future cannibal and that’s just not something I signed up for here. That’s how you get the mental edge over your opponent. 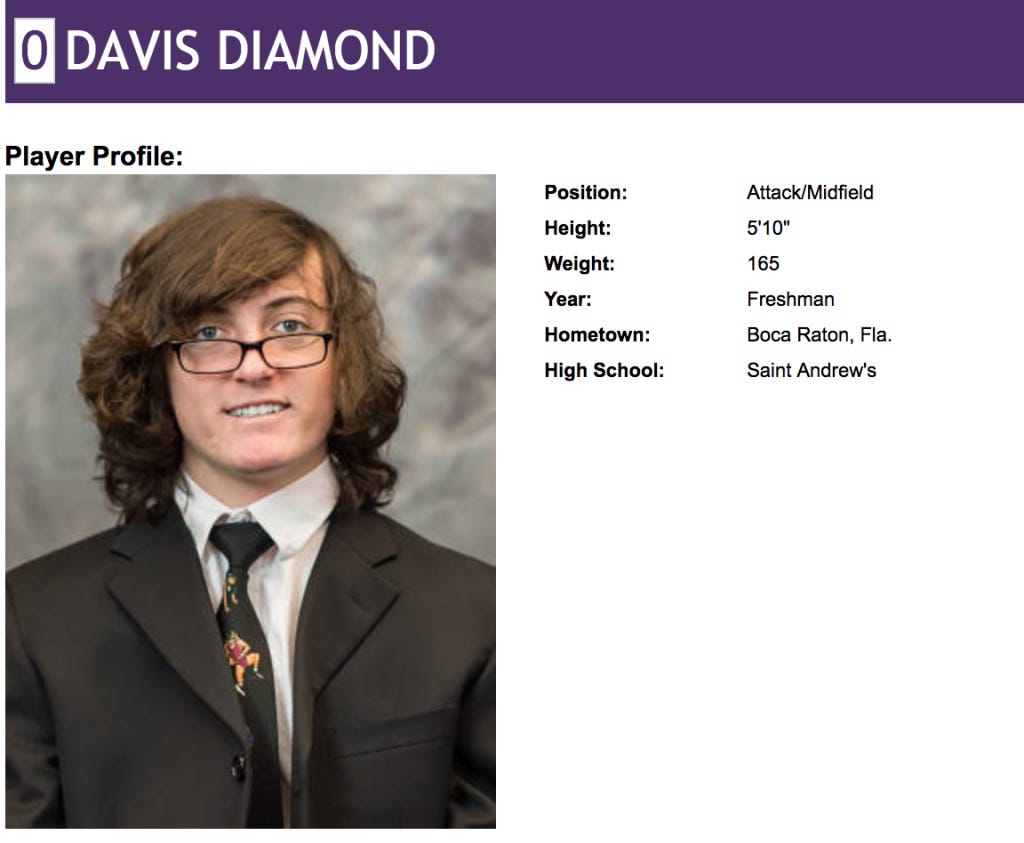 Davis Diamond looks like if Harry Potter got real into smoking pot at Hogwarts and decided to give up his Quidditch broom for a lax spoon. Which actually doesn’t sound like too bad of a life. Imagine being high in Hogwarts and seeing all the magic go on around you? Would be hella sweet. Especially if you could get that little prude minx Hermione to blaze up with you. Now we’re talking. But yeah, that’s Davis Diamond for ya. Freshman out of Boca Raton, home of the Boca Raton “Wet The Beak” Ponzi Scheme Awareness Bowl Presented By Pardon My Take Presented By Barstool Sports. 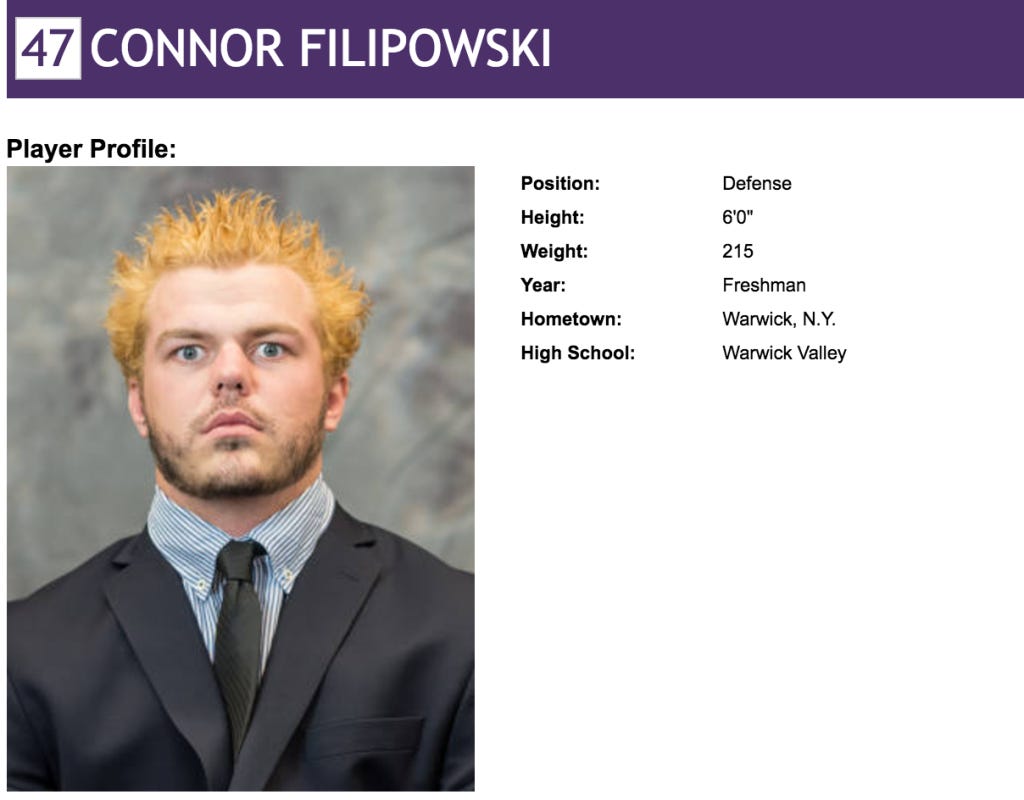 A chill just went down my spine from staring into those eyes. As if he just returned from serving a tour in Vietnam and now he’s completely devoid of any sort of emotion. Connor Filipowski doesn’t have feelings and if he does, I’m assuming it’s purely rage. Which brings us to the Heat Miser hair. Similar to Pat Barrow. If I know I have Albany on my schedule this year, I’m calling my parents and telling them that I love them now. Because who knows if I’ll be able to make it out of that game alive. 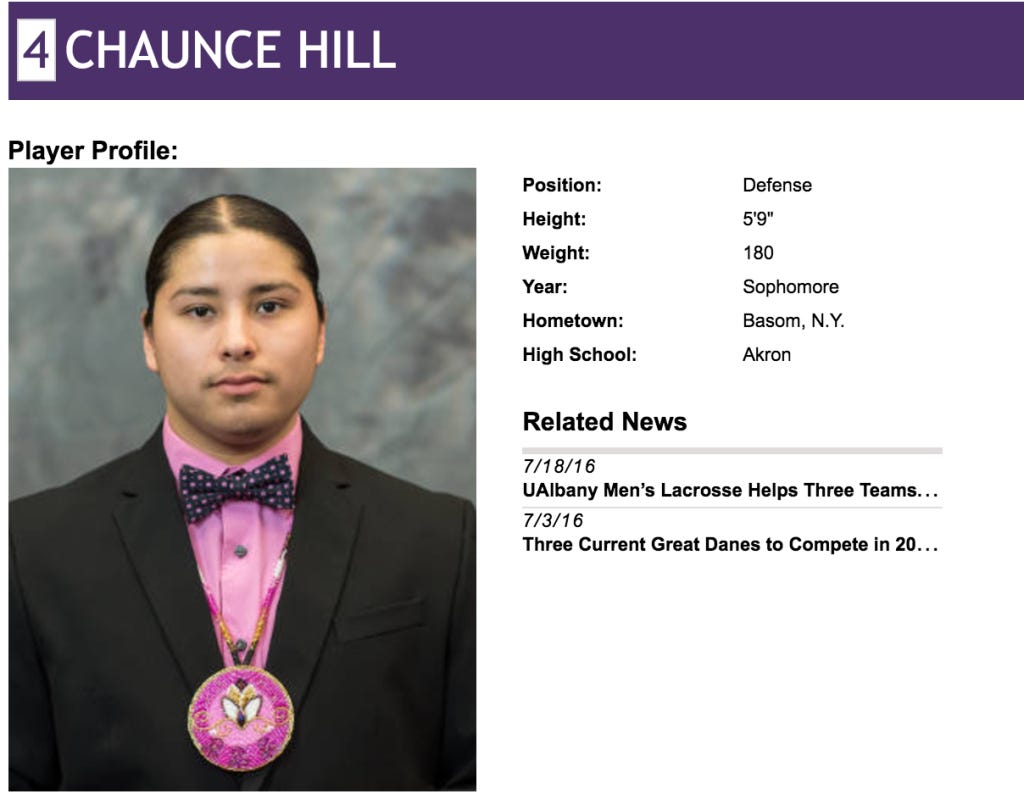 Been 3 straight freshmen so far off the bat so it’s nice to finally see a familiar face again. Chaunce Hill came into the lineup super understated last year aside from the medallion. Kid came in with a customized UAlbany medallion and it was pure electricity while the rest of the get up seemed rather reserved. This year, however? Well it’s a New Year, New Me for Chaunce Hill. You don’t wear a hot pink dress shirt with a hot pink medallion unless you’re there to fuck shit up this year. Good for Chaunce. 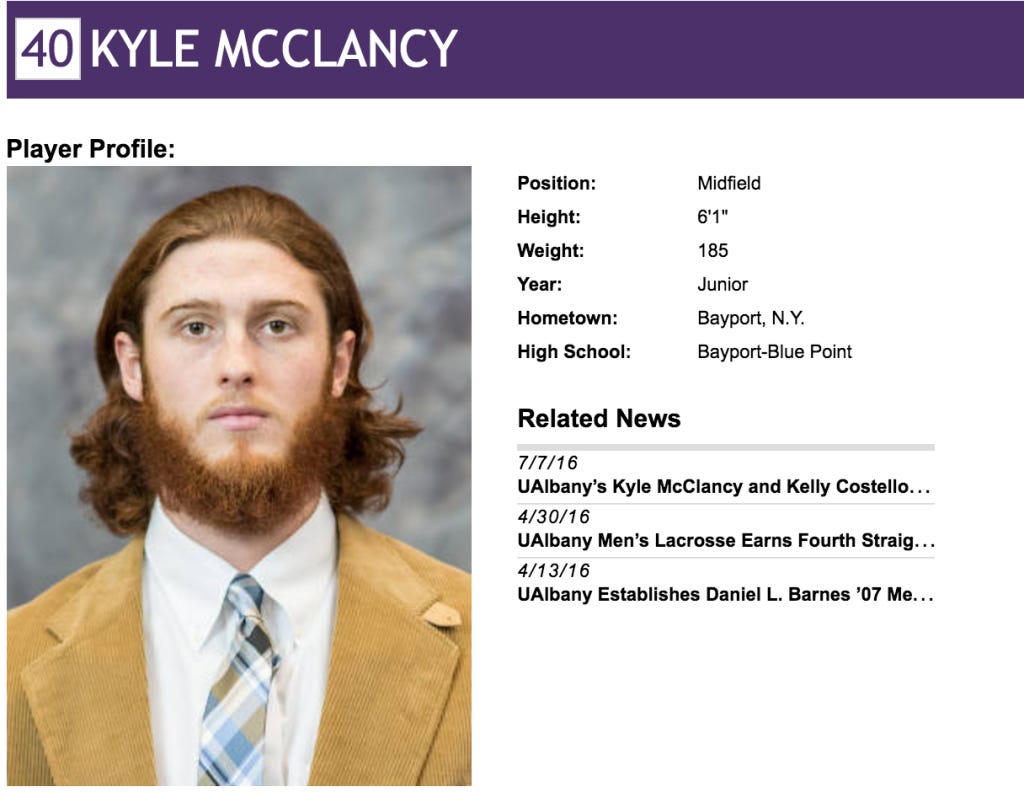 First off, Kyle McClancy has that “Cult Leader’s Right Hand Man” look down pat. Second off, I just want to show you what playing lacrosse at the University of Albany will do to you. Because Kyle McClancy is a junior. You’d think with a look like this, he would have been featured last year, no? But let’s take a closer look at a little before and after for Kyle McClancy. Because here’s what the kid looked like last year. 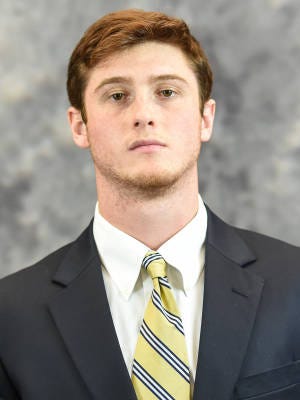 Looks like a good kid. Probably on track to work at his dad’s insurance agency or something like that after college. But now? After he fully committed to the Albany lacrosse program? Well now he’s destined for greater things. I couldn’t be any prouder of this transformation. Feels like I’m watching my kids grow up right in front of my eyes. 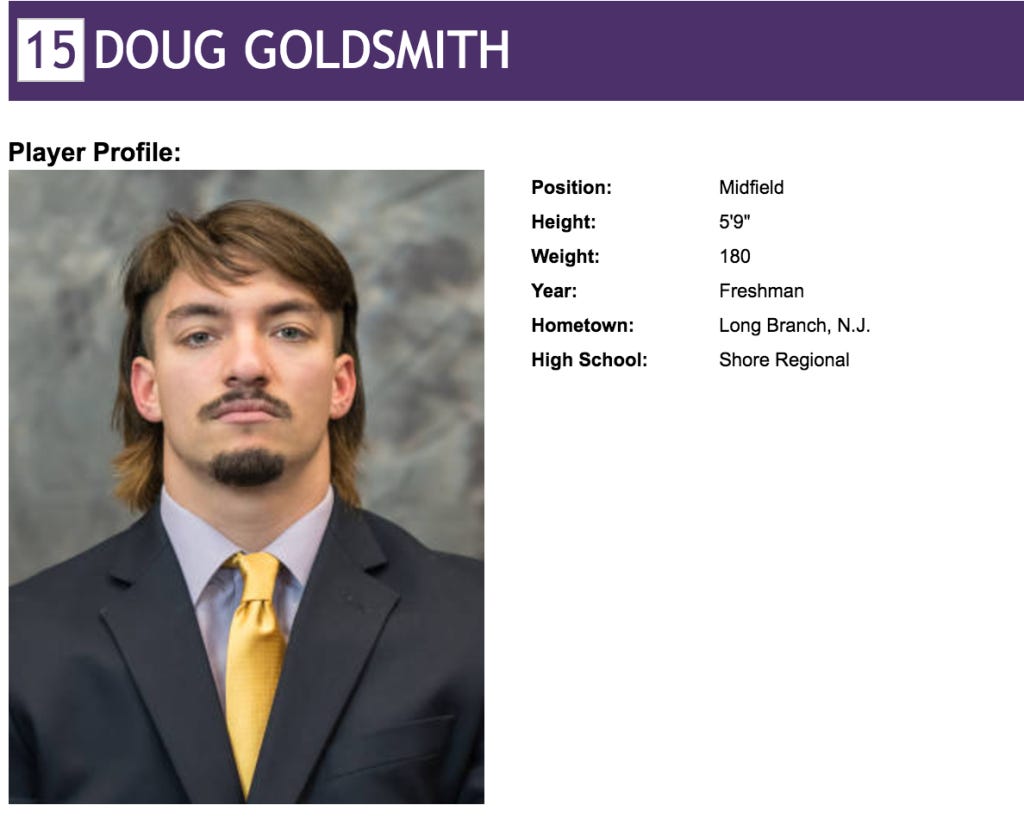 Listen. I don’t want to be a rat or anything. I don’t want to get Doug Goldsmith or the University of Albany in trouble here. But I’m almost 100% positive I’ve seen this kid on at least 13 episodes of “Cops” over the past decade. Almost certain that Dougie Fuckin’ Goldsmith is one of the main characters in “Cops”. He just goes by a few different aliases, though. Most of them being Cleetus. 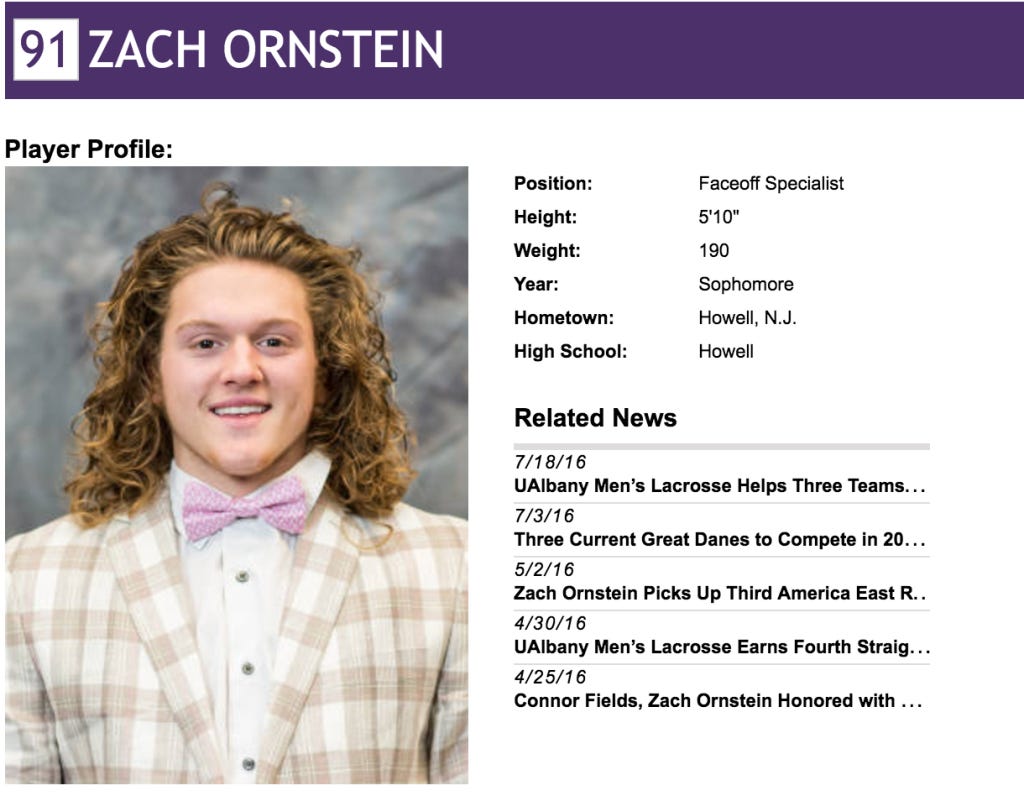 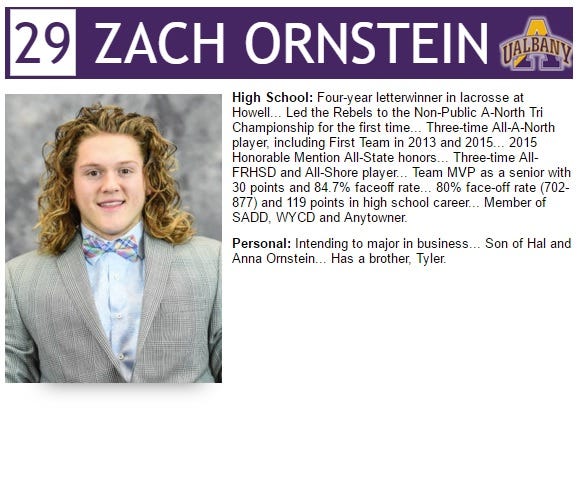 Still looks like if Spicoli and some frat star at Georgia or some shit like that had a love child. “Intending to major in business” is still sneaky hilarious. Still just a great euphemism to say that he doesn’t go to class ever, just chills in his room, smokes weed until lax practice, rinse, repeat. But he DID get that number changed from 29 to 91. Not sure how I feel about a FOGO rocking 91 but for Zach Ornstein, I’ll allow it. The Flow God has earned it. 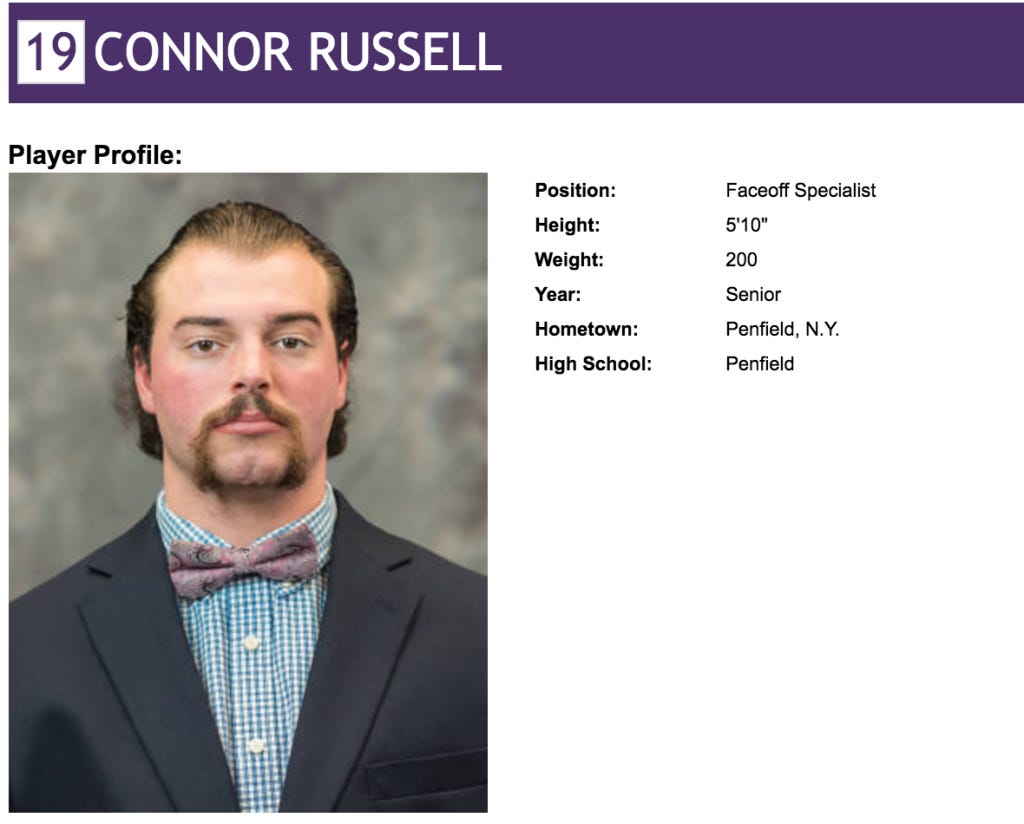 Absolutely LOVE this look from Connor Russell. Looks like he’s dressed up for court right now but you can usually catch him shirtless, wearing a pair of cut off jeans while polishing off a case of Coors Light on his way to pick up his son from soccer for the weekend because the old lady got custody during the week. Setting the o/u on empty cans of dip laying around Connor Russell’s truck floor at 18.5. Only packs long cut, too, ya pussies.

So yeah. Albany opens up their season a week from today in Syracuse. Then a month from today, we could see a potential National Championship preview with Albany taking on Maryland on March 11th. All I’m saying is don’t be surprised if you see the Danes playing on Memorial Day Weekend. Look good, feel good, play good. And that’s the word of the Lord.